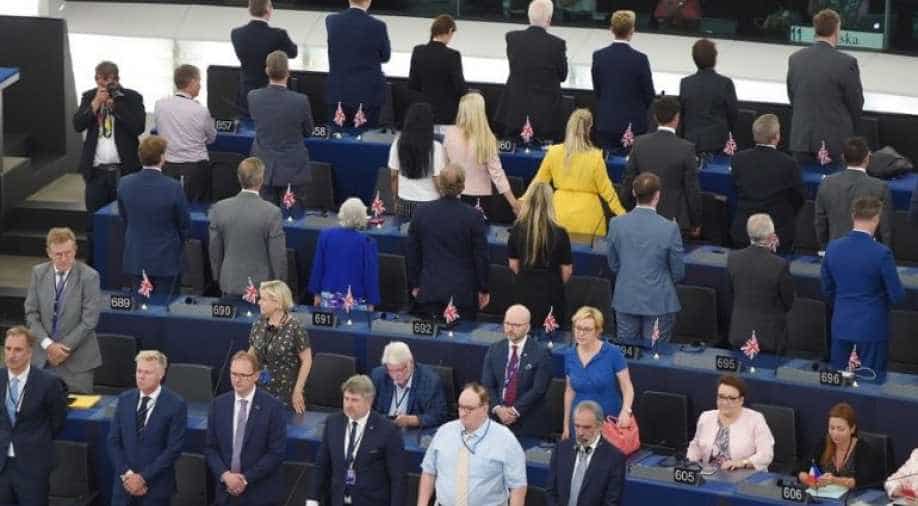 The 29 UK deputies from the party of pro-Brexit firebrand Nigel Farage turned away from a performance of Beethoven's "Ode to Joy" by several musicians in the 751-seat chamber.

The Brexit Party's "cheerfully defiant" deputies took their seats Tuesday in the new European Parliament, turning their backs on the European anthem and insisting they will be gone by October 31, Britain's new EU exit deadline.

Nigel Farage, wearing a purple tie and light coloured suit, made a triumphant arrival as leader of the Brexit Party, which won more votes than any other national party in the European elections in May.

And the 29 Members of the European Parliament (MEPs) were quick to show their defiance, standing up and turning away from a performance of Beethoven's "Ode to Joy", the European anthem, by several musicians in the 751-seat chamber.

The MEPs have castigated Britain's Conservative government for failing to take Britain out of the bloc by the original March 29 deadline and insist their election results show the wind is behind their sails.

Farage, a veteran of the EU chamber since 1999 who campaigned for Britain to leave the bloc in a 2016 referendum, warned of a "turquoise takeover" in the UK if the Conservatives failed to deliver a divorce.

His Brexit Party — whose official colour is turquoise — is the national party with the largest delegation, just ahead of the Northern League of Italian Interior Minister Matteo Salvini with 28 seats.

Opposite Farage were Britain's anti-Brexit Liberal Democrats, who also performed well in the EU elections and arrived in Strasbourg with bright yellow t-shirts emblazoned with "Bollocks to Brexit" and "Stop Brexit".

All in all 73 British MEPs took their seats in the assembly of the eastern French city of Strasbourg.

When Brexit happens, 27 of the British seats are to be redistributed to other countries and another 46 set aside for future EU enlargements.

Farage, who told MEPs here a few months ago he was hoping to be speaking to them for the last time, said he now expected to leave the assembly October 31.

His colleagues echoed his point.

"I hope to be unemployed in four months," said Henrik Overgaard-Nielsen, a Brexit Party MEP who is Danish but elected in Britain.

MEP Alexandra Phillips said her party will make sure Brexit is delivered by EU institutions and the new prime minister that the Conservative Party is to elect soon to replace Theresa May.

May resigned after failing several times to get the British parliament to endorse the divorce deal she struck in Brussels last November, with hardliners in her own party rebelling.

It led to EU leaders granting several delays for Brexit, the latest being October 31.

"We're here to put pressure on the UK government and everyone inside these institutions to make sure that the democratic mandate of the Brexit vote is actually delivered," Phillips said.

Overgaard-Nielsen said: "By the end of October, we'll pack up and go home, and Britain will be independent."

Though long a thorn in the EU's side, Farage saved most of his ire for British politicians rather than eurocrats like Michel Barnier, who led the EU's negotiations with May's government.

"We shouldn't be here but I'm not actually particularly angry at the European Union or Mr Barnier. They've done their job and they've done it well," Farage said.

"It's the British political class that have done it very, very badly."

Farage sent a populist message to Theresa May and the 27 other EU leaders who were in Brussels Tuesday to decide on the bloc's top jobs following the elections.

With Britain set to leave, he said, May should abstain from voting for Dutch Social Democrat Frans Timmermans as head of the new European Commission, the EU's executive arm.

"He (Timmermans) is a fanatic, he wants to crush the nation-state, he wants a United States of Europe," Farage said. "He's a very dangerous man in my opinion."