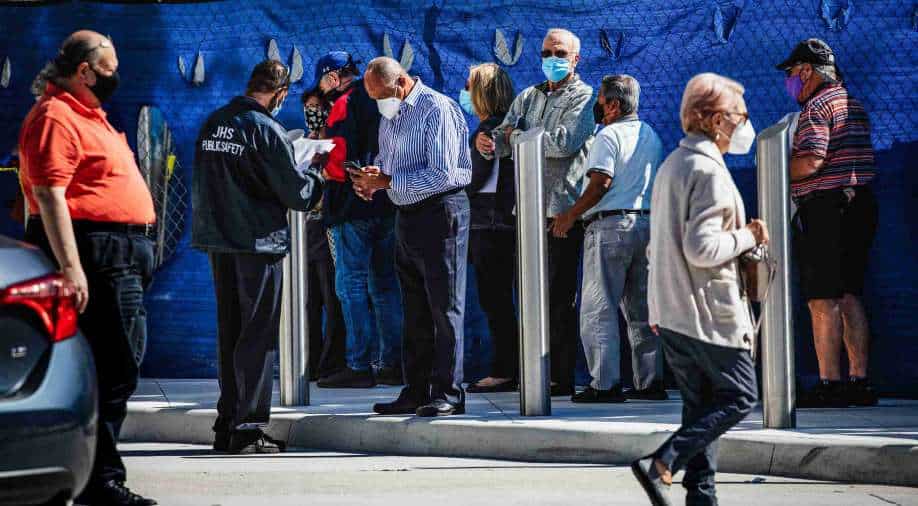 Some public health officials worry that doing so could bring even more chaos to the complex operation and increase the likelihood that some of the highest-risk Americans will be skipped over.

Just weeks into the country’s coronavirus vaccination effort, states have begun broadening access to the shots faster than planned, amid tremendous public demand and intense criticism about the pace of the rollout.

Some public health officials worry that doing so could bring even more chaos to the complex operation and increase the likelihood that some of the highest-risk Americans will be skipped over. But the debate over how soon to expand eligibility is intensifying as deaths from the virus continue to surge, hospitals are overwhelmed with critically ill patients, and millions of vaccine doses delivered last month remain in freezers.

Governors are under enormous pressure from their constituents — especially older people, who vote in great numbers and face the highest risk of dying from the virus — to get the doses they receive into arms swiftly. President-elect Joe Biden’s decision, announced Friday, to release nearly all available doses to the states when he takes office Jan. 20, rather than holding half to guarantee each recipient gets a booster shot a few weeks after the first, is likely to add to that pressure.

Some states, including Florida, Louisiana and Texas, have already expanded who is eligible to get a vaccine now, even though many people in the first priority group recommended by the Centers for Disease Control and Prevention — the nation’s 21 million health care workers and 3 million residents of nursing homes and other long-term care facilities — have not yet received a shot.

On Friday afternoon, New York became the latest state to do so, announcing that it would allow people 75 and older and certain essential workers to start receiving a vaccine Monday.

But reaching a wider swath of the population requires much more money than states have received for the task, many health officials say, and more time to fine-tune systems for moving surplus vaccine around quickly, to increase the number of vaccination sites and people who give the shots, and to establish reliable appointment systems to prevent endless lines and waits.

Some states’ expansions have led to frantic and often futile efforts by older people to get vaccinated. After Florida opened up vaccinations to anyone 65 and older late last month, the demand was so great that new online registration portals quickly overloaded and crashed, people spent hours on the phone trying to secure appointments, and others waited overnight at scattered pop-up sites offering shots on a first-come, first-served basis.

Similar scenes have played out in parts of Texas, Tennessee and a handful of other states.

Still, with CDC data suggesting that only about one-third of the doses distributed so far have been used, Alex Azar, the health and human services secretary, told reporters this past week, “It would be much better to move quickly and end up vaccinating some lower-priority people than to let vaccines sit around while states try to micromanage this process. Faster administration would save lives right now, which means we cannot let the perfect be the enemy of the good.”

The CDC guidelines were drawn up by an independent committee of medical and public health experts that advises the agency on immunization practices; it deliberated for months about who should get vaccinated initially, while supplies were still very limited. The committee weighed scientific evidence about who is most at risk of getting very sick or dying from COVID-19, as well as ethical questions, such as how best to ensure equal access among different races and socioeconomic groups.

Although the committee’s recommendations are nonbinding, states usually follow them; in this case, the committee suggests that states might consider expanding to additional priority groups “when demand in the current phase appears to have been met,” “when supply of authorized vaccine increases substantially” or “when vaccine supply within a certain location is in danger of going unused.”

Dr. Kevin Ault, an obstetrician at the University of Kansas Medical Center who serves on the advisory committee that came up with the CDC guidelines, said that it was reasonable for states to start vaccinating new groups before finishing others but that they should be careful about exacerbating inequities and biting off more than they can chew.

“Obviously if you’re going to vaccinate that group, you need to have a well-thought-out plan in hand,” he said, referring to the over-65 population. “Having people camping out for vaccine is less than ideal, I would say.”

He added, “We put a lot of thought and effort into our guidelines, and I think they are good.”

After the first vaccines were given in mid-December, a dichotomy emerged between governors who were adhering precisely to the guidelines and others who moved quickly to populations beyond health care workers and nursing home residents.

Until Friday, Gov. Andrew Cuomo of New York, a Democrat, had threatened to penalize hospitals that provided shots to people who are not health care workers. By contrast, Gov. Ron DeSantis of Florida, a Republican, traveled to retirement communities around his state to emphasize the importance of getting people 65 and older, who number more than 5 million there, immunized fast.

“In Florida we’ve got to put our parents and grandparents first,” DeSantis said at The Villages, the nation’s largest retirement community, just before Christmas.

Decisions on how soon to expand eligibility for the shots have not fallen neatly along partisan lines.

Gov. Larry Hogan of Maryland, a Republican, announced Tuesday that he would immediately switch to what he called the “Southwest Airlines model” for vaccine allocation, referring to the airline’s open seating policy. “We’re no longer going to be waiting for all the members of a particular priority group to be completed,” he said, “before we move on to begin the next group in line.”

Gov. Mike DeWine of Ohio, a Republican, urged patience in a news briefing Tuesday as he declined to estimate when the state would start vaccinating people beyond the first priority group, known as “1a.”

“We’re asking every health department, ‘Don’t go outside 1a; stay within your lane,’” he said, adding about the vaccines, “This is a scarce commodity.”

By Thursday DeWine had set a date for people 80 and older to start getting the vaccine — Jan. 19 — and said he would phase in everyone 65 and older, as well as teachers, by Feb. 8.

The reasons so many doses received by states have not yet been administered to the first priority group are manifold. The fact that vaccination began around Christmas, when many hospital employees were taking vacation, slowed things. More health care workers are refusing to get the vaccine than many of their employers expected, and some hospitals and clinics received more doses than they needed but felt constrained by state rules from giving them to people outside the first priority groups. Some initially worried they could not even offer leftover doses in open vials to people in lower priority groups and let them go to waste.

And federal funding for vaccination efforts has been slow to reach states and localities: They got only $350 million through the end of last year, a little more than $1 per resident of the country. The economic rescue package that Congress passed in December included $8 billion for vaccine distribution that state health officials had long sought, but the first tranche of it, about $3 billion, is only now starting to be sent out.

“There was great funding in the development of these products, great funding in the infrastructure to ship them and get them out,” said Dr. Steven Stack, commissioner of the Kentucky Department for Public Health. “But then there was no funding provided of meaning for administering the vaccine, which is the last mile of this journey.”

The CDC has recommended that a “1b” group consisting of people 75 and older and certain essential workers, including teachers, corrections officers and grocery store employees, be vaccinated next. The second group is much larger, about 50 million people. And the third recommended priority group — people 65 to 74, anyone 16 and older with high-risk medical conditions, and essential workers not already reached — numbers almost 130 million.

Pfizer and Moderna have pledged to deliver enough vaccine doses for 100 million people to each get the two necessary shots by the end of March, and many more in the second quarter. Several other vaccine candidates are far along in the pipeline and, if approved for emergency use here, could help ramp up distribution more quickly.

The CDC committee initially considered recommending that a wide range of essential workers get vaccinated before older Americans. Its rationale was that many essential workers are low-wage people of color, who have been hit disproportionately hard by the virus and had limited access to good health care. That sparked a backlash, and several governors, including DeSantis, quickly made clear they would cater to older people first.

Dr. Mark McClellan, who formerly headed the FDA and now runs Duke University’s health policy center, said that while pushing ahead to vaccinate older people and other particularly vulnerable groups would accelerate the overall effort, “we’re going to be missing a lot of higher-risk individuals along the way.”

“I do worry about that becoming uneven in terms of access,” he said during a press briefing, “with lower-income groups, minority groups maybe in a tougher position if we don’t make it very easy for people in these high-risk groups to get vaccinated.”

Dr. Marcus Plescia, chief medical officer for the Association of State and Territorial Health Officials, said he was surprised to hear federal officials like Azar and Dr. Jerome Adams, the surgeon general, advocate expanding vaccine access so broadly so soon.

“We didn’t come up with priority populations to slow things down but because we knew there would be limited numbers of doses,” Plescia said. “If we try to do this in an equitable, fair way, it’s not going to be as fast as if our only goal is to get vaccine into as many arms as possible.”

Whether or not they are widening access now, governors are ramping up pressure on hospitals to use their allocated doses more quickly. Cuomo threatened to fine those that did not use their initial allocations by the end of this past week and not send them any more.

Hogan warned hospitals this past week, “Either use the doses that have been allocated to you, or they will be directed to another facility or provider.”