Premier League: Costa returns, scores in 2-0 win over Hull; Arsene is sent off 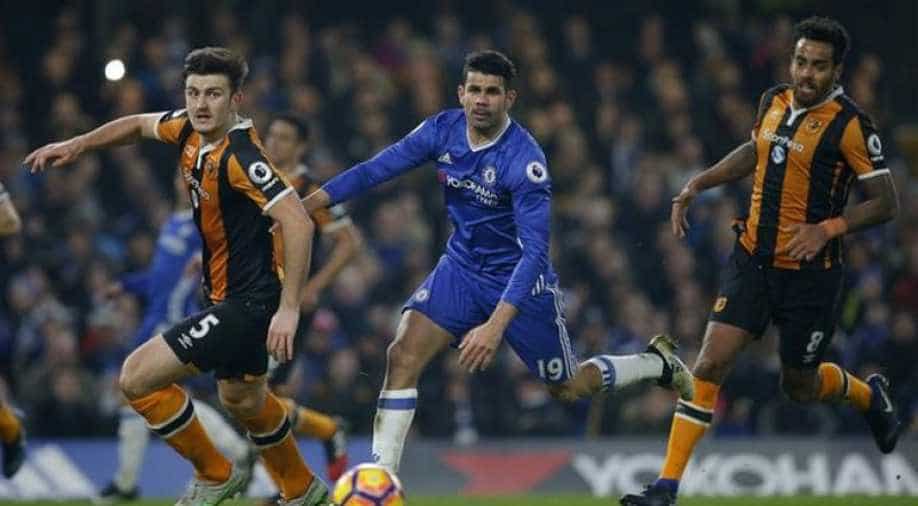 The real drama came in the Asenal game came in injury time when each side scored a penalty and Arsene Wenger clashed with the fourth official after being sent off for disputing the first spot-kick. In photo: Diego Costa. Photograph:( Reuters )

Diego Costa returned for Chelsea with deadly effect on Sunday, scoring in the 2-0 win over Hull City which increased their lead at the top of the Premier League to eight points after Arsenal had earlier taken up the mantle as their nearest pursuers.

The Gunners beat Burnley 2-1 at the Emirates where the real drama came in injury time when each side scored a penalty and Arsene Wenger clashed with the fourth official after being sent off for disputing the first spot-kick.

By contrast, the day's other game seemed routine, with Southampton beating the ailing champions Leicester City 3-0.

Chelsea are odds-on to succeed Claudio Ranieri's side as victors in May after posting their eighth successive home league win against a Hull side which had Ryan Mason taken to hospital after a sickening clash of heads with Gary Cahill.

The stage was set perfectly for the returning Costa to make more headlines after being said by the club to be missing with injury against Leicester last week while British media reported he was unsettled by the prospect of a big-money move to China.

Manager Antonio Conte said before the game that he had been happy with Costa's mentality and he will have been even more pleased with the goal that put the Blues ahead in first-half injury time after good work on the right by Victor Moses.

The strike sparked a bizarre celebration in which the Spanish international made gestures with both hands that suggested he had just silenced the chatter about his future in the best way possible.

Indeed he had. Costa's goals -- this was his 52nd on his 100th appearance for the club -- remain the main reason why Chelsea are such hot favourites for the title as they now stand on 55 points with Arsenal on 47, Tottenham Hotspur on 46 and Liverpool on 45.

Costa eventually left to a rousing reception late after Cahill settled matters by rising above the visiting defence to head home the second on 81 minutes.

"Now we have (a lead of) eight points and there are 16 games to play. I think me and my players have good experience to understand that in this league it will be very tough until the end," Conte told reporters.

Across London, the goals came even later at the Emirates where the final minutes left the crowd -- and managers -- breathless.

After the game's astonishing finale, which saw Alexis Sanchez net the winner in the 98th minute, a relieved Wenger apologised for his earlier clash with the fourth official.

However, Arsenal's manager may face an FA charge for appearing to push Anthony Taylor near the tunnel following his dismissal by referee Jon Moss after Burnley's 93rd-minute penalty had been converted by Andre Gray.

"I didn't see any penalty from outside but I should have shut up and I apologise, even if I was frustrated," said Wenger.

Gray's goal proved just the start of the action as referee Moss, who had already sent off Arsenal's Granit Xhaka for a wild 65th minute tackle, awarded the Gunners a penalty of their own when Ben Mee raised a leg to the advancing Laurent Koscielny.

Penalty-taker Sanchez possessed the only cool head in the ground, dinking the ball over the Burnley keeper to secure an astonishing win for Arsenal, who had taken the lead through Shkodran Mustafi's 59th-minute header.

At Southampton, Ranieri had no complaints with Leicester's defeat, even offering an apology for confusing his players with some of his recent tactical variations.

"I think (in) the last matches I changed (the team's) shape to try to help my players play better but maybe I made mistakes," he said.

Poor defending allowed first-half goals for James Ward-Prowse and Jay Rodriguez while Dusan Tadic's late penalty only confirmed that Leicester, in 15th place just five points above the drop zone, are in free fall and in serious trouble.