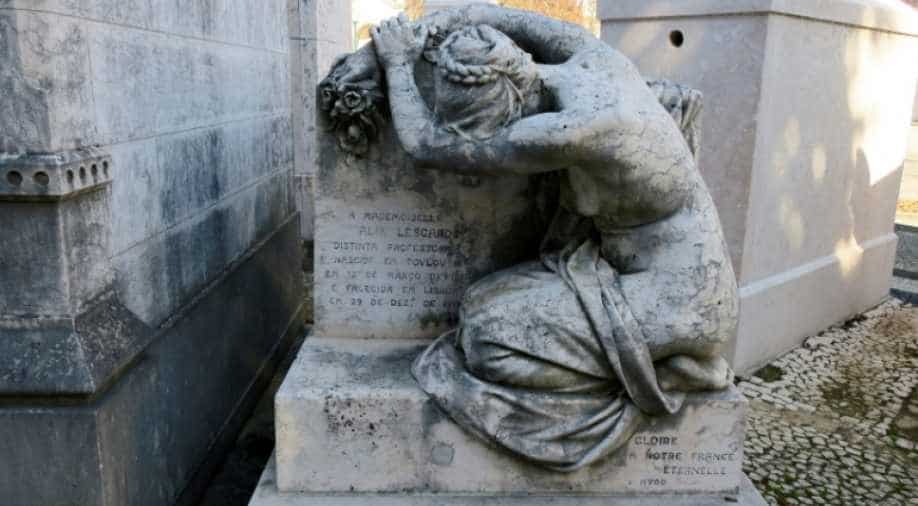 Love has a special place in a Lisbon cemetery that launched an original romantic tour on Tuesday prior to Valentine's Day.

Lisbon's Dos Prazeres Cemetery, the capital's largest, located in the western part of the city, is the final resting place of many great Portuguese artists, authors and historical figures and it has launched what it calls a "Till death do us part" Saint Valentine's Day tour.

"Here is where everything ends, but also where it all begins," history expert and official cemetery guide Licínio Fidalgo said as he readied to share his graveyard account of romance, tragedy and immortal love to smitten couples from around the world.

Dos Prazeres is well worth a stroll down its spotless avenues, flanked by cypresses and monumental funerary monuments, regardless of the fact that most of Licinio's romantic characters are not actually buried in the graveyard.

One of the first stops on the tour is a tomb covered with rocks and trees, crowned by a cross, that belongs to Elise Hensler, a Swiss-American who later became the second wife of King Ferdinand II of Portugal (1816-1885).

He was a German prince of the House of Saxe-Coburg and Gotha-Koháry who became widowed and was crowned king of Portugal after the death of his royal wife, Queen Maria II of Portugal (1819-1853).

Hensler was an opera singer and a single parent to her daughter Alice.

This romantic relationship was not well seen in Lisbon's royal court, so Ferdinand II had to wait for his son Pedro V's coming of age and rise to the throne, before marrying Hensler in 1869, who was then bestowed with the German title of Countess of Edla.

"They were twin souls. All the romanticism that pervades the Serra de Sintra hills is due to them," Licinio said.

After Fernando's death, Elise moved to Lisbon with her daughter "who thought she was her auntie," he adds.

"Only on her deathbed did she reveal she was Alice's mother," Licinio said.

They remained together till death, though Fernando was buried alongside his Portuguese royal first wife Queen Maria II in the royal pantheon of Alcobaça.

Another romantic story that became universal was that of Francisca, the "Fanny Owen" of Agostina Bessa-Luís' eponymous novel which was later adapted to the silver screen by Manoel de Oliveira.

Owen was the daughter of Colonel Hugh Owen, an English combatant during the Peninsular War, who settled in Portugal after marrying the daughter of a wealthy Port wine merchant and was educated at the Portuguese royal court of Carlota Joaquina.

One year later, she died of tuberculosis followed by her husband a few months later.

"He was very fond of opium," explains Licinio as he drops a bombshell. "A doctor said that Fanny died a virgin. What happened there? There are many versions," the cemetery guide added.

HIstory notes that the two friends were José Augusto de Magalhães, a poor and mediocre poet who was Owen's kidnapper, while the other Camilo Castelo Branco, who went on to become one of the greatest writers of the Portuguese language.

Licínio has his own theory that he cannot confirm: "It was a dramatic love till the end," he concluded.

Another drama-laden romance was María Severa Onofriana, a beautiful gypsy with a prodigious voice who was regarded as the first fado singer.

Onofriana fell in love with the 13th Count of Vimioso, an aristocratic, bohemian socialite who paraded her around Lisbon until she contracted tuberculosis and he abandoned her.

She died young, poor and alone.

Another illustrious Portuguese who does not share his final resting place with his impossible love is the writer, Fernando Pessoa, whose remains were removed from Dos Prazeres before they buried the love of his life, Ofelia Queiroz.

Licinio shrugs: "Separated both in life and in death," and, quoting Pessoa, he added: "Romantic love is a road to disillusionment."