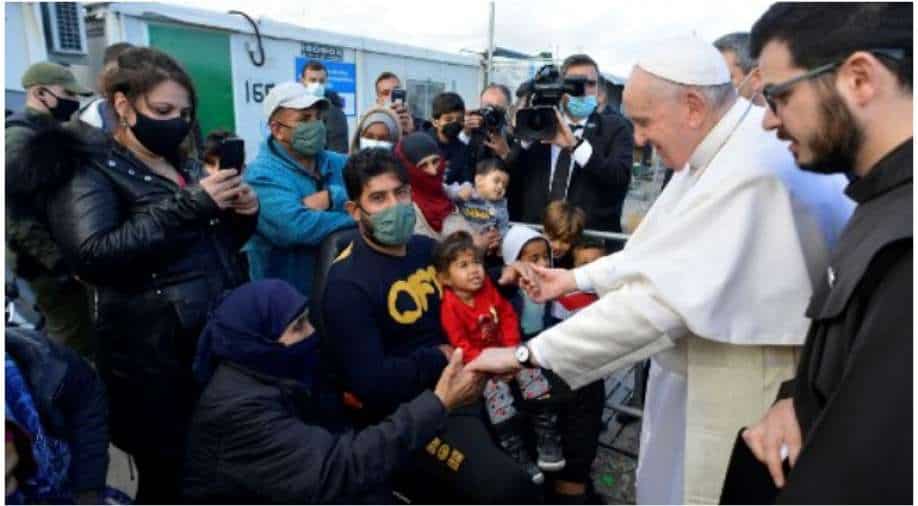 This handout photograph taken on December 5, 2021 and released by Vatican Media shows Pope Francis (2R) meeting refugees at the Reception and Identification Centre in Mytilene on the island of Lesbos. Photograph:( AFP )

This is Pope Francis' second visit to the Greek island of Lesbos. The island has become a symbol of plight of refugees

Pope Francis, during his visit to Greek island of Lesbos urged the world not to use issue or migrants urged for political gains. This was Pope's second visit to the Greek island that has become symbol of plight of refugees.

Pope's first visit in Lesbos was 2016. At that time, he had taken 12 Syrian refugees with him back to Italy.

In his latest visit to Lesbos, Pope met refugees at Mavrovoni camp. The camp holds 2300 people.

He lamented that "little has changed with regard to the issue of migration" since his last visit five years ago.

The Mediterranean, where thousands have died trying to make the crossing from north Africa to Europe, was still "a grim cemetery without tombstones".

"I am here to see your faces and look into your eyes. Eyes full of fear and expectancy, eyes that have seen violence and poverty, eyes streaked by too many tears," he said at the camp's reception and identification area.

Francis for the second straight day chided those who use the migration crisis for political ends.

"It is easy to stir up public opinion by instilling fear of others," he said, adding that people who are anti-immigrant "fail to speak with equal vehemence" about the exploitation of the poor, wars, and the arms industry.

"The remote causes should be attacked, not the poor people who pay the consequences and are even used for political propaganda," he said.

The camp, set up in a old army firing range, is made up of dozens of prefabricated structures, some similar to shipping containers and other, smaller ones made of plastic.