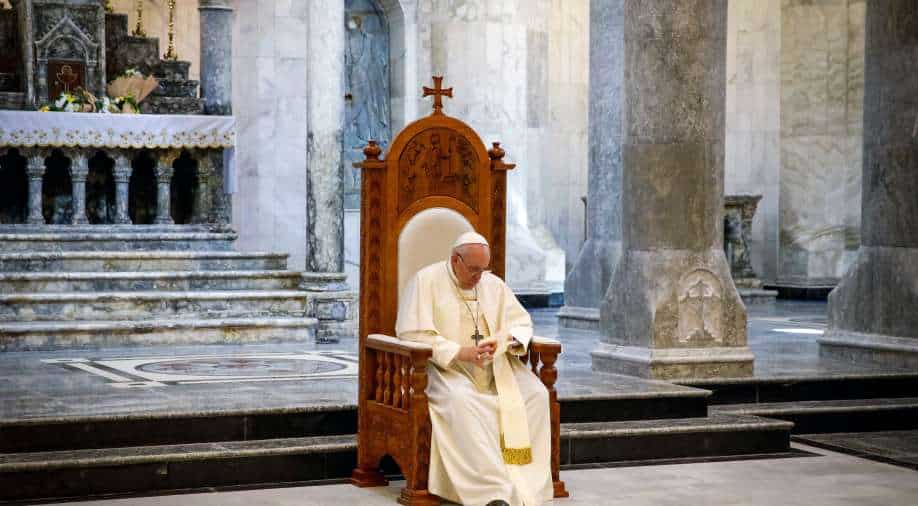 This will be the 35th abroad trip for Francis Photograph:( The New York Times )

The trip is the third this year for the pope, who is believed to have received a booster shot, though that has not been confirmed. He made a historic pilgrimage to Iraq in March and a politically symbolic trip to Hungary and Slovakia in September during which he appeared to speak out against nationalism

Pope Francis arrived in Cyprus on Thursday, beginning a five-day trip that would also bring him to Greece and its island of Lesbos, where in 2016 he made a defining visit to refugees living in horrid conditions and brought some back to Rome on his plane.

The trip, the 35th abroad for Francis, who turns 85 later this month, reflects his determination to maintain a global focus on the plight of migrants and lands torn by strife, despite the world’s preoccupation this week with the omicron variant of the coronavirus.

His journey will include other hallmarks of the Francis papacy, including encouraging tiny Catholic minorities and reaching out to other religious leaders, this time in the Greek Orthodox Church. He is expected to help relocate to Italy some migrants in Cyprus — and possibly Lesbos again — this time.

“Europe cannot ignore the Mediterranean Sea that hosted the spread of the Gospel and the development of great civilizations,” Francis said in a video message before the trip. He lamented the sea becoming a “great cemetery” and said that in the age of the pandemic and climate change, it was imperative to “sail together, and not to split up by going our separate ways.”

The trip is the third this year for the pope, who is believed to have received a booster shot, though that has not been confirmed. He made a historic pilgrimage to Iraq in March and a politically symbolic trip to Hungary and Slovakia in September during which he appeared to speak out against nationalism.

This trip, which refocuses attention on the priorities of his pontificate, including opening borders and welcoming the destitute, comes as migrants are again facing awful conditions and tragic deaths, including at the Belarus-Poland border and in the English Channel, where at least 27 people died last week. But it also comes at an unpredictable and deeply concerning phase of the pandemic as countries around the world shut their borders to try to protect their populations from a variant whose effects are still very much unknown.

“The recommendation in general is prudence,” Matteo Bruni, the Vatican spokesperson, said when asked about coronavirus precautions and worries that the new variant would eclipse the main themes of the trip.

Francis is the second pope, after his predecessor, Pope Benedict XVI, to visit Cyprus, and Thursday he will meet with local Catholic priests and the president and diplomats in Nicosia, the capital. On Friday, he will visit with the Orthodox archbishop and celebrate a holy Mass at an outdoor stadium.

He will end the day with a prayer at a parish church with migrants, and the Vatican has arranged to have about 50 migrants relocated to Italy.

Francis will stay at a Franciscan monastery in Nicosia — the divided capital of Cyprus. The medieval city is separated by a U.N.-protected buffer zone.

He will then spend Saturday reaching out to Orthodox leaders and meeting with officials before travelling on Sunday to Lesbos, which Bruni said had “become a symbolic place.”

Bruni said that the Cyprus visit would allow Francis to underline key themes of his pontificate, as it had over the centuries been “Europe’s outermost border to the Middle East, a laboratory of coexistence and a land of encounter with orthodoxy.”

Still, Cyprus is far from a tranquil place.

With Turkey to the north, Syria to the East, Israel to the South and Greece to the West, Cyprus is a small, stingray-shaped island between worlds and a crossroads for cultures and migrations.

The country has effectively been partitioned since 1974, with its Greek and Turkish communities — and its capital, Nicosia — separated by a buffer zone known as the Green Line.

The internationally recognized government of the Republic of Cyprus controls only the southern two-thirds of it, and the remaining third is the Turkish Republic of Northern Cyprus, recognized only by Turkey.

Cyprus joined the European Union in 2004, but the island is still divided along ethnic lines. Unification efforts start and stop periodically, most recently in 2017, but the talks broke down over Turkey’s refusal to remove its troops. They led to Turkey’s president, Recep Tayyip Erdogan, declaring, “Turkey will be in Cyprus forever,” and rejecting a unified federation.

A recent uptick in migrant arrivals has intensified hard-right, nationalist sentiment and the resistance of the Republic of Cyprus government, which has appealed to the European Union for permission to stop processing asylum requests. But the spike in numbers, and suspicions that Turkey is funnelling the migrants to the border, have deepened the animosity between the north and the south.

Nearly 80% of the island’s population is Orthodox Christian, and about 20% is Sunni Muslim. There is only a tiny population of Catholics, about 38,000, who mostly fall under the jurisdiction of the Latin Patriarch of Jerusalem and who trace their roots to the Crusades. That is less than the estimated number of Turkish troops based in the north.

Rev. Georgios Armand Houry, a Cypriot priest, said that many Catholics were hoping that the pope would help members of the faith “return home” to uninhabited towns after displacement earlier during the conflict.

During Benedict’s 2010 trip, Archbishop Chrysostomos II, the leader of the Orthodox Church of Cyprus, accused Turkey of an “obscure plan” to take over the entire island and called for the pope’s “active cooperation” in resolving the long-standing dispute.

The north continues to use the Turkish lira and has an economy closely tied to the Turkish mainland.

In recent years, tensions have risen after the discovery of rich natural gas deposits under the eastern Mediterranean. Greece, with its islands scattered in the area, claims that it has sole drilling rights. The potential for enormous wealth from the deposits has created a profit-sharing unity among surrounding nations, including Greece, Israel, Israel, Egypt, Italy and Jordan.

But Turkey has used northern Cyprus as its toehold, sending drilling ships, accompanied by warships, to explore for gas off Cyprus; that, in turn, has prompted retribution by the European Union against Turkish companies. The prospect of a clash between Greece and Turkey, two NATO allies with centuries of bad blood, has proved worrying.

“It’s a wound that has been open for some time,” Bruni said. “The Holy See undoubtedly supports every effort to strengthen bilateral talks, which are the only solution for the island and its people.” He suggested Francis would indirectly take those issues on, saying that he would touch on environmental themes by speaking of the horrible fires that burned Greece’s forests this summer but also “the exploitation of the seabed.”

Cyprus is an ancient Christian land. Tradition holds that St. Paul arrived here around A.D. 46 to preach the Gospel with Barnabas, a Cypriot and a saint.

Francis, in his video message, said he would come “in the footsteps of the first great missionaries,” and for the chance “to drink from the ancient wellsprings of Europe: Cyprus, the outpost of the Holy Land on the continent; Greece, the home of classical culture.”