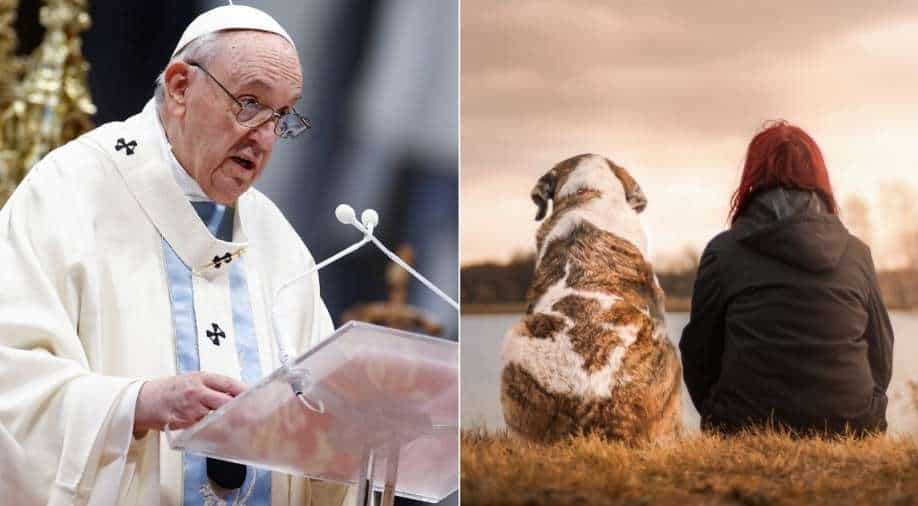 Pope said said that 'denial of fatherhood and motherhood and diminishes us, takes away our humanity'

While speaking on parenthood during a general audience at the Vatican on Wednesday, Pope Francis said that people who prefer pets are selfish, adding that substituting pets for children "takes away our humanity".

Italy's International Organization for the Protection of Animals (OIPA) called the remark "strange" as Pope said that pets "sometimes take the place of children" in society.

During the audience, the head of the world's 1.3 billion Catholics said, "Today... we see a form of selfishness. We see that some people do not want to have a child. Sometimes they have one, and that's it, but they have dogs and cats that take the place of children. This may make people laugh but it is a reality."

Saint Joseph, you who loved Jesus with fatherly love, be close to the many children who have no family and who long for a daddy and mommy. Support the couples who are unable to have children, help them to discover, through this suffering, a greater plan. #GeneralAudience

While reacting to Pope's remark, OIPA said it was "strange to think that the pope considers the love in our lives limited quantitatively". The Italy-based animal rights group also cited the sacrifices of volunteers who save the lives of animals.

Pope Francis is not known to have a pet at his Vatican residence but important to note that his predecessor Benedict XVI was a cat lover.

However, there have been instances when Francis was spotted petting dogs, he also allowed a baby lamb to be draped over his shoulders during Epiphany in 2014. He had even petted a tiger and a baby panther.

Social media users have reacted sharply to the remark made by Pope, either slamming the comments or using memes to express their opinions.

I gotta say, if I were the pope, I would simply not have opinions about other people's children. https://t.co/1fPVhBoF2t

Damn dude. Pope just told us we're selfish for having dogs instead of children. Huge L for us. Please respect our privacy as we take a year off trying to shake this burn, as the church is always right and has never had a bad take

I think its selfish for older generations to pressure younger people into having children when they have created a social and political landscape that makes it almost impossible. If you want us to have children, help us afford it, tackle inequality, and look after the planet

Drop my kids off with the pope for the weekend then see what he has to say come Monday.

Cat twitter getting mentally prepared to drag Pope Francis for saying people who choose pets over having kids are selfish. pic.twitter.com/AyqAlxpggp