Pope Francis arrives in Baghdad on historic visit to Iraq 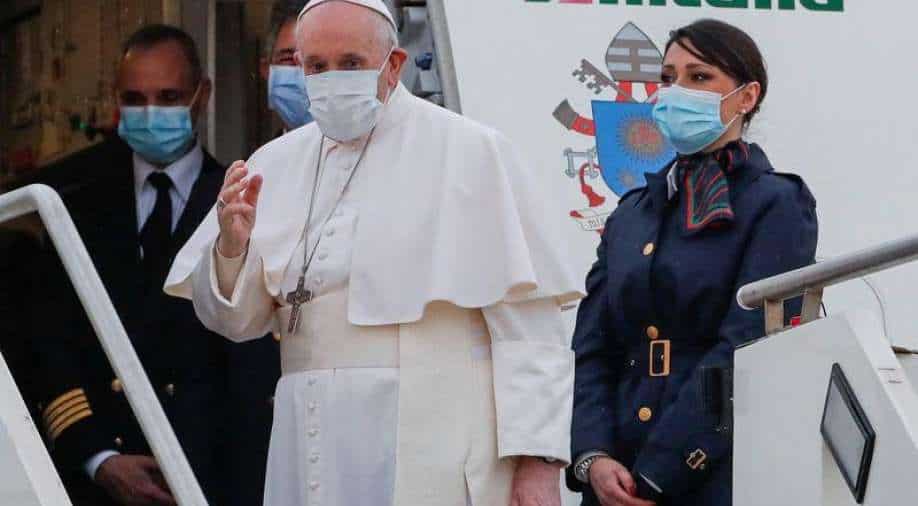 Iraq has deployed thousands of additional security personnel to protect the 84-year-old pope during the visit, which comes after a spate of rocket and suicide bomb attacks raised fears for his safety. The Iraq trip is his first outside Italy since November 2019.

Pope Francis arrived in Iraq on Friday for his riskiest foreign trip since becoming the head of the Catholic Church, having said that he felt duty-bound to make the visit because the country had suffered so much for so long.

The pope, who wore a facemask during the flight, kept it on as he descended the stairs to the tarmac of  Baghdad's international airport and was greeted by two masked children in traditional dress.

The  84-year-old pontiff was visibly limping in a sign that his sciatica, which has flared and forced him to cancel events recently, was possibly bothering him. The Alitalia plane carried him, his entourage, a security detail, and about 75 journalists.

A red carpet was rolled out on the tarmac in Baghdad's international airport with Prime Minister Mustafa al-Kadhimi on hand to greet him.

Iraq has deployed thousands of additional security personnel to protect the pope during the visit, which comes after a spate of rocket and suicide bomb attacks raised fears for his safety. The Iraq trip is his first outside Italy since November 2019.

"This is an emblematic trip and it is a duty towards a land that has been martyred for so many years," Pope Francis had said.

Francis's whirlwind tour will take him by plane, helicopter and possibly armoured car to four cities. He will say Mass at a Baghdad church, meet Iraq's top Shi'ite Muslim cleric in the southern city of Najaf and travel north to Mosul, where the army had to empty the streets for security reasons last year for a visit by Iraq's prime minister.

Mosul is a former Islamic State stronghold, and churches and other buildings there still bear the scars of conflict.

Since the defeat of the Islamic State militants in 2017, Iraq has seen a greater degree of security, though violence persists, often in the form of rocket attacks by Iran-aligned militias on US targets, and American military action in response.

On Wednesday 10, rockets landed on an airbase that hosts US, coalition and Iraqi forces. Hours later, Francis reaffirmed he would travel to Iraq.

The pontiff will also visit Ur, birthplace of the prophet Abraham, who is revered by Christians, Muslims and Jews, and meet Iraq's revered top Shi'ite Muslim cleric, 90-year-old Grand Ayatollah Ali al-Sistani.

The meeting with Sistani, who wields great influence over Iraq's Shi'ite majority and in the country's politics, will be the first by a pope.