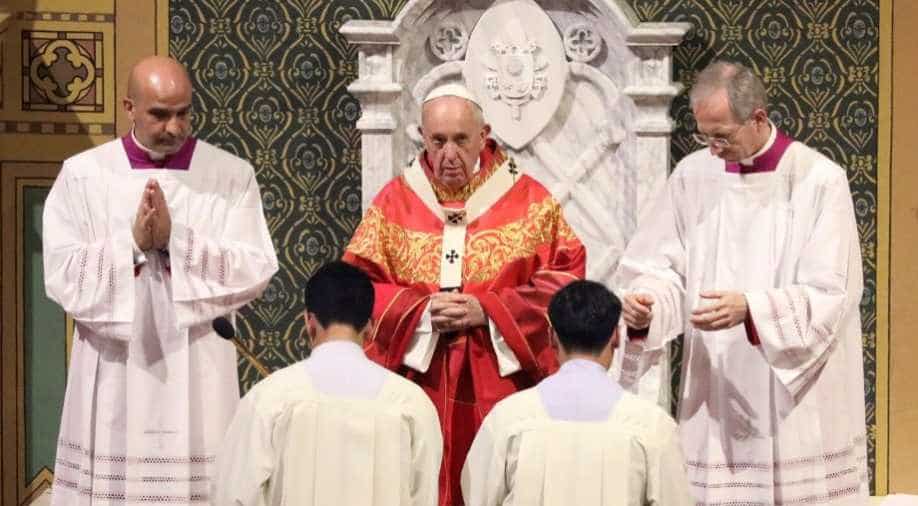 The pope, 82, was accompanied to the airport by his cousin, Sister Ana Rosa Sivori, a nun who has worked in Thai schools for more than 50 years and was his translator on the trip.

Pope Francis left Thailand on Saturday after a three-day visit and headed to Japan, where he is to visit the ground zeros of Hiroshima and Nagasaki as part of his campaign against nuclear weapons.

The pope, 82, was accompanied to the airport by his cousin, Sister Ana Rosa Sivori, a nun who has worked in Thai schools for more than 50 years and was his translator on the trip.

In Thailand, he celebrated Mass with the small Catholic minority in an overwhelmingly Buddhist country and spoke out against human trafficking and sexual exploitation of women.

In Japan, Pope Francis is expected to turn his focus to his anti-nuclear campaign, particularly on Sunday, when he visits Hiroshima and Nagasaki, the world's only two cities to suffer nuclear attacks.

About 400,000 people were killed, either instantly or from radiation illness or injuries resulting from the atomic bombs that the United States dropped on Hiroshima on August 6, 1945 and on Nagasaki three days later, as it sought to end World War Two.

Francis will meet blast survivors, pray, and read a message on nuclear weapons at the bomb epicentre in Nagasaki. He later visits Peace Memorial Park in Hiroshima.

In the Japanese capital, he will meet survivors of the 2011 Fukushima nuclear disaster.

Francis wants a total ban on nuclear weapons, going further than his predecessors, when he said in 2017 that countries should not stockpile them, even for the purpose of deterrence.

Japan stresses its unique status as the only nation to have suffered atomic attacks and advocates disarmament but nonetheless relies on the US nuclear umbrella as an extended deterrent.

Francis, who, as a young priest, wanted to be a missionary in Japan, will also meet some of a dwindling number of its "Hidden Christians", descendants of those who preserved their faith in secret during centuries of persecution until a ban on Christianity was lifted in 1873.

Japan is mainly Buddhist and Shinto and only about 1% of its population of about 126 million identify as Christian. Of this number, some 536,000 are Catholic.

Christians are disproportionately present among Japan’s elite, some of whom may have also attended Christian private schools without adopting the religion.

Two Japanese prime ministers have been Catholics: Takashi Hara, from 1918 to 1921, and current finance minister Taro Aso, who was prime minister during 2008-2009.