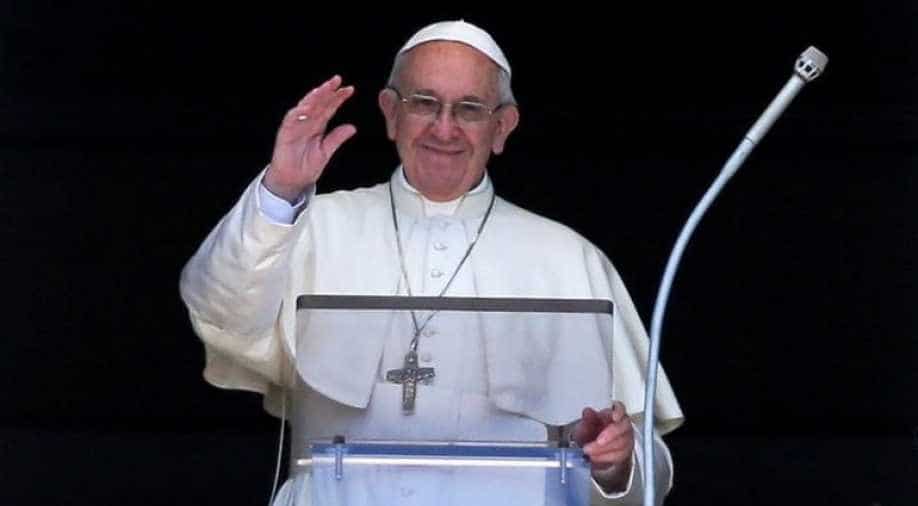 The 18-minute video was filmed in Vatican City and broadcast to the audience at the annual TED 2017 conference in Vancouver. Photograph:( Reuters )

The global spotlight has recently been on the world's largest rainforest, which is vital for the planet.

Pope Francis opened a synod Sunday to champion the Amazon's poverty-stricken and isolated indigenous communities by condemning the destructive "interests" he blamed for the fires that devastated the region.

"The fire set by interests that destroy, like the fire that recently devastated Amazonia, is not the fire of the Gospel," he said before the bishops from the nine countries of the pan-Amazonian region and representatives of indigenous peoples.

"The fire of God is the warmth that attracts and gathers into unity. It is fed by sharing, not by profits... The fire that destroys, on the other hand, blazes up when people want to promote only their own ideas, form their own group, wipe out differences in the attempt to make everyone and everything uniform", he added.

The working document for the synod denounced in scathing terms social injustices and crimes, including murders, and suggested a Church action plan.

"Listen to the cry of 'Mother Earth', assaulted and seriously wounded by the economic model of predatory and ecocidal development... which kills and plunders, destroys and devastates, expels and discards," the 80-page document said.

The run-up to the three-week synod, or assembly, saw some 260 events held in the Amazon region involving 80,000 people, in a bid to give the local populations a voice in the document.

Among those attending the synod as an observer was Sister Laura Vincuna, a missionary trying to protect the territories of the Caripuna indigenous people in the Brazilian Amazon.

"Help us defend our motherland, we have no other home!" she said on Saturday.

"Earth, water, forest: without these three elements nobody can do anything," she said on the eve of the synod.

Sunday's gathering comes as Brazilian President Jair Bolsonaro, a climate-change sceptic, told the United Nations that the world's media were lying about the Amazon, and attacked indigenous leaders as tools of foreign governments.

In his 2015 encyclical on ecology and climate change "Laudato Si", Francis denounced the destruction of the Amazonian rainforest in the name of "enormous international economic interests".

That trip was the first step towards the synod which opened Sunday.

"So many of our brothers and sisters in Amazonia are bearing heavy crosses and awaiting the liberating consolation of the Gospel, the Church's caress of love," the pope said in his homily. "For them, and with them, let us journey together."

He also warned against "the greed of new forms of colonialism".

The issue deeply upsets some traditionalists, who argue that making an exception for the Amazon would open the door to the end of celibacy for priests, which is not a Church law and only dates back to the 11th century.

The German Catholic Church in particular, which has an influential progressive wing, has been hotly debating the subject.

The synod, which runs until October 27, will also reflect on making official roles for women, who already play a central part in the Amazonian Church.

Of the 184 prelates at the synod, 113 hail from the Amazonian region, including 57 from Brazil.

Others taking part include 17 representatives of Amazonian indigenous peoples and ethnic groups, and 35 women - who will not have the right to vote on the final document.