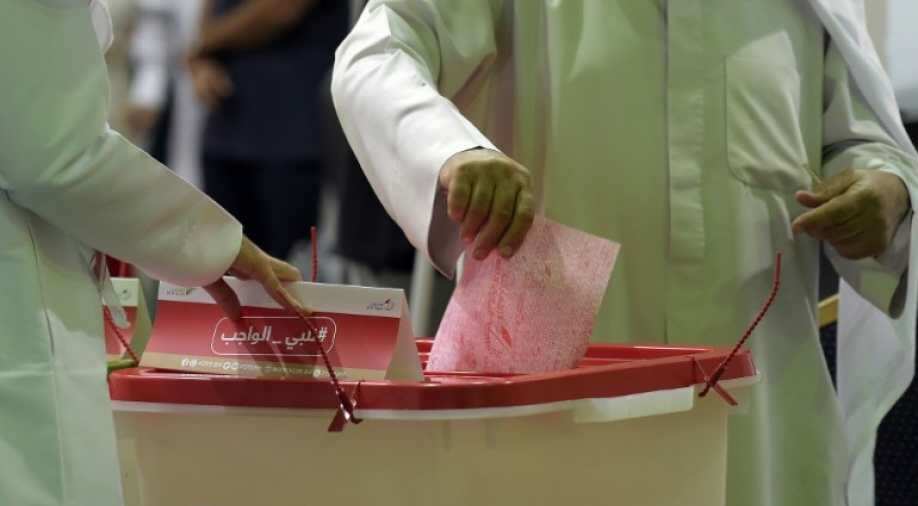 Bahraini voters cast their ballot for parliamentary election at a polling station in the Bahraini city of Al-Muharraq. Photograph:( AFP )

Counting got underway after a day of voting in the tiny Gulf kingdom, with preliminary results expected Sunday.

Counting got underway after a day of voting in the tiny Gulf kingdom, with preliminary results expected Sunday.

King Hamad in September urged voters to take part in the vote, in which officials say 293 people -- including 41 women -- are running for parliament.

A municipal poll coincides with the parliamentary vote.

Justice Minister Sheikh Khalid bin Ali al-Khalifa announced a preliminary voter turnout of 67 per cent, saying it was "well above" the 53 per cent turnout registered during the last elections in 2014.

But Al-Wefaq poured scorn on those figures, saying in a tweet that there was a "wide boycott" and accusing authorities of "forcing" people to vote.

Bahrain has been hit by ongoing unrest since 2011, when security forces crushed Shiite-led protests demanding a constitutional monarchy and an elected prime minister.

Opposition parties shunned the last elections in 2014, the first since the 2011 crackdown, denouncing the vote as a "farce".

More than 350,000 Bahrainis were eligible to vote, the justice minister said, adding that there were 54 polling stations across the country.

On Saturday, the interior ministry alleged Iran was meddling in the ballot after people reportedly received text messages warning them not to go vote as they had been stricken from the electoral roll.

The ministry said Tehran was behind around 40,000 texts sent to Bahraini citizens that "aimed to negatively affect" the elections, adding that other messages came from people inside the kingdom.

At least six people were detained and charged this month for "obstructing the electoral process", according to Bahrain's public prosecutor.

One of the six was Ali Rashed al-Asheeri, a former member of parliament with Al-Wefaq, according to the London-based Bahrain Institute for Rights and Democracy.

Asheeri had tweeted that he and his family would boycott the polls.

Al-Wefaq called for a boycott of this year's parliamentary election after a law issued in June barred "leaders and members of political associations dissolved for violating the kingdom's constitution or its laws" from fielding candidates.

Experts have questioned the value of a parliamentary election in which the opposition is not allowed to participate.

Neil Partrick, a specialist in Gulf Arab politics, said Bahrain's elections "have lost all practical and political meaning" since an earlier boycott by Al-Wefaq -- the main movement representing the country's Shiite population.

"The subsequent outlawing of Al-Wefaq, and of the relatively liberal, cross-sect, Waad trend, has merely underlined the meaninglessness of Bahraini elections," he said.

He said such polls had "no political or practical substance" regardless of boycott calls.

But the United Arab Emirates state minister for foreign affairs Anwar Gargash disagreed, tweeting that the election in Bahrain had been a "success".

"Bahrain's success is our success," he said.

Since 2011, authorities have imprisoned hundreds of dissidents -- including top Shiite opposition leader Sheikh Ali Salman, who headed Al-Wefaq -- and stripped many of their nationality.

"Over the past two years, the crackdown in Bahrain has seen the political opposition detained, intimidated and silenced," said Devin Kenney, the rights group's Bahrain researcher.

"We call on the authorities to stop this ongoing and escalating repression and to allow free expression of dissenting voices, including those who oppose the monarchy."

Human rights groups have frequently said cases against activists in Bahrain -- men and women, religious and secular -- fail to meet the basic standards of fair trials.