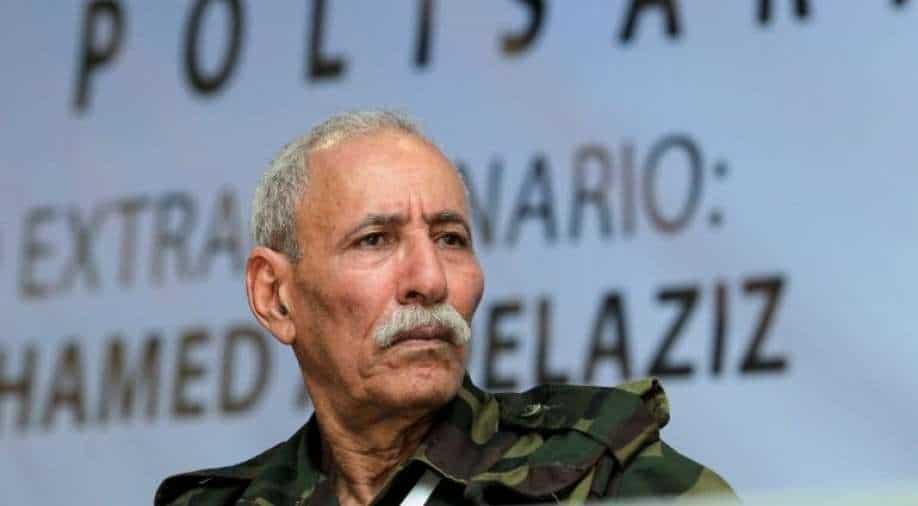 Brahim Ghali, new secretary general of Polisario Front and president of the Sahrawi Arab Democratic Republic (SADR), reacts during an extraordinary congress at the Sahrawi refugee camp of Dakhla, southeast of the Algerian city of Tindouf Photograph:(Reuters)
Follow Us

The leader of the Western Sahara independence movement at the heart of a diplomatic spat between Spain and Morocco will appear before an investigating judge in Spain on June 1, representatives of the Polisario Front in Spain said Wednesday.

Brahim Ghali heads the Polisario Front and the self-declared Sahrawi Democratic Arab Republic based on refugee camps in western Algeria.

He has been recovering from COVID-19 in a Spanish hospital, where he checked in with a false identity after arriving in the country with a diplomatic Algerian passport.

His presence has irked Rabat, which annexed Western Sahara in the 1970s, and has been tied to the sudden arrival of more than 8,000 migrants many of them unaccompanied children to a Spanish enclave in northern Africa that shares a border with Morocco.

The Moroccan government has said that it won't reinstate its ambassador to Madrid if Ghali leaves Spain with the same secrecy used for his arrival in mid-April and without answering for genocide allegations and other possible crimes that anti-Polisario groups accuse him of.

Ghali had initially declined to sign a summons from Spain's High Court for a preliminary hearing in a war crimes case against him.

The leader was admitted into a hospital in Spain for treatment last month, angering Morocco, which regards Western Sahara as part of Morocco and says Ghali is using travel documents provided by Algeria and a false name.

Spain's foreign minister, Arancha Gonzalez Laya, said on Sunday that when Ghali has recovered from health problems, he should answer the case before he returns to his own country.

Rabat blamed the crossings on the weather and tired border guards though analysts said it appeared to be linked to the diplomatic dispute with Madrid.

How the rich hold British property through offshore companies? This report explains