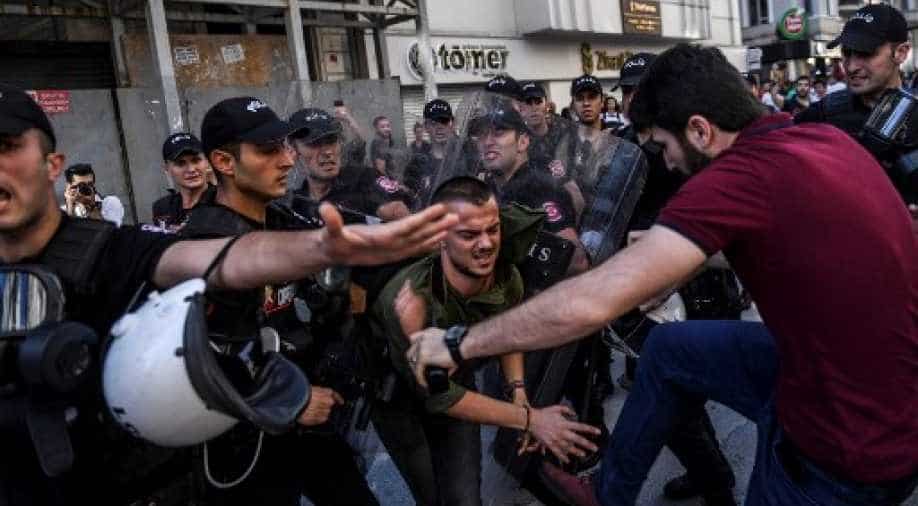 A plain-clothes police officer kicks a member of a group of LGBT rights activist as Turkish police prevent them from going ahead with a Gay Pride annual parade. Photograph:(AFP)
Follow Us

Thousands of people rallied close to the popular Istiklal Avenue and Taksim Square where organizers originally planned to hold the parade.

Turkish police on Sunday fired tear gas at gay rights groups and activists who defied authorities to march for the Istanbul pride parade, banned for the fifth year in a row.

Thousands of people rallied close to the popular Istiklal Avenue and Taksim Square where organizers originally planned to hold the parade, an AFP correspondent said.

The parade was banned by the Istanbul governor's office but the police allowed people to gather in a side street nearby where a public statement was made by the organizers, Istanbul LGBT+ Pride Week.

Riot police then fired tear gas to disperse the crowd, the correspondent said.

There was a heavy police presence near Taksim Square, including police water cannon vehicles. Other streets were closed off by officers.

There were chants of "shoulder to shoulder against fascism" and "we will not be quiet" among the crowd filled with rainbow flags and umbrellas.

Amnesty International on Friday dismissed authorities' claims of security or public order concerns after the ban was issued.

"It is... a naked attempt to erase the public collective presence of a group which, in the words of the governorate, is deemed to be 'societally objectionable'," the human rights group said in a statement.

Amnesty said the governors of the Aegean region of Izmir and the southern province of Antalya also banned all pride events earlier this month.

Istanbul pride had taken place every year since 2003.

The last parade which took place without a ban in 2014 drew tens of thousands of participants in one of the biggest LGBTI events in the majority Muslim region.

Although homosexuality has been legal throughout the modern Turkish republic, LGBTI individuals point to regular harassment and abuse.

But many opposition-run district municipalities including Kadikoy in Istanbul and Datca in southwestern Turkey tweeted on Saturday in support of LGBTI rights.