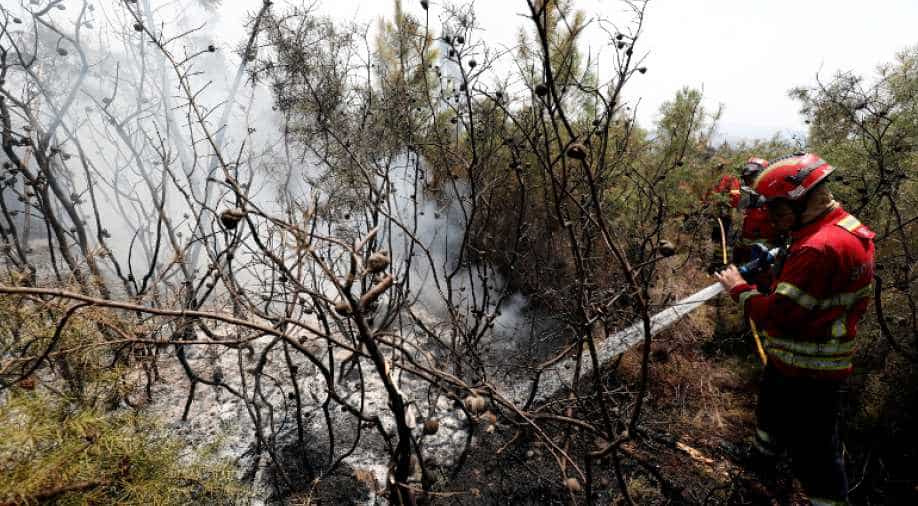 Firefighters help to put out a forest fire next to the village of Vila de Rei, Portugal July 21, 2019. Photograph:( Reuters )

More than 800 firefighters battled a wildfire sweeping across central Portugal on Sunday, after bringing under control two other blazes which left 20 people injured and prompted authorities to partially evacuate a village

More than 800 firefighters battled a wildfire sweeping across central Portugal on Sunday, after bringing under control two other blazes which left 20 people injured and prompted authorities to partially evacuate a village.

In a statement released on Sunday afternoon, police said a 55-year-old man was detained on suspicion of starting a blaze in the Portuguese district of Castelo Branco, where the wildfires started on Saturday before spreading to nearby Santarem.

"The suspect`s actions put people`s lives, houses and the forest at risk," the police said, without explicitly saying the detained man was responsible for the ongoing wildfire.

Internal administration minister Eduardo Cabrita said police had opened an investigation into the fires, adding that local authorities considered it unusual that all the blazes had started in a narrow time frame between 1430 and 1530 local time (1330-1430 GMT) on Saturday in the same area.

Strong winds and high temperatures were making it harder for firefighters to put out the remaining wildfire, although they have been able to control 85% of the flames in Vila de Rei, a municipality in Castelo Branco, 225 kilometres (139 miles) northeast of the capital Lisbon.

"(It will be) an afternoon of intense work," Belo Costa, a Civil Protection official, told reporters.

Thirteen airplanes and 243 firefighting vehicles on the ground are battling the blazes, along with 20 soldiers and four bulldozers.

Twelve civilians and eight firefighters were injured in Saturday`s fires, Cabrita said. One is in a serious condition and remains hospitalised with first and second-degree burns.

Castelo Branco remains under a yellow risk alert with temperatures expected to reach 31 degrees Celsius on Sunday, according to the national meteorological agency.

Ricardo Aires, the mayor of Vila de Rei, one of the affected municipalities, told Portugal`s public broadcaster RTP that there weren`t enough firefighters or resources.

Portuguese president, Marcelo Rebelo de Sousa, said in a statement that he was following the situation closely and sent solidarity to those affected.

In June 2017, a devastating wildfire in the central town of Pedrogao Grande killed 64 people and injured more than 250. The fire was the worst disaster in modern Portuguese history.