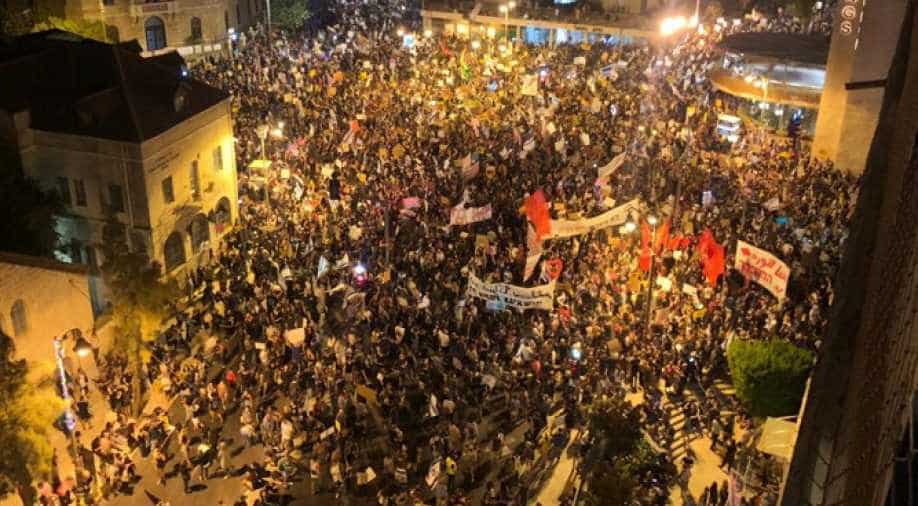 Right-wing extremist Yona Avrushmi served 27 years in prison for hurling the hand grenade that killed activist and teacher Emil Grunzweig and wounded nine others during a Jerusalem protest against Israel's war in Lebanon.

Israeli police were deployed to protect protesters demonstrating against Prime Minister Benjamin Netanyahu Saturday after the convicted killer of a 1983 peace marcher called present-day demonstrators "germs" and hinted they could meet violent opposition.

Right-wing extremist Yona Avrushmi served 27 years in prison for hurling the hand grenade that killed activist and teacher Emil Grunzweig and wounded nine others during a Jerusalem protest against Israel's war in Lebanon.

On Friday night, he told private Israeli Channel 12 TV that he would not be going to Saturday's rally but there would be others who shared his love for Netanyahu and hatred of his opponents.

"There are young guys who can go there, they know what to do," he said.

Protest organisers took the comments seriously and said they had filed a police complaint against Avrushmi for incitement to violence.

"I still hate them today and they hate me," he said. "They're bad people."

Shlomi Bachar, head of operations for Jerusalem police, said he had deployed uniformed and plainclothes officers along with "technological means" to secure Saturday's demonstration near Netanyahu's official residence in the city.

"Our main aim is to ensure the safe arrival and departure of the protesters," he told state-owned KAN 11 TV.

"We shall show zero tolerance for violence."

Speaking from the protest site Saturday evening as participants were still arriving, he estimated the crowd at "a few thousand" people.

In previous weeks, protester numbers have climbed sharply as the evening progressed.

Demonstrators in the upscale seaside community of Caesarea, where Netanyahu has a private home, reported a heavy police presence there too.

Protests demanding that Netanyahu resign over several corruption indictments and his handling of the novel coronavirus crisis have been mounting in recent weeks and the premier has been scathing in his counter-attack.

Last week, he accused Channel 12 and another private station, Channel 13, of "delivering propaganda for the anarchist left-wing demonstrations" by giving extensive coverage of the rallies.

On Sunday, a Jerusalem court slapped an order on his son Yair, restraining him from harassing individual protest leaders, after he tweeted their private addresses.

Israel won praise for its initial response to the COVID-19 outbreak, but the government has come under criticism amid a resurgence in cases after restrictions were lifted starting in late April. Netanyahu has himself acknowledged that the economy was re-opened too quickly.

The country of some nine million people has so far recorded over 82,000 confirmed cases, including nearly 600 deaths.