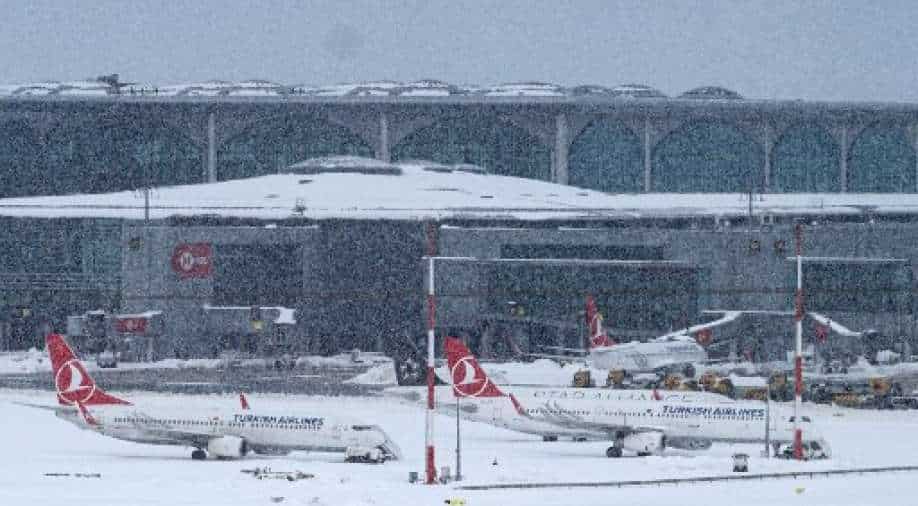 Aircrafts parked on the tarmac at Istanbul airport amid heavy snowfall Photograph:( AFP )

Reports said the airport had to be closed as the roof of one of the cargo terminals collapsed due to the snow discomforting passengers.

Istanbul airport was hit with heavy snow as tourists staged a protest to demand hotel accommodation.

The authorities called in riot police as passengers protested. There were several flight cancellations amid the snowstorm even as some flights opened on Monday afternoon.

Reports said the airport had to be closed as the roof of one of the cargo terminals collapsed due to the snow discomforting passengers.

Several roads were blocked as buses and cars struggled in the icy roads as heavy snow was reported in Istanbul. Reports said shopping malls and eateries closed early as people struggled amid the snow surge.

People posted pictures on social media as the city was blanketed under heavy snow.

G☃️☃️D morning #NFTCommmunity
☕️
Nowadays İstanbul is under the snow. Here are some photos how İstanbul looks like under the snow ☃️#nftphotography pic.twitter.com/TMXYG7iQha

There is a snowstorm in İstanbul and thousands of people (if not more) are stuck in snow blocked roads, including some of my friends. Please pray for them to return their homes and families safely 💜 pic.twitter.com/AxRn650pQF

The snowfall had begun last week but picked up as days passed in Istanbul discomforting 16 million residents. There were also reports of snowstorms sweeping through Greece and Syria.