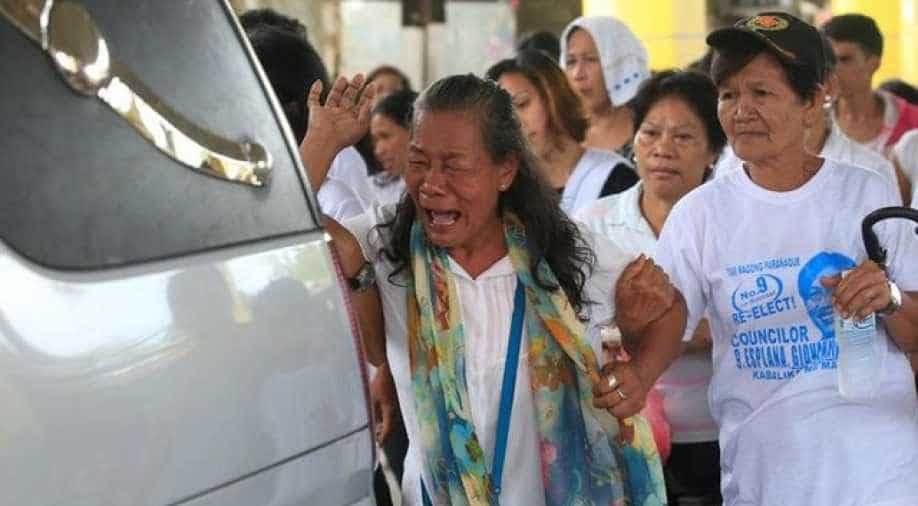 Mother of a teenager, who was shot dead by the police over suspicions about peddling of drugs, cried during the funeral. Photograph:( Reuters )

A wave of drugs-related killings in the Philippines appears to be "systematic, planned and organised" by authorities and could constitute crimes against humanity, according to an Amnesty International report released on Wednesday.

Amnesty said its investigation into President Rodrigo Duterte's war on drugs was based on 59 drug-related killings in 20 cities and towns. The agency said it concluded most appeared to be extra-judicial killings, and police accounts of shootouts and deaths during operations were "startlingly similar", and often far different to witness testimony.

The release of the report comes amid uncertainty over the anti-drugs crackdown and a government suspension on Monday of all police operations due to rampant corruption. The Philippine Drugs Enforcement Agency (PDEA) has now been given the lead role in the campaign.

Duterte made the decision after a security meeting on Sunday triggered by the kidnap and killing of a South Korean businessmen by drugs squad police. He said the incident, which took place at the headquarters of the Philippine National Police (PNP), had embarrassed the country and dented the image of the police.

Amnesty said the vast majority of the killings it investigated "appear to have been extra-judicial killings - unlawful and deliberate killings carried out by government order or with its complicity or acquiescence".

"The Duterte administration's relentless pressure on the police to deliver results in anti-drug operations has helped encourage these abusive practices," the report said.

The Presidential Communications Office did not immediately respond to a Reuters request for comment on Amnesty's findings.

The government has denied sponsoring extra-judicial killings, or police collaboration with assassins.

The investigation by the London-based advocacy group was carried out mainly in November and December and was completed in January. It said it interviewed 110 people and included witness accounts of victims being shot dead despite having shouted they would surrender.

It said it also found "strong evidence" of links between the authorities and unknown gunmen, as well as connections between cursory and speculative drugs "watch lists" created by local officials, and the people killed by police.

Amnesty's report included numerous references to a series of Reuters stories and investigations into the war on drugs in the Philippines (http://reut.rs/2jPSgSn).

The latest police data shows 7,669 people have been killed since Duterte unleashed his war on drugs seven months ago, 2,555 in police operations, which the PNP says were all in self-defence. The other deaths are classified as investigated, or under investigation.

Human rights groups believe most of those are drugs-related, carried out by vigilantes or hitmen.

Amnesty's top recommendation to Duterte was to "immediately order an end to all police operations involving unnecessary or excessive use of force", especially lethal force.

It recommended Duterte appoint a new independent head of police internal affairs and the justice ministry prevent intimidation of witnesses and victims and set up a task force to prosecute extrajudicial killings.

"The Philippine government needs to urgently adopt a different approach to drugs and criminality," it said.

"The impunity that currently reigns has facilitated killing on a massive scale, hitting the poorest and most marginalised segments of the population in particular."