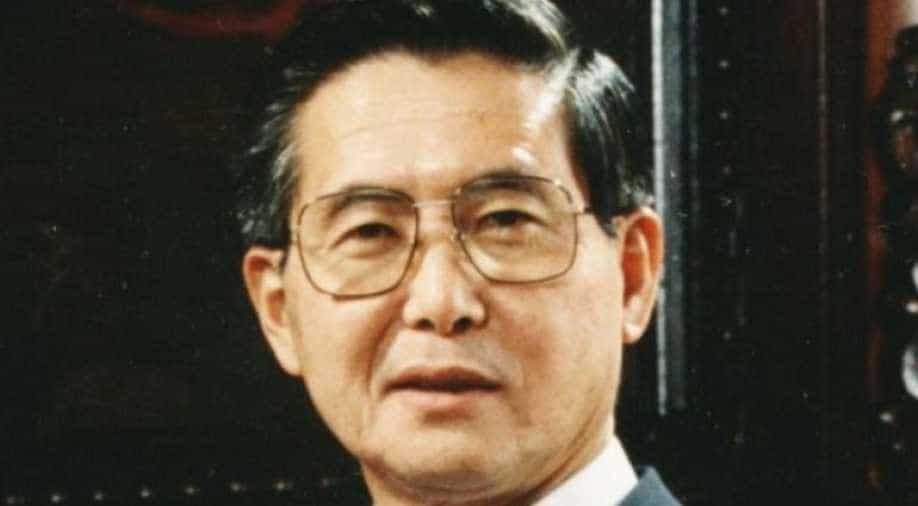 Fujimori was transferred from his cell to a clinic Saturday suffering from low blood pressure and an irregular heartbeat. Image via Wikimedia Commons. Photograph:( Others )

Peru's jailed ex-president Alberto Fujimori, who was serving a 25-year sentence for corruption and rights abuses, has been pardoned on humanitarian grounds, the presidency announced on Sunday.

"The president of the republic... has decided to grant a humanitarian pardon to Mr Alberto Fujimori and seven other people in similar condition," it said in a statement.

Fujimori was transferred from his cell to a clinic Saturday suffering from low blood pressure and an irregular heartbeat.

The 79-year-old had a "sudden drop of pressure with marked arrhythmia," doctors said.

"He is making adequate progress in the intensive care unit," said his physician Alejandro Aguinaga. "He will remain hospitalized for as long as necessary, until he has stabilized."

Fujimori, in office from 1990 to 2000 and imprisoned since 2005, was admitted amid rumors that he could be pardoned this Christmas.

Speculation about a pardon arose after his lawmaker son Kenji broke ranks with the ex-president's daughter Keiko, who leads the Peruvian opposition and was pushing last week to impeach President Pedro Pablo Kuczynski.

That allowed Kuczynski to survive a Congressional session on whether to impeach him. Analysts debated whether the president would pay off his political debt to Kenji Fujimori by pardoning his disgraced father.

Fujimori has been admitted to hospital on several previous occasions, the last time in September.

Despite his conviction for human rights abuses, Fujimori retains a level of popularity in Peru for having defeated the Marxist guerillas of The Shining Path and for stabilizing the economy after a period of crisis.

On Thursday Kuczynski survived a 14-hour session in Congress that failed by eight votes to institute impeachment proceedings.

Kuczynski had been accused of taking $5 million in bribes from Brazilian construction firm Odebrecht and then lying to cover his tracks.

He insists the money was simply a legitimate consulting fee.

Keiko Fujimori lost to Kuczynski in last year's presidential election and is herself facing questioning linked to the sprawling Odebrecht graft investigation.