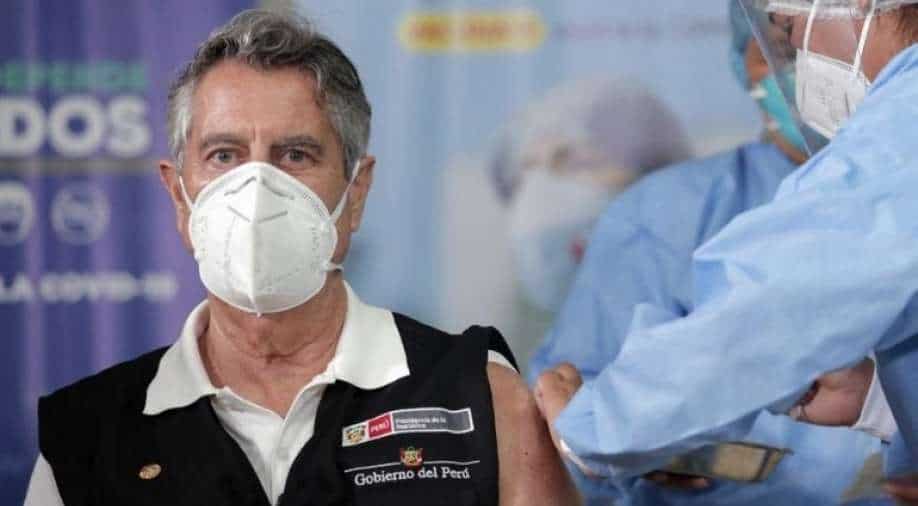 Peru’s interim President Francisco Sagasti gets vaccinated against Covid-19 at a military hospital in Lima on Tuesday. Photograph:( AFP )

Peru hospitals are overrun with almost 13,800 Covid patients while they have also reported a lack of oxygen to treat those with breathing problems

The country has been hard hit by a second wave of the coronavirus pandemic sweeping Latin America.

It has recorded around 1.2 million cases and more than 42,000 deaths from Covid-19 among its population of 33 million.

Hospitals are overrun with almost 13,800 Covid patients while they have also reported a lack of oxygen to treat those with breathing problems.

Healthcare workers at several hospitals in the capital Lima were the first to receive the vaccine on Tuesday morning.

Armed forces airplanes left the capital to take vaccines to the worst-hit regions of the country, such as the jungle area of Huanuco, some 350 kilometers (220 miles) northeast of Lima.

Peru will receive another 700,000 doses of the Chinese vaccine on Sunday. It has agreed to purchase 38 million doses of the Sinopharm vaccine and another 20 million of the Pfizer/BioNTech one.

Other deals have been made to purchase 14 million AstraZeneca/Oxford vaccines and 13.2 million Covax jabs.

Authorities are yet to announce when immunization of the wider population will begin, but the country plans to vaccinate 26 million people.

The government of President Francisco Sagasti has received harsh criticism over the delays in unrolling an immunization programme compared to neighbours Chile and Bolivia.

Sagasti himself was vaccinated on Tuesday evening at a Lima hospital.

"Don't be afraid of the vaccine," he said, adding that he hoped all "Peruvians are vaccinated this year."

Meanwhile, Argentina announced it has approved the emergency use of the Indian-made Covishield vaccine.

The Covishield vaccine is essentially the same as the British developed AstraZeneca/Oxford vaccine that previously received approval in late December.

Argentina has also approved the use of the Russian Sputnik V vaccine, having already received 820,000 doses.

It began its immunization programme on December 29 and has so far only used the Sputnik V vaccine.