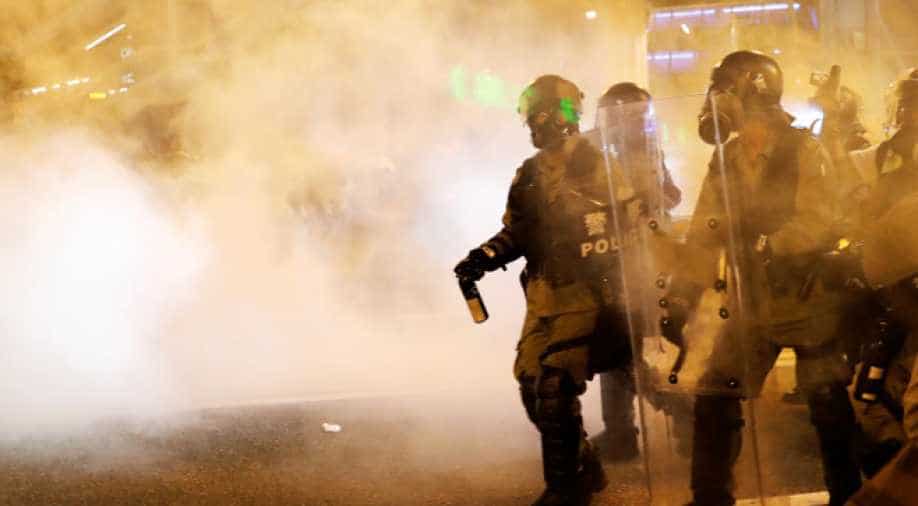 Lam, who was chosen by a Beijing loyalist committee, showed no sign of backing down or ceding to protester demands for greater democratic freedoms and an independent inquiry into police violence.

Hong Kong's embattled pro-Beijing leader on Monday accused pro-democracy protesters of trying to "destroy" the city in a dramatic escalation of rhetoric as the financial hub is rocked by two months of rallies and clashes.

Two months of protests and clashes with police have pushed the semi-autonomous city to a "very dangerous situation", chief executive Carrie Lam said, as she struck a defiant tone as strikes and travel chaos hit the city.

Lam has maintained a low profile as two months of unprecedented protests have raged.

But on Monday she held a press conference - her first in more than two weeks - as activists launched a civil disobedience campaign against the city's transport network, part of an attempted city-wide strike.

Lam, who was chosen by a Beijing loyalist committee, showed no sign of backing down or ceding to protester demands for greater democratic freedoms and an independent inquiry into police violence.

Instead, she condemned the increasingly violent and confrontational tactics adopted by protesters in recent weeks.

"Such extensive disruptions in the name of certain demands or uncooperative movement has seriously undermined Hong Kong's law and order and are pushing our city, the city that we all love and many of us helped to build, to the verge of a very dangerous situation," she said.

Widespread disruptions and violence, she said, were putting Hong Kongers "in a state of great anxiety" and she vowed to continue cracking down.

"The government will be resolute in maintaining law and order in Hong Kong and restoring confidence," she said.

"We saw recently, it is already clear that people are impertinently proposing to 'reclaim Hong Kong, revolution of our times'... and challenge the country's national sovereignty," she said, referencing the now most commonly-heard chant used at demonstrations.

"I dare say it is trying to topple Hong Kong, completely destroy the cherished lives of more than seven million people."

Protesters say they have been forced to adopt more violent tactics after years of huge rallies have failed to halt sliding freedoms in the city under Beijing's rule.

I would have read my damn briefs: Hillary Clinton on Trump's resistance to intel warnings