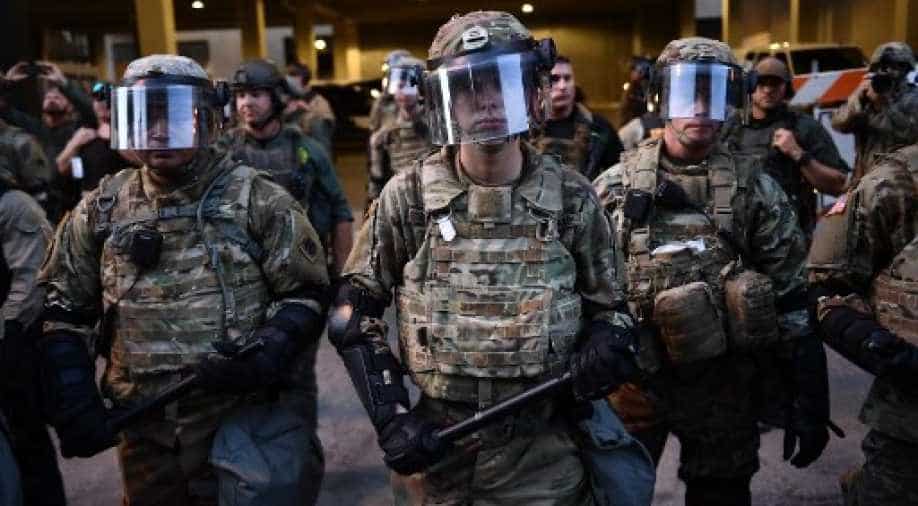 Mayor Muriel Bowser of Washington sent a letter to Trump on Sunday asking for an emergency declaration to obtain additional funding for inauguration security.

National Guard troops who are flooding into Washington to secure the Capitol for Inauguration Day will be armed, the Army secretary, Ryan McCarthy, has decided, Defense Department officials said Tuesday.

The armed troops will be responsible for security around the Capitol building complex, the officials said.

As up to 15,000 troops continued to arrive in Washington from all over the country, Defense Department officials had been weighing whether to deploy them with arms. McCarthy has decided that at the very least those around the Capitol building will carry weapons, said the officials, who confirmed the decision on the condition of anonymity.

McCarthy’s decision came after a meeting with House Speaker Nancy Pelosi, D-Calif. Pelosi, according to congressional staff members, demanded that the Pentagon take a more muscular posture after a mob, egged on by President Donald Trump last week, breached the Capitol.

Pentagon officials say they are worried about protests that are planned for the inauguration of President-elect Joe Biden next week. About 16 groups — some of them saying they will be armed and most of them made up of hard-line supporters of Trump — have registered to stage protests in Washington, officials said.

One Defense Department official said law enforcement agencies are planning for a range of outcomes, including a worst-case scenario in which people with firearms try to attack dignitaries, “suicide-type aircraft” try to fly into the capital’s restricted airspace and even remote-controlled drones that could be used to attack the crowd.

While those scenarios are among the more extreme, the officials said they were particularly worried about the possibility of multiple, violent confrontations, including with firearms, simultaneously flaring up around the inaugural dignitaries.

Mayor Muriel Bowser of Washington sent a letter to Trump on Sunday asking for an emergency declaration to obtain additional funding for inauguration security.

“In light of the attack on the Capitol and intelligence suggesting further violence is likely during the inaugural period, my administration has re-evaluated our preparedness posture for the inauguration, including requesting the extension of D.C. National Guard support through Jan. 24, 2021,” Bowser wrote.

Defense Department officials said that even the National Guard troops who were not directly supporting the Capitol complex, but were stationed elsewhere in the Washington area, would not be far from their weapons.

“We want our individuals to have the right to self-defence,” Gen. Daniel R. Hokanson, chief of the National Guard Bureau, said Monday during a telephone news conference. “If senior leadership determines that that’s the right posture to be in, then that is something we will do.”

All the National Guard troops coming to Washington, he said, are bringing their weapons with them.

The National Guard is expected to officially announce the arming of some of the troops Tuesday night or Wednesday morning. The decision is important because in the past, federal and local officials have shied away from militarizing the Capitol.

But the riots last week have brought into sharp focus the potential dangers that lawmakers and, potentially, the next president, face from supporters of Trump, who has continued to falsely claim that he, not Biden, won the election.