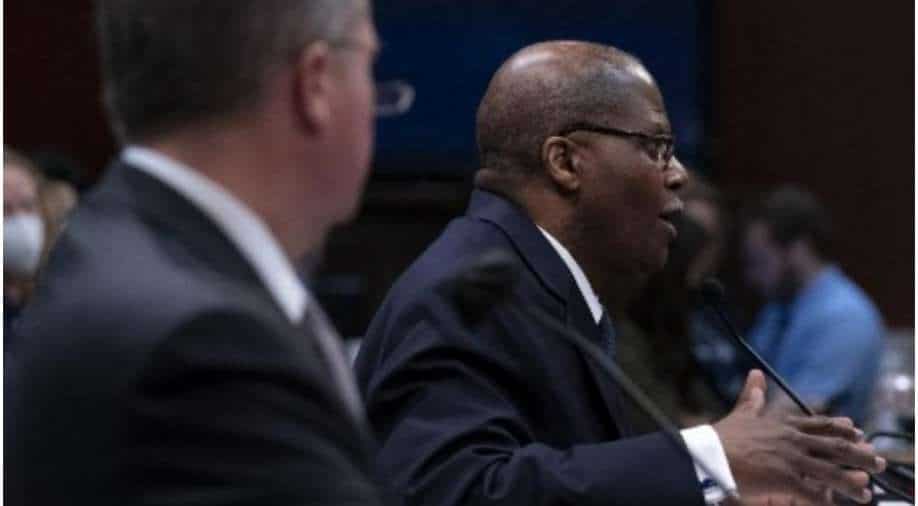 Defense Undersecretary for Intelligence and Security Ronald S. Moultrie and Deputy Director of Naval Intelligence Scott W. Bray, testify before the Counterterrorism, Counterintelligence, and Counterproliferation Subcommittee, during a hearing on "Unidentified Aerial Phenomena, on Capitol Hill in Washington, DC on May 17, 2022. Photograph:( AFP )

In one clip, a flashing triangle-shaped object in the night sky was seen.  The other showed a shiny, spherical object zipping past the cockpit window of a military aircraft. Pentagon official said that he had no explanation for the second clip

In the first such hearing in more than 50 years, top Pentagon officials showed unexplained UFO videos to members of US Congress. The term UFO (Unidentified Flying Object) is associated with aerial vehicle of extraterrestrial origin. US government is calling these "unidentified aerial phenomena" during the hearing.

Ronald Moultrie and Scott Bray, two top officials of the Pentagon appeared on May 17 before US House of Representatives intelligence subcommittee. They are appearing before the subcommittee 11 months after submission of a report documenting more than 140 cases of unidentified aerial phenomena, or UAPs, that U.S. military pilots have reported observing since 2004.

Bray, deputy director of naval intelligence, said that US officials are unable to explain some of these sightings. Bray said that some sightings generated too lityle data to arrive at a logical explanation.

But Bray added: "There are a small handful of cases in which we have more data that our analysis simply hasn't been able to fully pull together a picture of what happened." These, Bray said, have involved unexpected "flight characteristics" or "signature management."

"When it comes to material that we have, we have no material, we have detected no emanations, within the UAB task force that would suggest it is anything non-terrestrial in origin," Bray added.

"We know that our service members have encountered unidentified aerial phenomena, and because UAP pose potential flight safety and general security risks, we are committed to a focused effort to determine their origins," Moultrie, who oversees a newly formed Pentagon-based UAP investigation team as U.S. defense undersecretary for intelligence and security, told the hearing.

Scott Bray showed two UAP clips to the panel. In one clip, a flashing triangle-shaped object in the night sky was seen.  The other showed a shiny, spherical object zipping past the cockpit window of a military aircraft.

"I do not have an explanation for what this specific object is," Bray said of the second object.

Both the officials told the subcommittee that Pentagon wanted to remove stigma associated with sightings of UFOs and wanted to encourage pilots to report when they see such phenomena.

The notion of alien spacecraft received no mention in last June's UAP presentation. The focus, instead, was on possible implications for US national security and aviation safety, as it was in Tuesday's hearing.

The report did, however, include some UAPs previously revealed in Pentagon-released video footage of enigmatic airborne objects exhibiting speed and maneuverability exceeding known aviation technology and lacking any visible means of propulsion or flight-control surfaces.