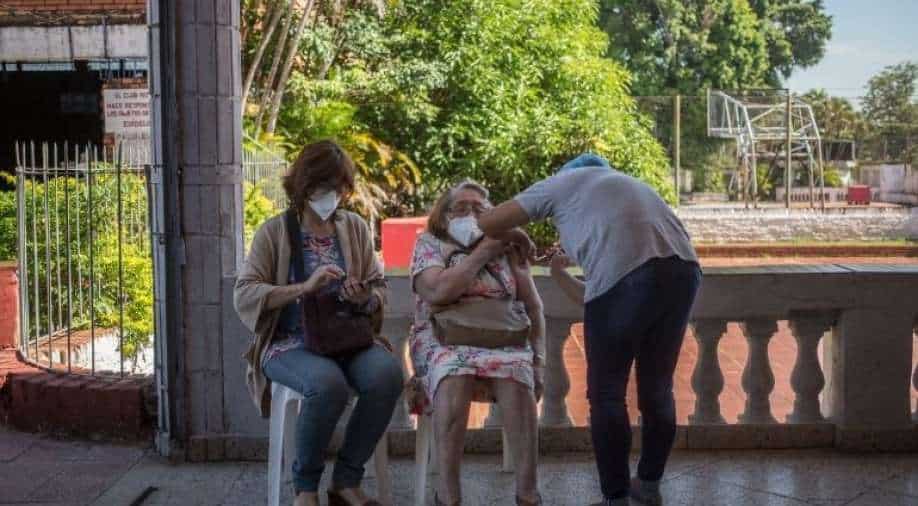 A senior is vaccinated at the Hospital de Barrio Obrero in Asuncion, Paraguay, April 14, 2021. Paraguay desperately needs COVID vaccines, which China could supply. That has led it to reconsider its relationship with Taiwan, which has built thousands of homes for the poor and spends generously on the health care system here. (Santi Carneri © 2021 The New York Times Company) Photograph:( The New York Times )

Taiwan has built thousands of homes for the poor in Paraguay, upgraded the country’s health care system, awarded hundreds of scholarships and even helped fund the futuristic Congress building in the capital, spending generously over decades to nurture their diplomatic ties.

But the alliance, which makes Paraguay one of only 15 nations to have full diplomatic relations with Taiwan, and the only one in South America, is facing an existential threat as Paraguay’s quest for vaccines becomes increasingly desperate.

With its health care system buckling as COVID-19 cases soar, Paraguayan officials across the political spectrum say the time has come to consider dumping Taiwan, which doesn’t export vaccines, in order to establish diplomatic ties with China, which does.

“This is really a life-and-death situation,” said Pepe Zhang, an associate director at the Atlantic Council who specializes in relations between Latin America and China. “In this very acute phase of the pandemic, less resourceful countries like Paraguay are asking where they’re going to get the vaccine.”

Zhang and a growing number of Paraguayans have come to see China as the most likely path to getting the vaccines they need — at least in the short run.

Western pharmaceutical companies have prioritized shipments to wealthy nations that placed orders early, leaving Latin America to rely predominantly on Chinese vaccines to blunt an epidemic that has left a brutal toll.

That has given Beijing considerable leverage in a region where it has a broad constellation of investments and projects. Suddenly, wresting Paraguay from Taiwan’s orbit — which would advance Beijing’s goal of politically isolating an island it regards as its territory — appears within reach.

Euclides Acevedo, Paraguay’s foreign minister, said recently that Beijing made it clear it was interested in establishing ties with Paraguay. He has dangled that prospect of making the diplomatic switch as he has sought to pressure Taiwan and its ally, the United States, to get vaccines to Paraguay quickly.

“What good is a fraternal embrace that leaves us in a state of respiratory failure?” Acevedo said late last month in an interview on the television network Telefuturo. “I think our strategic allies, including the United States and Taiwan, must respond.”

Beijing’s one-China principle forces countries to choose between having full diplomatic relations with Beijing or Taipei. Three countries in Latin America blindsided and angered the U.S. government in recent years by abruptly severing ties with Taiwan following secret negotiations with Beijing. The switch by those nations — Panama, the Dominican Republic and El Salvador — came with promises of growing trade with Beijing and has made them early recipients of Chinese vaccines.

Acevedo said Paraguay should explore what it would gain by doing the same. “President Xi Jinping has keen interest in partnering with us,” he said. “It’s a political debate that should draw input from all segments of the state and all of society.”

Yet it’s not clear that Paraguay has taken formal steps toward exploring a flip.

Charles Andrew Tang, who heads the China-Paraguay Chamber of Commerce, said he advised officials at the health ministry earlier this year on the paperwork they would need to fill out to request purchasing Chinese vaccines.

Tang, who is seen in Paraguay as a key interlocutor with the Chinese government, said it was conceivable that Chinese vaccine manufacturers would sell vaccines to Paraguay even without formal diplomatic relations.

But he said the onus was on officials in Paraguay to make the first move.

“The virus can spread across borders, but mankind’s love also transcends borders,” he told reporters.

This week China’s main COVID-19 vaccine manufacturer, Sinovac, made a gesture that is certain to fuel speculation about Beijing’s plans in Paraguay.

The South American soccer federation CONMEBOL, which is based in Paraguay, announced it was receiving a donation of 50,000 doses of CoronaVac, the COVID-19 vaccine produced by Beijing-based Sinovac.

“The leaders of this company have understood the enormous social and cultural value of soccer in South American countries,” the federation’s president, Alejandro Domínguez, said in a statement, calling the donation a “noble gesture.”

Despite all these signals, Taiwan’s position in Paraguay may be safer than it appears, said Lee McClenny, who served as the U.S. ambassador in Paraguay until September. While Cabinet members and business owners have pressured President Mario Abdo Benítez to forge ties with China, the Chinese government didn’t show much interest in getting Paraguay to flip, he said.

“On the ground I didn’t see very effective efforts to make this happen,” McClenny said.

Besides, McClenny added, the Paraguayan president takes a special pride in the relationship with Taiwan, which was brokered in the 1950s by his late father, who served as the personal secretary to Alfredo Stroessner, the dictator who ran the country for 35 years. And Taiwanese aid has made a major impact in the landlocked, impoverished nation.

The Biden administration has signaled its unease about the prospect that Paraguay could cut a deal with China. In a phone call with Abdo Benítez last month, Secretary of State Antony Blinken urged the Paraguay government to continue to “work with democratic and global partners, including Taiwan, to overcome this global pandemic,” according to a summary of the call provided by the State Department.

That message rankles opposition lawmakers, including leftist Sen. Esperanza Martínez, who served as health minister from 2008 to 2012. Martínez has long favored establishing relations with China, arguing that Paraguay stands to benefit in the long run by expanding trade. She said Washington’s exhortation was immoral.

“We’re being loyal to people who impose rules on us while we die,” she said. “Our allies are vaccinating people morning, afternoon and night while they block us from getting vaccines, saying we’ll turn into communists.”