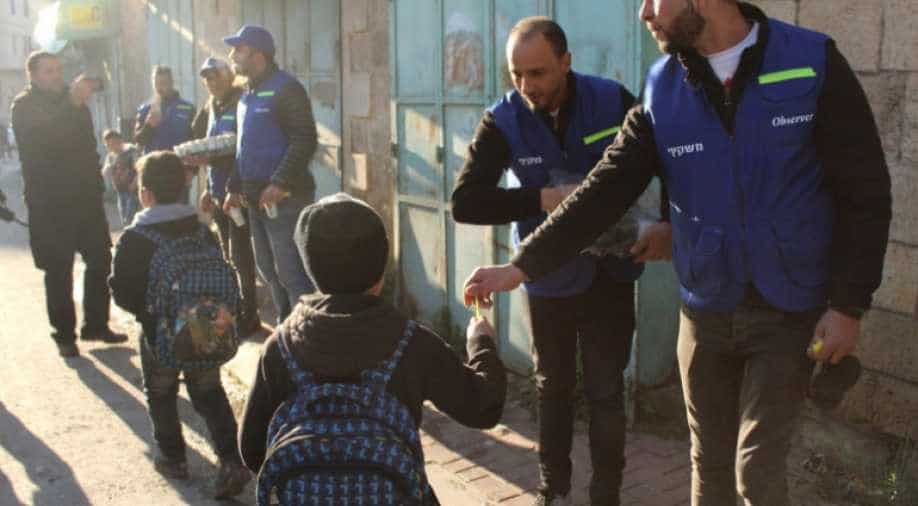 Dressed in blue vests and self-identified as human rights defenders, the group of locals acted in place of the TIPH, leaving early from the Tel Rumeida neighbourhood in the centre of Hebron, to escort Palestinian children to school.

Palestinian activists gathered early in the morning in the West Bank city of Hebron to accompany and keep safe dozens of children after Israel expelled observers of the Temporary International Presence in Hebron, a civilian monitor group, EFE reported Wednesday.

Dressed in blue vests and self-identified as human rights defenders, the group of locals acted in place of the TIPH, leaving early from the Tel Rumeida neighbourhood in the centre of Hebron, to escort Palestinian children to school.

"The main purpose of not renewing the TIPH mission is to isolate the Palestinians and to make us weaker," local activist, Issa Amro, 38, told EFE.

The Palestinian activist explained that he and fellow Palestinians had mobilized following Israel's refusal on January 28 to continue the TIPH's 22-year-long mandate in the city.

The TIPH was deployed in Hebron to protect Palestinians from Israeli settler aggression.

Amro said the absence of the TIPH in recent weeks had allowed Israeli settlers to harass local Palestinians while the Israeli police did nothing.

"If we are weaker, they can transfer us from our homes here, and they can bring settlers instead of us. It means that we do not have any official observers who write reports about the human rights violations here," Amro said.

Hebron is the only city in the occupied West Bank with Jewish settlements at its centre.

In its 22 years of work, the TIPH reported 40,000 human rights violations allegedly committed by the Israeli army and the settlers, Amro said.

The Palestinian activist lamented that his observer groups lacked the official United Nations' recognition enjoyed by the TIPH, which he said limited his powers.

On February 6, the UN Security Council – with the exception of the United States – repudiated Israel's decision to end the TIPH's mandate.

"We are concerned that the Israeli government's decision undermines one of the few established mechanisms for conflict resolution between Israelis and Palestinians and may, therefore, have a negative impact on the situation," the UN said.

The TIPH was organized between the Palestine National Authority and Israel after Israeli-American settler Baruch Goldstein in 1994 opened fire at the Hebron-based Ibrahimi Mosque at the Cave of the Patriarchs compound, killing 29 Palestinians.