Over 160 confederate symbols were removed in 2020, group says 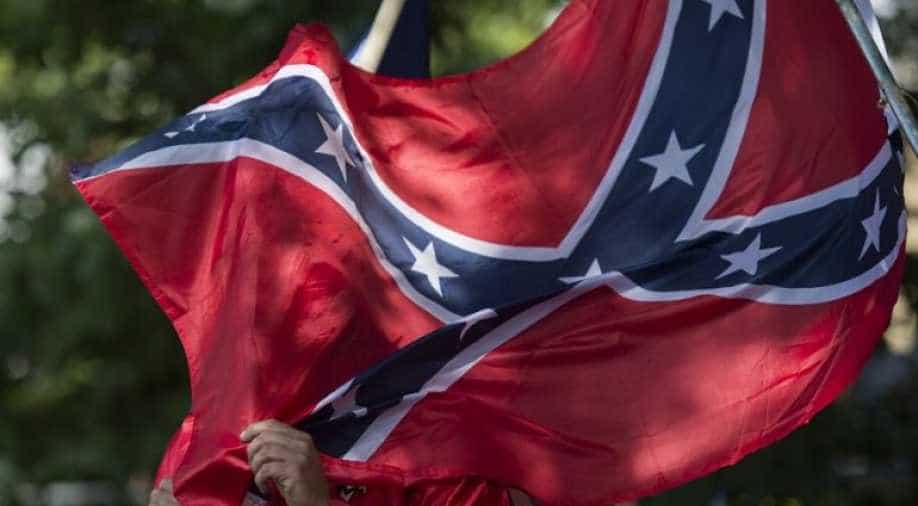 n this file photo taken on July 08, 2017, a member of the Ku Klux Klan holds a Confederate flag over his face during a rally, calling for the protection of Southern Confederate monuments, in Charlottesville, Virginia. Photograph:( AFP )

The Southern Poverty Law Center, which has campaigned for the removal of Confederate statues and monuments, released the findings as part of a report on the status of the symbols

More than 160 Confederate symbols were removed from public spaces or renamed last year after the death of George Floyd, more than the previous four years combined, a watchdog group said on Tuesday.

The Southern Poverty Law Center, which has campaigned for the removal of Confederate statues and monuments, released the findings as part of a report on the status of the symbols.

The nonprofit organization, based in Montgomery, Alabama, started tracking symbols of the Confederacy after a white supremacist killed nine Black worshippers at a storied African American church in Charleston, South Carolina, in 2015.

In the group’s “Whose Heritage?” report, the Law Center said that last year had been transformative, but that hundreds of symbols of the Confederacy remained.

“These dehumanizing symbols of pain and oppression continue to serve as backdrops to important government buildings, halls of justice, public parks, and U.S. military properties, including 10 bases named after Confederate leaders across the South,” Lecia Brooks, the center’s chief of staff, said in a statement.

Also read| After a year of Ahmaud Arbery's killing, his mother files lawsuit

All but one of the 168 symbols that were eliminated in 2020 were removed or renamed after the death of Floyd in the custody of the Minneapolis police in May, a moment that catalyzed widespread protests over systemic racism and police brutality. It also renewed a reckoning over symbols of the Confederacy and their meaning.

Virginia led the way in the number of symbols that were removed last year with 71, followed by North Carolina with 24, and then Alabama and Texas with 12 each, the report said.

Larry McCluney Jr., the commander in chief of the Sons of Confederate Veterans, criticized the movement to take down statues and memorials.

“So you’re going to say that a war was fought and there was only one side?” McCluney said in an interview Tuesday night. “We’re trying to purge or sanitize American history.”

McCluney said it was unreasonable to judge Confederate leaders by today’s societal standards. He also contended that many soldiers who fought for the South in the Civil War were buried in unmarked graves and deserved to be memorialized.

The Law Center said that 31 public schools were expected to change their names this year to sever ties with their Confederate heritage.

Last year, a 131-year-old statue commemorating Confederate soldiers was removed in Alexandria, Virginia, on June 2. Protesters in Richmond, Virginia, toppled a Jefferson Davis statue on June 10 and vandalized other Confederate memorials. On June 13, a statue of Davis was removed from the Kentucky Capitol Rotunda.

A statue depicting a Confederate soldier holding a rifle was removed from Charlottesville, Virginia, in September.

Several other Confederate monuments and memorials in multiple states were covered in graffiti during protests, which extended to other people and institutions seen as having a racist past.

In one case, a Confederate statue fell not to protesters or politicians but to Mother Earth: Hurricane Laura caused a 105-year-old statue in Lake Charles, Louisiana, to tumble in August.

Some institutions that long supported the imagery changed their tune.

In late June, Mississippi removed the Confederate symbol from its state flag. And this month, North Carolina said it had discontinued the use of a specialty license plate bearing the Confederate battle flag.

NASCAR banned the flag from its events and properties in June. Its announcement partly prompted President Donald Trump to defend the flag, beginning what would become a consistent pushback against efforts to remove Confederate symbols.

His stance put him at odds with his military. On June 6, the U.S. Marine Corps banned displays of the flag at Marine installations. On July 17, the Pentagon banned displays on military installations around the world, sidestepping Trump’s opposition and preempting similar action by the Army.

Military leaders indicated they were open to renaming 10 Army bases named after Confederate leaders, but Trump rejected the efforts.

Trump also vetoed an annual military policy bill that included a bipartisan provision to strip the names of Confederate leaders from bases, but the House and the Senate overrode the veto.

House Speaker Nancy Pelosi called for the removal of 11 statues of Confederate figures from the U.S. Capitol, not for the first time, but succeeded in removing only four portraits.

While the Law Center said strides had been made in removing Confederate relics, the group expressed concern about the symbols that were displayed during the Jan. 6 siege of the U.S. Capitol.

One man, who was later arrested, carried the Confederate battle flag inside the building.

“As witnessed on Jan. 6 when an insurrectionist brazenly carried a Confederate flag through the halls of the U.S. Capitol, Confederate symbols are a form of systemic racism used to intimidate, instill fear and remind Black people that they have no place in American society,” Brooks said.