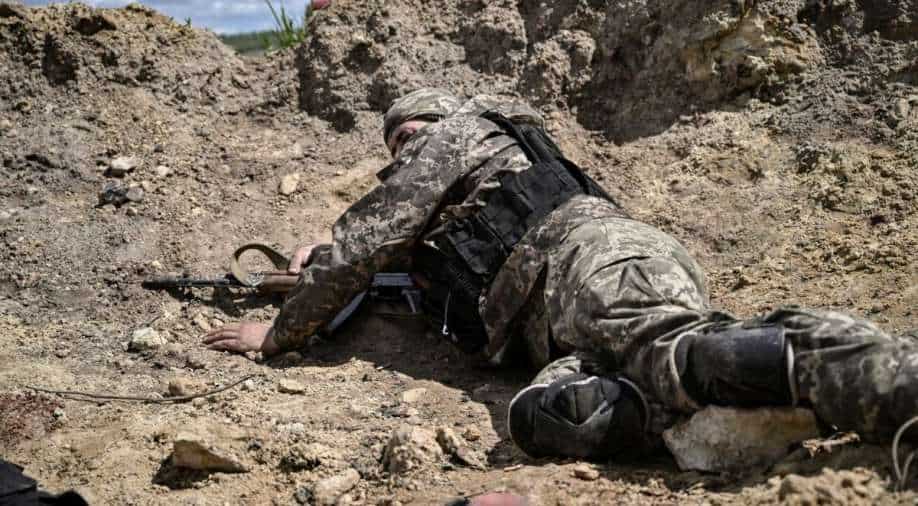 In the Russia-Ukraine war, there will be no winners, but a new set of security and economic challenges will impact the entire world. Photograph:( AFP )

While the kinetic, contact, hybrid war is on between Russia and Ukraine, the US-led NATO is fighting a non-kinetic, non-contact, undeclared war in economic, information, diplomatic and political domains, against Russia; hence de-facto parties to the war

As the Russia-Ukraine war completes three months, both sides are witnessing spectacular twists and turns, showing that reality is hitting both sides. Few would have predicted a month ago that President Putin would be willing to swallow the bitter pill of Finland and Sweden's bid to join NATO, which effectively amounts to NATO's eastward expansion, adding over a thousand kilometres of direct land border between Russia and NATO, and respond only with a weak warning to react to increased weapon deployment in these two countries.

Likewise, the rhetoric of Ukraine winning the war overhyped by the US led NATO through exhaustive information and perception war, seems to be fading with the surrender of over 2000 Azov fighters in Mariupol, cutting off Ukraine from the Sea of Azov, besides losing a large chunk of land in Donbas Region. President Zelensky's acknowledgement of diplomacy being the only answer, highlighting concerns for people and soldiers is not too late, if those interested in prolonging this war let him act on it.

Parties to the Conflict

The war is sparing no one in the world from inflationary pressures, having doubled the figures of the global food insecure population, due to acute food shortage, triggering the blame game by both sides to seek concessions. While Russia can be accused of launching a pre-emptive ground offensive on Ukraine, NATO can also be accused of creating conditions threatening Russia by continued eastward expansion and proxy war. While the kinetic, contact, hybrid war is on between Russia and Ukraine, the US-led NATO is fighting a non-kinetic, non-contact, undeclared war in economic, information, diplomatic and political domains, against Russia; hence de-facto parties to the war.

After three months of the war, while Russia can draw solace from sizeable territorial gains and linking Donbas with Crimea after capture of Mariupol, but at a very heavy cost of men and material, besides unprecedented economic stress due to crippling sanctions by the West. It has made President Putin revisit his stance on Finland and Sweden, as it is cost-prohibitive for Russia to open another front with NATO on Finland's borders. It, therefore, makes better sense for him to achieve the desired end state in the ongoing conflict with Ukraine by liberating Donbas Region, landlocking Ukraine and dealing with Finland later. Russia realises its limitations in economic, diplomatic, information and political warfare domain; hence more territorial gains on the ground to landlock Ukraine by extending the land bridge between Crimea, Odesa to Transnistria and liberating Donbas is the best option for it, to gain better negotiating position, to have the sanctions lifted.

President Zelensky appears to recognise that neither he nor the western propaganda-based information war, which has made him a hero and outright winner, can be sustained in the long run, having lost more territory the size of some European countries, left with devastated towns, over four million refugees, heavy casualties, and the surrender of his overhyped Azov Regiments. While additional aid and weaponry with a $40 billion cheque from the US and $16.4 billion from the EU can boost his combat power, but regaining lost ground from Russians is going to be extremely difficult, as they will use built up areas for defending their gains, as Ukraine did. Prolonging war doesn’t guarantee peace for Ukraine, but it may result in greater territorial loss, unending proxy war, and a long-term Russian threat.

NATO seems to be emboldened by the soft Russian response to the bid of Finland and Sweden to join NATO, with a confidence that Russia has been adequately weakened to challenge the eastward expansion of NATO; hence, it is keen to add these two countries with strong militaries, to secure its northern flank and have a better collective security posture in the long run. It also makes sense in the context of Sino-Russian footprints in the Arctic region and the North Atlantic Ocean. Towards that aim, it is ready to sacrifice some of its energy and economic interests for the time being.

It is too early to predict how long this show of unified strength will continue because the war is certainly not making Europe peaceful, with millions of refugees and non-state actors activated and a longer border with belligerent Russia, which will reorganise itself, learning from its miscalculations. While NATO may be able to handle the objections of Turkey and Croatia with few concessions/addressing security concerns, but the disagreement regarding long term energy security may not be easy to handle, once the rhetoric of united NATO starts fading with economic fatigue and energy deficit.

Is USA the Beneficiary?

In short term the USA can rejoice some immediate gains. It has been able to get control of NATO, weaken Russia, create market for its arms dealers, energy companies and infrastructure contractors. It has been able to block strategic Nord Stream 1 and 2, and encourage EU to find alternate energy sources, thereby reducing Russian influence drastically.

It has, however, incurred certain long-term losses, the most serious of which is driving Russia into a stronger China-Russia Axis than ever before, which is beyond its individual capabilities to handle. True, this battle has revitalised NATO, but it has also strengthened the Russia-China-Iran nexus, or anti-West alliance. Sanctions have fueled calls for an alternative financial system to avoid financial paralysis caused by a monopolized dollarized financial system, which could harm the US in the long run.

The US's global exhibition of backing proxy war by enabling Ukraine/Zelensky to fight to the bitter end in order to achieve its geopolitical aim of weakening Russia, with no American losses has tarnished the US's reputation as an ally/partner. Indeed, more than $56 billion in funding for a proxy war in Ukraine, which is more than double the amount spent in Afghanistan's 20-year war, reveals misplaced priorities, unless US is counting on making much more money from increased weapon sales by prolonging the war.

It has put Taiwan, Japan and South Korea on notice facing a similar threat from aggressive China, to which US has been extremely shy of sanctioning it, despite later breaching territorial integrity of many democracies in the South China Sea, violating Taiwanese air space at will, and incremental encroachment in Himalayas. The world, struggling with financial, food and energy crises, doesn’t want any extension of war, on any pretext.

The visit of President Biden to the Indo-Pacific is significant to restoring the declining confidence of allies and partners in the Indo-Pacific, without which, taking on China's challenge is difficult. Many in this region accuse Biden administration of reactivating Cold War 1.0 with Russia, diluting Cold War 2.0 with China, which is a bigger global challenge with better economic muscles. The proposed launch of Indo Pacific Economic Forum is to lure more regional countries to gain lost ground in economic engagement vis a vis China.

In a situation where NATO continues to persuade Zelensky to fight, giving hopes to recapturing the entire territory of Ukraine, and the Russians continue incremental efforts to achieve an end state of landlocked Ukraine and independent Donbas, the war will continue. Neither the sanctions have deterred Russia, nor blocking gas flow by Russia will deter NATO. As long as Ukraine is ready to be used as a tool in big power contestation and NATO continues to add fuel to the fire, the chances of talks or any mediation seem to be a remote possibility. In the Russia Ukraine war, there will be no winners, but a new set of security and economic challenges will impact the entire world.

Having tested US responses in Ukraine, the growing Chinese aggressiveness in Indo-Pacific is a wake-up call to US to avoid losing influence in the region, especially after losing considerable strategic space in the Middle East and Af-Pak regions. Chinese footprints in the Solomon Islands surprised US and Australia. Regular violation of ADIZ of Taiwan, belligerent North Korea threatening South Korea and Japan, reassertion of Chinese and Russian claims against Japan indicate that US resolve is under greater threat in the Indo-Pacific, where it has obligation to defend Japan and South Korea and the strategic necessity to save Taiwan. It is also not easy to find another Zelensky/Ukraine in Asia, willing to act as proxy of NATO. It is, for this reason, President Joe Biden needs partners in Indo-Pacific, to strengthen/expand Quad, and put up viable alternative economic, infrastructure, technological and supply chains in Indo-Pacific with allies and partners. The UK Foreign Minister’s call for Global NATO seems far fetched at this point in time but indicates desperation for global support to face the reality of the threat from growing Chinese Russian alliance.