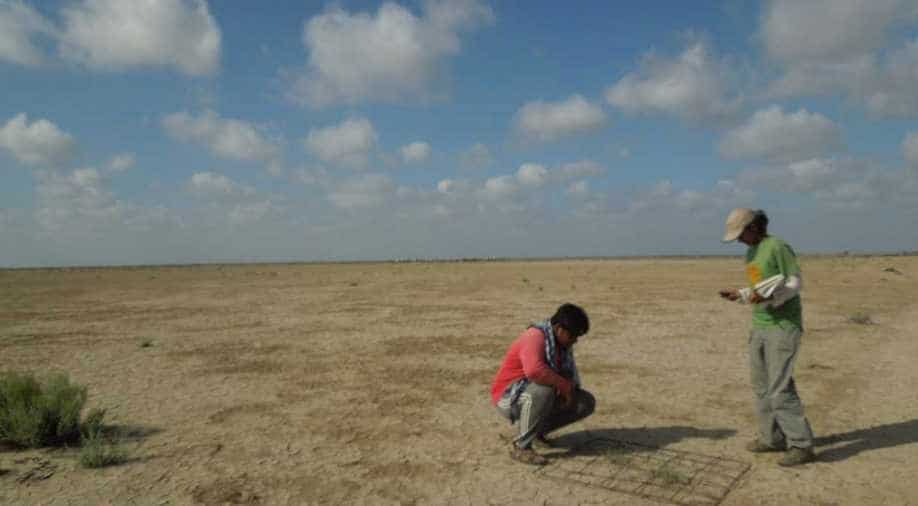 Ali bhai and the author with the quadrat (Photo courtesy: author) Photograph:( Others )

Ali bhai (my field assistant) and I were doing fieldwork around the Berdo village of western India in October. Part of a larger arid grassland and pastoral landscape (called Banni), Berdo is about 80 kilometres from our field station. Back in 2014, Berdo was also slightly off our regular fieldwork haunts.

We (rather I) were trying to understand how the vegetation changes with livestock grazing intensity. Ali bhai was more curious about why I would bother to travel all the way to the harsh environment of Banni, just to count how many individuals of different grass and herb species were present in 1x1metre quadrats, that too for a salary as meagre as mine.

I can’t disagree that fieldwork can sometimes be tedious and painstaking and the weather unkind. Especially when temperatures soar close to 50oC.  But who can resist the sheer beauty of vast grassy flatlands, stretching as far as the eye can see. Dotted with trees and shrubs, home to peculiar wildlife, and shaped through historical times by climate and pastoral communities, this landscape has never ceased to amaze me.

Communicating my awe for the land to Ali bhai was sometimes challenging. This is where he spent most of his life and thus the ‘novelty index’ scaled slightly on the lower side for him.

With no witty come back to his curious ponderings, I would often encourage Ali bhai to set aside his questions for our lunch breaks. We had no time to spare - in arid landscapes the window for collecting herbaceous vegetation data is short. Post-monsoon, grasses begin to dry out fairly rapidly and telling one grass species apart from another becomes challenging.

This is a story of one such fieldwork day near Berdo; only this was a rather atypical one.

Our Bolero Camper 4x4 was loaded with all the gear we needed for the day- a hand-held GPS, our 1x1meter gridded metal frame, a rope and measuring tape to record grass height, a hammer and metal pipe marked at 15cm depth for digging out soil cores. With the inventory tallied and items ticked off our checklist, we were good to go.

Target for the day – collect vegetation data and soil cores at 9 locations.

Things were progressing smoothly and by noon we were ready to proceed to location No.5. With the coordinates logged into the GPS, Ali bhai driving, and me navigating, we reached within 20 metres range of the exact location.

Two children grazing a small herd of livestock, mostly goat and sheep, were curiously watching us unload some of the gear. Sensing a degree of fear in their innocent eyes, Ali bhai decided to engage in small talk. In Kachchhi (the local language) he hollered at one of the kids - “Kiyan-thi?” (Where are you from?).

Now, Ali bhai is at least 5.8” tall and unapologetically hefty. I, on the other hand, have often been mistaken for a boy in my field attire. The sight of unfamiliar faces lurking around on their land with a hammer in one hand and rope in another, topped off with Ali bhai’s booming voice, set the kids to scurry back to their village in a complete frenzy.

For some strange reason, Ali bhai didn’t have a good feeling about this situation. Determined to keep the work going, I asked him to not worry. After all they were kids and scare easily.

With great reluctance, Ali bhai decided to lend me a hand with the fieldwork. Within a few minutes of us beginning work, we saw a motorcycle approaching our direction with great speed. The kaka (older uncle) in the pillion seat was holding a lathi (a long, heavy stick). Now, it is not at all uncommon to see herdsmen carry a lathi with them. Herding is not easy, and a lathi can come in handy while corralling up livestock. I looked at Ali bhai with the ‘nothing to worry, just a kaka, with a lathi, probably going to look for his lost buffalo herd’ look. He gave me no such reassuring look back.

Within seconds, we see another vehicle tailing behind the motorcycle with even greater speed. This one was a jeep with at least a dozen such kakas with a dozen more lathis. My thoughts had finally concurred with Ali bhai’s and we knew we had trouble coming.

In a jiffy the motorcycle and jeep were parked right next to our Camper. The next few minutes of the story could well be straight out of a bollywood movie. No points for guessing - Ali bhai and I were the villains, the kids, the victims and the men in lathis, the heroes.

The man riding the motorbike approached us first. Rapid Kachchhi was exchanged between Ali bhai and him. I couldn’t follow much of what was being said, but the underlying anger was abundantly apparent, even to the linguistically challenged.

In the meanwhile, the lathi-carrying kakas had surrounded us. While talking to Ali bhai, one of them pointed at me, presumably enquiring about my presence there. I took this as a cue to jump into the conversation and really figure out the source for this indignation.

I decided to tell them about this alien profession of being an ecological researcher. I did ease into it by mentioning that I’d already spoken to the village Sarpanch (headman), the local pastoralists’ association and a regional NGO to conduct my fieldwork. Eventually, I led them to our field gear to establish some legitimacy and more importantly, in hope to swap anger for curiosity and resolve the tense situation.

With most men still suspicious of our intentions, Ali bhai and I soon realised that we weren’t faring so well on the convincing front. I finally made a call to Pankaj bhai, our contact at the regional NGO, to vouch for our work and us.

While Pankaj bhai ensured that he had our backs, Ali bhai quickly translated the earlier conversation in Kachchhi that I had completely missed.

The story goes like this – the petrified children who had returned to the village informed everyone about us, the two strangers. They even said that we had a gun on us. And that we might be out there trying to pull off a kidnapping stunt. They were kind enough to give us some benefit of doubt and suggested that we might possibly be out there to steal livestock, and not necessarily kidnap them. But that was open for each one’s deduction.

I was in utter shock! On field, I have been mistaken for a boy, a mechanic, but never a KIDNAPPER! Never in my wildest dreams had I imagined being fraught with an accusation as grave as kidnapping.

Another piece of information that threw me off was the GUN. I have NEVER even touched a gun in my life!

Ali bhai later explained to me that the kids mistook the quadrat for a gun. Also, there was a kidnapping incident in the village a few months ago. I could see how all this may have added to the children’s angst.

The phone conversation with Pankaj bhai ended. Everyone looked more at ease. One of the kakas even examined the quadrat himself, cackling at how this could have been mistaken for a GUN. We all had a hearty laugh.

I was relieved that the entire party departed on a humorous note and ‘kabhi madat chahiye hoga toh phone karna madam’ (If you ever need any help, give us a call madam) as last words.

Some days on the field can be baffling, loaded with unprecedented surprises. Learning to trust your instincts (in this case, my field assistants) might sometimes be the only way to deal with them. 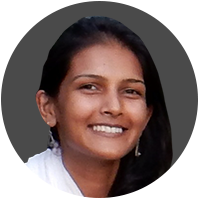 Priyanka Runwal is an ecologist and researcher affiliated with the National Centre for Biological Sciences. She is interested in arid grassland and savanna ecosystems.