'Only defence we have against COVID-19 is to prevent it from multiplying', says recovered COVID-19 UK doctor 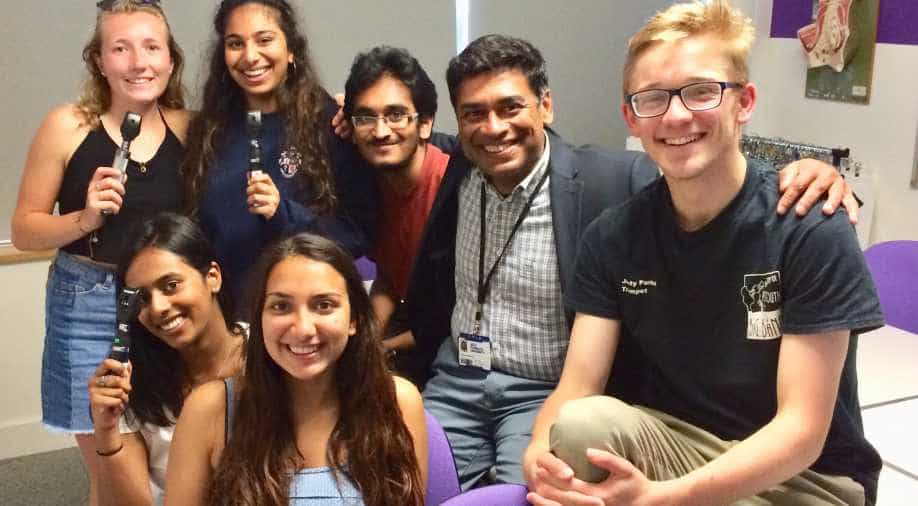 Gunasekera, better known to his friends and colleagues as PG, grew up in Kandy, Sri Lanka, and led the Guard of Honour that was accorded to Queen Elizabeth II at the time of her official visit to the city in 1981.

Describing his ordeal as no less than a horror movie, Dr Poorna Gunasekera (Associate Professor of Biomedical Sciences at the University of Plymouth), saw some ray of hope after his ex-students started taking care of his treatment.

Attributing his health issues to the weakness, it took Gunasekera 10 days to understand that he had COVID. He remained in denial about his symptoms when he had a fever above 39 degrees Celsius (102 Fahrenheit) and had lost 6.5 kilograms in a matter of days as a result of diarrhoea.

Soon, he was rushed to Derriford Hospital in Plymouth in the early hours of March 30. His daughter Saki and her boyfriend George Petrie also suffered from the illness but ended up having much milder symptoms after going into self-isolation.

Gunasekera, better known to his friends and colleagues as PG, grew up in Kandy, Sri Lanka, and led the Guard of Honour that was accorded to Queen Elizabeth II at the time of her official visit to the city in 1981.

He came to the UK in 1999 having been awarded a Commonwealth scholarship to study for masters at University College London and has been in the academic field that feeds the National Health Service ever since.

In an exclusive interview to WION's Ayushi Agarwal, Gunasekera shared his account of dealing with this deadly infection.

Edited excerpts from the interview:

WION: As a survivor what was your experience, when did you get infected and what was the process thereafter. How did you realize that you had COVID? Tell us the story after?

DR POORNA- I think It was more like a horror movie. The first signs manifested on 20th March and I really don't know how I came in contact with COVID. I was in London the week before, with my daughter Saki (short for ‘Thisakya’), and her boyfriend George, who developed COVID-associated symptoms of loss of taste, smell and headache just one day before I did (on 19th March 2020 to be specific). Some friends in Italy told us that this was one of the manifestations. There were many other atypical manifestations. Hence, we all started to self-isolate from that day.

Saki started to improve within 3 or 4 days. She was the first to recover completely

George’s sense of smell and taste took about 2 weeks to recover, though he too was feeling otherwise well by around the 7th day of illness.

My own symptoms persisted for longer. It was mainly explosive diarrhoea starting on day 4 of illness, that led to a loss of 6.5 kilograms and the generalised weakness that resulted. The feeling of shortness of breath, which I attributed to the generalised weakness, began to get progressively severe and took a sharp turn to the worse on 9th day of illness. I was admitted to the hospital during the early hours of 30th March, a day later.

My X-ray showed that both of my lungs had some changes. Still, they didn't transfer me to the COVID "red zone"  as they called. The first test came negative. Second, came positive. They then transferred me to the red zone which is serious and is one step below to the intensive care. This is how I first realized that I had COVID.

WION: How did you meet your ex-students in the hospital? How did you feel after being treated by them?

DR POORNA- You can't really recognize anyone in the hospital. Everyone was covered. Completely isolated. It was at that time that 3 of my former students who were completely covered came and meet me. Slowly I began to recover. At that time when I was really really sick, but I felt a sense of freedom and peace that I have never felt before. But there was no sensor input. I did not know where my feet and hands were. Still, all my sense of worry disappeared from the mind. I thought I was getting better.

I was behind the red zone for 7 days.  And then the oxygen requirement kept dropping. Soon, my temperature was stable. My lymphocytes began to come up.

I was in solitary confinement.

The one thing we started talking when the oxygen was off, was about the fear that we will take COVID back to the community because even now I have been home for 10 days. I have a little garden but haven't stepped out.

I came home on the 9th of April. Today is a good day. It has not been steady recovery. Some days I feel are worse days than others, and you develop strange symptoms. We are dealing with it and it is getting better.

WION: Because you also happen to be a doctor, it could have been easier for you to understand. What is your assessment of this disease?

DR POORNA- From the medical opinion, I read that some first doctor from China who raised the alarm said that this is some atypical form of pneumonia, and that is completely true. When I saw that X-ray, the consolidation on the X-rays was very different what you see in normal pneumonia.

It is more like a plume of smoke going through the lungs. That was unusual.

The initial thing might be in the lungs. But all the organs are affected. It is a very dangerous pathogen. It is a very sad belief that it only infects a certain age. Here in the UK, we have the case of a nurse of just 32 years who died of COVID. Another was a pregnant one, with the child who died. It is an extremely dangerous disease because it has the ability to go from one person to the other.

WION: For a layperson what is your message to understand the disease and how do you suggest to cope with it?

DR POORNA- The message to the public is that the only defence we have against COVID is to prevent it from multiplying. In my case, I had just two options.  Either I would overcome the disease, or it would kill me.

The only way it (disease) could survive if we transmit it from one person to the other. Just like passing the parcel. The danger is that we may do it without being aware that we are affected. This is a difference between COVID and SARS.

It is a hugely dangerous disease. It is important to maintain social distancing, to prevent direct transmission.

We have no treatment for COVID. It is the battle between COVID and us. Once we get it, it's just us against COVID. There is no treatment, there is no vaccine to protect. The only thing that we can do is to avoid exposure. We can only avoid exposure if we isolate ourselves. isolating completely may be practically difficult for doing, but that is the only thing that can stop COVID.

Some countries are lifting restrictions, but COVID might be lurking in that population.

This is like a horror movie. We have to fight it on an individual basis. This is where I believe small communities can come together. Maybe COVID can make us a better species. We may learn the lessons.

Real health lies with us. I am a huge fan of India and your ways of dealing with stress and anxiety. This is what we really need to do. If we stop harming ourselves, we don't need to go and rush to the hospitals.