Only 3 of 45 pilot whales survive mass stranding in Indonesia 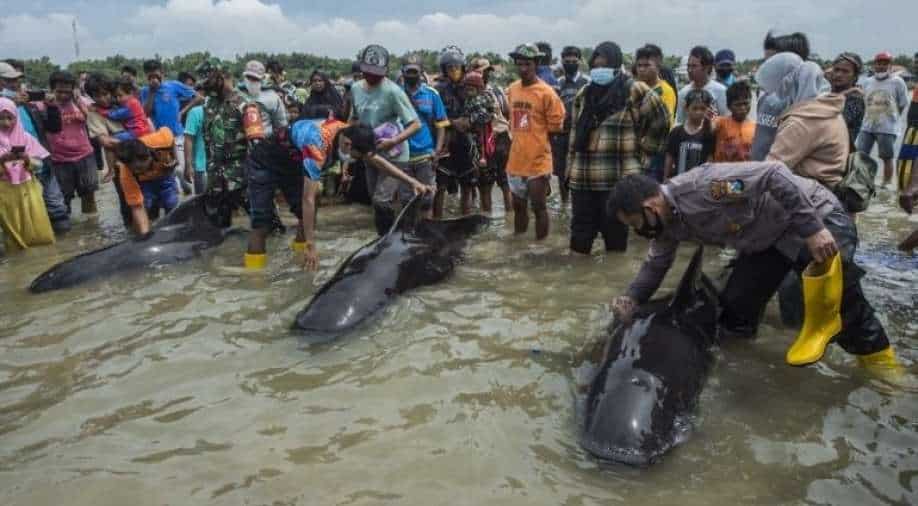 Only three of 45 short-finned pilot whales survived the mass stranding on Friday in shallow waters on Indonesia's Madura Island off the northeastern coast of Java, officials said.

The three whales were pushed back to the sea by volunteers and local authorities along the Modung beach in East Java province.

East Java Governor Khofifah Indar Parawansa said authorities are investigating the cause of death while the carcasses will be buried around the coast.

The volunteers, who are helping them to get back to the ocean, said that some whales got back to the coast again as their mothers are still stranded at the beach, Parawansa said.

According to data from Whale Stranding Indonesia, there were 59 beaching incidents in the country last year, most of them dugongs and spinner dolphins.

Meanwhile, Israeli officials have said that a dead whale has washed up on a beach south of Tel Aviv.

David Halfon of the Nature and Parks Authority said on Thursday that the animal was a fin whale calf about half the size of an adult, which can grow to more than 20 meters (about 66 feet) long.

He and other officials said it wasn't clear what caused the death, but they said the water nearby is polluted, including with tar.

It's a very sad event, Halfon said of the whale's death and appearance in the Nitzanim Reserve.

Aviad Scheinin of the Morris Kahn Marine Research Station said a team will take samples from the animal to try to determine a cause of death.

He called for an investigation and prosecution of those responsible for the pollution. A similar whale washed up dead in the area in 2016.