Once a beacon of hope in Turkey, Kurdish school shut down 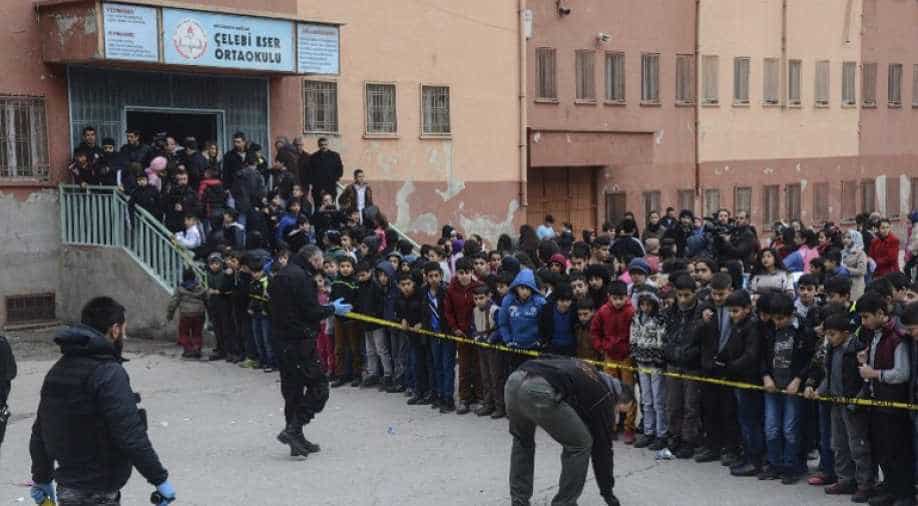 The Turkish constitution says 'No language other than Turkish shall be taught as a mother tongue'. (Representative image) Photograph:( AFP )

When a school opened three years ago in Turkey's biggest Kurdish-majority city, it was a symbol of Ankara's changing -- and more liberal -- attitudes toward Kurdish-language education.

The school in the southeastern city of Diyarbakir was one of five primary schools since 2013 that offered a fully Kurdish-language education.

From 2014 onwards, it was also the first school in Turkey to give parents their children's report cards in the Kurdish language.

But that has now come to an end after it became the first Kurdish school to be closed down in October by the governor.

All five such schools in the southeast have now been shut.

Some 238 students aged between five and 11 have been left without a school place in the new academic year.

The move comes after a fragile ceasefire collapsed last year with Kurdish militants waging an insurgency inside Turkey and a crackdown since the July 15 failed coup on those suspected of links to rebels.

Parents and teachers only discovered the school had been shut down when a seal was placed on the door by police saying it was closed due to violations of Turkish laws.

But the school's defenders say it was always acting outside of the law against offering a fully Kurdish language education but with the state's knowledge and tacit approval.

Kurdish language education had been forbidden under the Turkish constitution, which states: "No language other than Turkish shall be taught as a mother tongue to Turkish citizens at any institution of education."

Some Turkish officials also feared the use of the Kurdish language would divide the country along ethnic lines.

But in June 2012, then-prime minister now President Recep Tayyip Erdogan said Kurdish could be taught in public schools as optional courses if there were sufficient number of students.

It was part of a number of government reforms under Erdogan to ease restrictions on the Kurdish language and Kurdish broadcasts under pressure from the European Union as part of Ankara's membership bid.

Sources in the governor's office told AFP that the school was closed because of "unauthorised activities", while the latest report by the schools management board on it was critical.

The school was named after Ferzad Kemangar, an Iranian Kurdish primary school teacher executed by Tehran in 2010 on charges of membership in the outlawed Kurdish militant group PEJAK, which his supporters have always vehemently rejected.

Two days before closing on October 9, the inspectors visited the school and their report said the education provided was "contrary to national education regulations and legislation".

Despite reforms, the status of such schools was never made officially legal.

'Waiting for my school'

Adil Ercan, a teacher at Ferzad, said inspectors did not have anything "unfavourable or unsuitable" to say about the school.

He added, they were told on October 7 the school would be closed and would have 15 days to challenge the decision.

But two days later, parents called teachers in the evening asking what had happened after the school was sealed with only a piece of cardboard with a red seal.

"We arrived in the morning and it was sealed. They did not give us any reason. We will seek our legal rights," Ercan said.

Disappointed students and parents told AFP that they would wait at home until it opened again, including seven-year-old Sarya Alici.

"I am waiting for my school. Whenever it opens, I will go. What will I do if it doesn't open? I will wait at home."

Cihan Koyun said her family would not send children to another school. "We are waiting for our school to open. Whatever happens, our school must open."

Since the attempted putsch, pro-Kurdish media outlets have been shut down, mayors in majority Kurdish cities have been arrested and lawmakers from the pro-Kurdish Peoples' Democratic Party (HDP) have also been jailed under the state of emergency, imposed late July.

They are accused of acting as propaganda for the outlawed Kurdistan Workers' Party (PKK), a proscribed terror group by Turkey and its Western allies.

The Kurdish militants are not linked to the attempted coup and critics say that the government is using the state of emergency to intimidate all its critics.

The government insists it is not attacking the Kurdish community, an estimated 20 percent of the population -- but dealing with PKK "terrorists" fighting against Turkey since 1984.