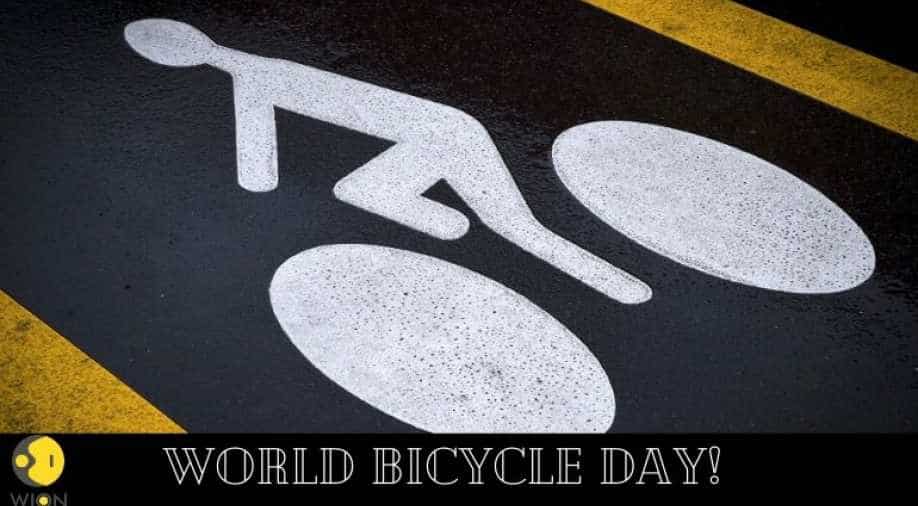 A lot prominent voices from India and abroad took to social media to further inspire people to take up cycling and to decrease the dependence on fuel based vehicles which cause pollution in cities across the globe.

The United Nations Development Programme, the UN's global network for development tweeted about the day.

Wednesday is #WorldBicycleDay. Share your reasons for 🚲 and check out the history of World 🚲Day from the @UN: https://t.co/KqwbnC4hPp

Peter Sagan, a Slovak professional road bicycle racer called on people to take their bikes "to school, to work... and to be adventurous".

Today is #WorldBicycleDay! Take your bike to school, to work, to reach the Castle if you're in Bratislava, to go to Piccadilly Circus if you're in London, to be adventurous like me, or to just ride wherever you are in the world!@iamspecialized #diverge @c40cities pic.twitter.com/kfHgzhKb5m

The United Nations Entity for Gender Equality and the Empowerment of Women, generally as UN Women, tweeted out a random fact about bicycles and women's rights! Check it out below!

Did you know that bicycles helped set the wheels of change in motion to advance women’s rights?

United Nation's Environment Programme talked about the benefits of cycling!

This is an opportunity to take stock of the benefits of the bicycle both for staying healthy & as a sustainable mode of transport during (and after) the global crisis: https://t.co/eylBmscTUB#ForNature pic.twitter.com/5yIJsE8QMh

Indian Vice President M Venkaiah Naidu called upon "people to promote the use of cycle" for its affordability, simplicity, and environment friendliness.

On World Bicycle Day, I call upon people to promote the use of cycle as it is a simple, affordable and environment-friendly means of transportation.

There is a need to develop a culture of cycling in view of its beneficial impact on health & climate. #WorldBicycleDay pic.twitter.com/JU2Ws1FHjm

Indian sports minister Kiren Rijiju shared his experiences on bicycles while advocating its use in daily life.

Today is #WorldBicycleDay. I urge upon everyone to use cycle as much as possible on daily basis. It's affordable and lead to reductions in air pollution, traffic jams, and increases people's physical activity levels. Stay fit.#WorldBicycleDay2020 pic.twitter.com/QIR0MDWNkA

On #WorldBicycleDay, let's put the pedal to the metal and accelerate our journey towards a clean & green #FutureOfMobility.

A smart & convenient solution for a healthier India. #HumFitTohIndiaFit pic.twitter.com/49RPLwIcy2

The Union Cycliste Internationale, world's governing body for sports cycling and for regulating international competitive cycling events shared a lighter message while reminding people to keep smiling while they bike!

Wherever your bicycle takes you, make sure to #RideandSmile pic.twitter.com/srRF3ltHEg

Cycling regularly is considered highly beneficial for the body and helps one improve their cardiovascular fitness, is known for improving flexibility and strength, and in overwhelming times can help in controlling stress level. Regular cycling can also help prevent diseases.

With gloves and masks, Singaporeans vote in general elections