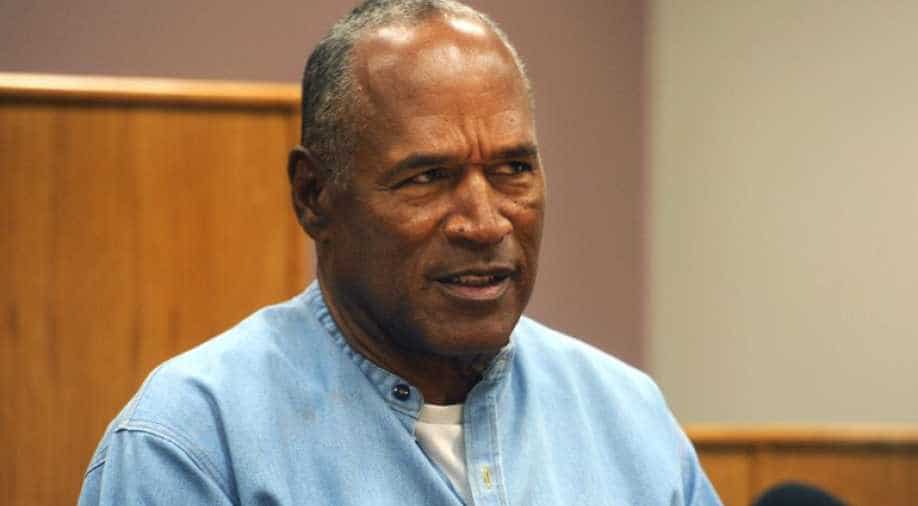 Simpson was found not guilty in 1995 of the grisly murders of his ex-wife, Nicole Brown Simpson, and a male companion, Ron Goldman, in a racially charged case that transfixed America and became known as the "Trial of the Century." Photograph:( AFP )

As of Dec. 1, Simpson, 74, was granted his full freedom after four years of supervised release

O.J. Simpson is no longer under parole supervision in connection with his 2008 robbery conviction in Nevada, a state law enforcement official said Tuesday, noting that the former football star’s parole obligations were lifted two months early because of good behaviour.

As of Dec. 1, Simpson, 74, was granted his full freedom after four years of supervised release, Kim Yoko Smith, a spokesperson for the Nevada Department of Public Safety, said in an email.

The decision came one day after Simpson, a member of the Pro Football Hall of Fame who was famously acquitted of double-murder in the 1990s, appeared before the Nevada Board of Parole Commissioners for an early discharge hearing.

Simpson had been on parole since 2017 after his release from prison, where he served nine years. The sentence stemmed from an armed confrontation a decade earlier in a Las Vegas hotel room over what Simpson contended was sports memorabilia that had been stolen from him.

Malcolm LaVergne, a lawyer for Simpson in Las Vegas, did not immediately respond to a request for comment Tuesday, but told The Associated Press, “Mr. Simpson is a completely free man now.”

LaVergne did not comment further on the post-parole plans of Simpson, who the AP reported had been living in a gated community in Las Vegas.

Since his release from prison, Simpson has hit the golf course and Twitter, opining on fantasy football, politics and other topics in video posts.

It has been a stark contrast from Simpson’s days as a telegenic ambassador for the NFL, where he was selected first in the 1969 draft by the Buffalo Bills and won four rushing titles. Nicknamed the “Juice,” he was a pitchman for Hertz and appeared in “The Naked Gun” movie franchise.

All that changed in June 1994, when Simpson’s ex-wife, Nicole Brown Simpson, and her friend Ronald Goldman were found murdered outside her Brentwood home in Los Angeles. Simpson, a prime suspect, led the police on an hourslong slow-speed pursuit in a white Ford Bronco that was chronicled on live television by news helicopters before surrendering.

Simpson was later acquitted of the double-murder after a nearly nine-month trial that captivated the nation. In 1997, he was held liable in a lawsuit for the deaths of Simpson and Goldman, whose estates he owed $33.5 million.

In 2007, Simpson and a group of other men, two of them carrying guns, went to the Las Vegas hotel room of a sports memorabilia dealer and took hundreds of items from him. Simpson said he was merely reclaiming property that had been stolen from him, but he was convicted in 2008 of robbery, kidnapping and other charges.

He received a prison sentence of nine to 33 years. He served the minimum.