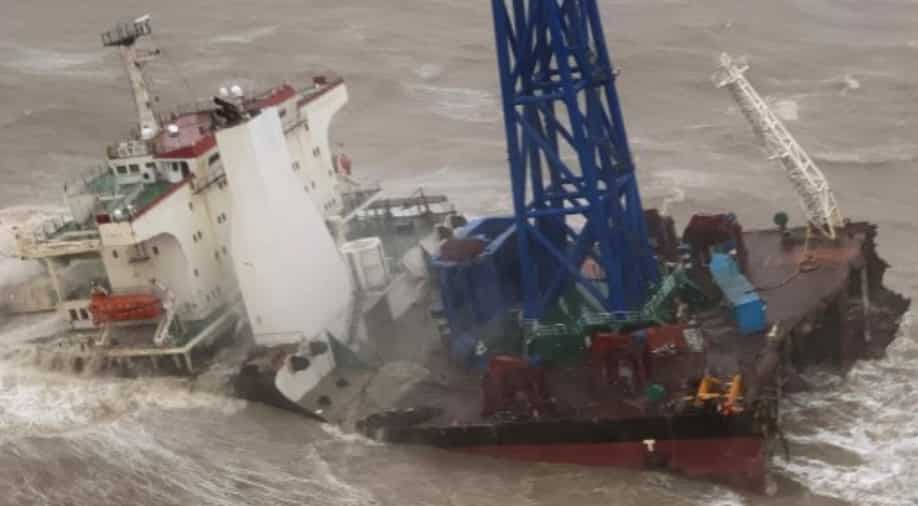 This handout file photo taken and released by the Hong Kong Government Flying Service on July 2, 2022 shows a ship after it broke into two amid Typhoon Chaba. Photograph:( AFP )

Typhoon Chaba: Search and rescue operations are underway as rescuers have expanded the scope of their search around the point of the wreckage

Chinese authorities said on Monday (July 4) that they found 12 bodies after a devasting shipwreck in the South China Sea. The bodies were recovered from waters southwest of Hong Kong after an engineering vessel broke into two pieces as tropical storm Chaba passed through over the weekend.

As quoted by news agency AFP, Guangdong Maritime Search and Rescue Centre said: "As of 3:30 pm on July 4, rescue forces found and recovered 12 bodies, suspected to be of victims who drowned, in an area around 50 nautical miles southwest of the site where the vessel sank." It added, "The relevant departments are stepping up identity confirmation work."

The news agencies have also reported that the maritime authorities of the southern province of Guangdong are in the process of identifying the bodies, suspected to have drowned. The 12 bodies were retrieved about 50 nautical miles from where the stricken ship sank.

The tragic incident happened over the weekend when the vessel, 'Fujing 001', was at an anti-typhoon anchorage in waters near Yangjiang in Guangdong when its anchor chain snapped. It snapped into two after suffering substantial damage and sank. The vessel had a crew of 30.

According to Chinese state media, three people were rescued on Saturday and one more in the early hours of Monday.

CCTV said that the rescuers have expanded the scope of their search around the point of wreckage. Medical workers are present on each rescue ship to provide assistance to any crew member found as soon as possible.