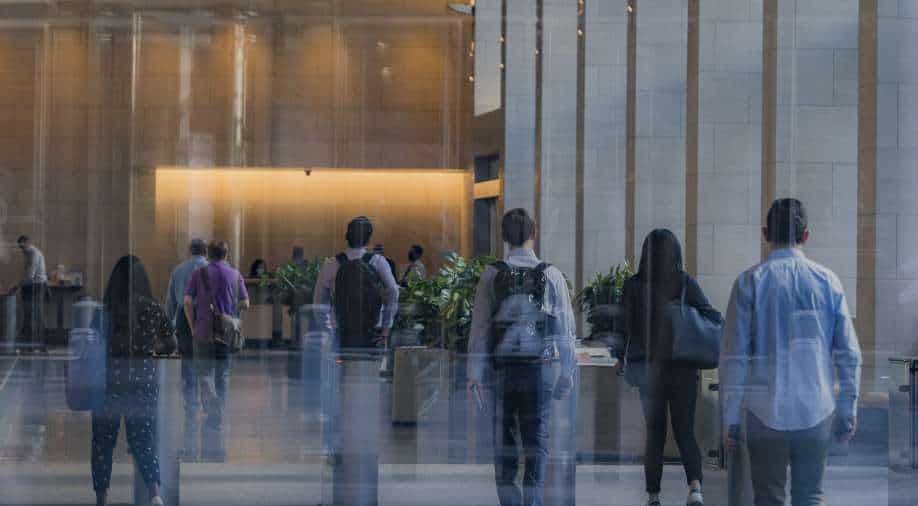 A year on, the threat of Covid remains Photograph:( The New York Times )

Office workers this week watched as events unfolded that were at once familiar and jarring in their persistence: COVID case counts ballooned, and employer plans deflated

It was three words that workers don’t hear every day from their bosses: “I was wrong.”

Morgan Stanley’s CEO, James Gorman, asked this week about employees returning to the office, said his projection about the pandemic subsiding was off. “I thought we would have been out of it past Labor Day,” Gorman said on CNBC. “And we’re not.”

Office workers this week watched as events unfolded that were at once familiar and jarring in their persistence: COVID case counts ballooned, and employer plans deflated. The United States is reporting an average of more than 120,000 new COVID cases each day, up 40% from two weeks ago, according to a New York Times database. New York City is experiencing a spike in cases larger than any since last winter. Employers that had been growing bolder in their plans — reopening offices, mandating or strongly suggesting that workers report back, promising holiday blowouts — are now scaling back their ambitions for in-person business and socializing.

Jefferies, an investment bank, asked its 4,542 employees to work from home because of a spate of COVID cases. Goldman Sachs told its teams to postpone their remaining holiday parties, and JPMorgan Chase announced that its health care conference would go virtual. Citigroup, which had called people back two days a week starting in September, sent a memo giving its New York and New Jersey staff the option to work remotely, while Morgan Stanley employees were given more flexibility to stay home. And Apple delayed its office return indefinitely, the latest in a slew of employers that have conceded their corporate timelines are no match for the unpredictability of the virus.

“Since the start of December, Jefferies has experienced nearly 40 new COVID cases,” the CEO, Rich Handler, and president, Brian Friedman, wrote in a memo to staff last week, in which the bank also required that anyone eligible who enters its offices or attends its events get a booster shot by the end of January. “Our priority now is to best protect every one of you and your families.”

For months, the finance industry had been confident in the value, and relative safety, of in-person work. In October, an average of 27% of finance workers went to the office every day in New York City, and that figure was expected to rise to 47% by the end of January, according to the Partnership for New York City, a business group. But now some financial firms are beginning to backtrack.

“Despite all best efforts, COVID is really forcing a rollback of plans,” said Kathryn Wylde, head of the partnership. “The contagion factor with omicron has meant that people are going to hunker down again.”

Fidelity Investments, which has 52,000 employees globally, this week paused its pilot program allowing vaccinated workers to come back to their desks in some parts of the United States. Though workers deemed essential will still report to the office, other associates have been asked to work from home.

Companies forging ahead on in-person work face the question of whether to require booster shots, as the need for extra protection against the omicron variant becomes increasingly clear. The Washington Post, which is bringing its employees back to the office by mid-February, told staff members they will have to get boosters and submit to weekly testing. Few other private employers have come out publicly on the issue, though the Metropolitan Opera, the National Football League and several universities have put in place some form of booster requirement.

“What we’ve been seeing from our customers is uncertainty: Do we mandate boosters, do we not mandate boosters?” said Benjamin Granger, an organizational psychologist at the software company Qualtrics who advises hundreds of clients on how to use the platform. “When we see the first domino fall, I think we’ll see a cascade of them coming.”

As employers weigh vaccine guidelines and adjust their office returns, they also face a more immediate challenge: How will they celebrate the holidays as omicron spreads? After a year of email and Slack correspondence, corporate teams had been eagerly anticipating holiday parties. But as New York City’s new COVID cases rose significantly after party invitations went out, dozens of companies scrambled to cancel their plans.

Vincent Chee, head of people and culture at Bevel, a communications consultancy with 30 employees, had started making arrangements for the company’s holiday celebration in late September: It would involve a scavenger hunt, a make-your-own-snow-globe session and hot cocoa. Last week, when an employee tested positive for the virus, the company shifted to virtual celebrations.

“We’re going back to basics,” Chee said, describing his plans for online yoga and meals that employees can expense on food delivery websites like Seamless.

Meanwhile, employers that held holiday parties right as cases were exploding are trying to help their workers manage the aftermath: BuzzFeed, which hosted a party last week in Manhattan, said attendees reported positive test results to the company’s in-house public health researcher, and close contacts were encouraged to get tested.

Some company leaders came under fire for taking a middle-of-the-road approach to party cancellations. Peloton decided not to host a holiday party because of COVID concerns, budgetary considerations and space constraints, according to the company. But then the CEO and his wife held their own celebration at the Plaza Hotel, which some Peloton employees attended.

“John and Jill Foley hosted a personal holiday party for their friends and family, some of whom were Peloton team members,” a company official said in an email. “This was not a Peloton-paid or -sponsored event.”

Some people whose companies have pressed ahead with holiday festivities are left wondering whether to assume the risk of gathering with co-workers. Emily Crebbin, 24, who works for a global technology company, said she felt a sense of unease toggling between Twitter and TikTok posts about the rapid spread of omicron in New York City while she planned an outfit for her employer’s holiday party Friday.

She joined the company in July and was excited to spend time with colleagues, enjoying the open bar and passed appetizers — but the gloom in her social media feeds has transported her back to the city’s atmosphere in March 2020.

“It was so exciting that we were going to have a holiday party, because last year we couldn’t and it was like, ‘Yay New York is back and everyone is vaccinated,’” she said. “But I kind of wish they’d cancel, because then I wouldn’t have to make the call.”

Even as office workers returned home and universities moved classes online, an elite group of politicians and executives held firm on plans for its annual conclave in the Swiss Alps. The organizers of the World Economic Forum, which brings together political leaders and CEOs, said they were still planning on hosting the annual meeting in Davos next month. So far, there have not been many cancellations, and preparations for the event — which attracts thousands for a week of lectures, panel discussions, meals and parties — had begun, according to Peter Vanham, a spokesperson for the organization.

But Vanham added that the World Economic Forum was watching the virus closely and expected to make a final decision about whether to proceed or cancel the event by Jan. 6.

“The X-factor is omicron,” he said. “We will know just how bad that X-factor is by the end of the year.”