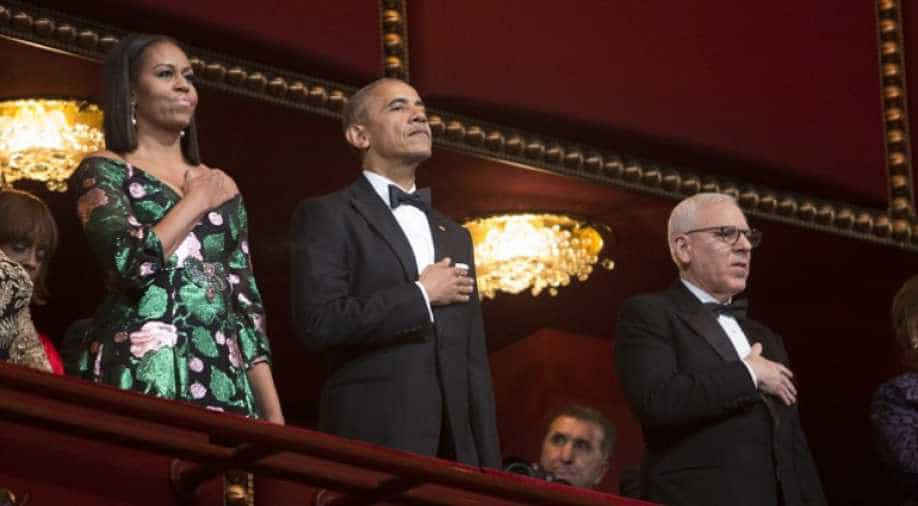 The Obamas' seasonal greeting comes at a time when America is deeply divided after a brutal presidential campaign. Photograph:( AFP )

"The idea that we are our brother's keeper and our sister's keeper. That we should treat others as we would want to be treated," Michelle Obama said.

"Those are values that help guide not just my family's Christian faith, but that of Jewish Americans, and Muslim Americans; nonbelievers and Americans of all backgrounds," the president added.

The Obamas' seasonal greeting comes at a time when America is deeply divided after a brutal presidential campaign that pitched populist Donald Trump and his frequently incendiary rhetoric against Hillary Clinton.

The Obamas appeared jovial in their greeting, showing a flashback to the filming of their first Christmas message in 2009, when the president couldn't stop giggling.

Barack Obama also used the address to re-cap his time in office, saying the country was much stronger than it had been than when he succeeded George W Bush.

"Together, we fought our way back from the worst recession in 80 years, and got unemployment to a nine-year low," he said.

"We made America more respected around the world, took on the mantle of leadership in the fight to protect this planet for our kids, and much, much more."

As is custom, the couple also thanked US troops and their families.