Oakland fire: Up to 40 feared dead as fire tears through warehouse party 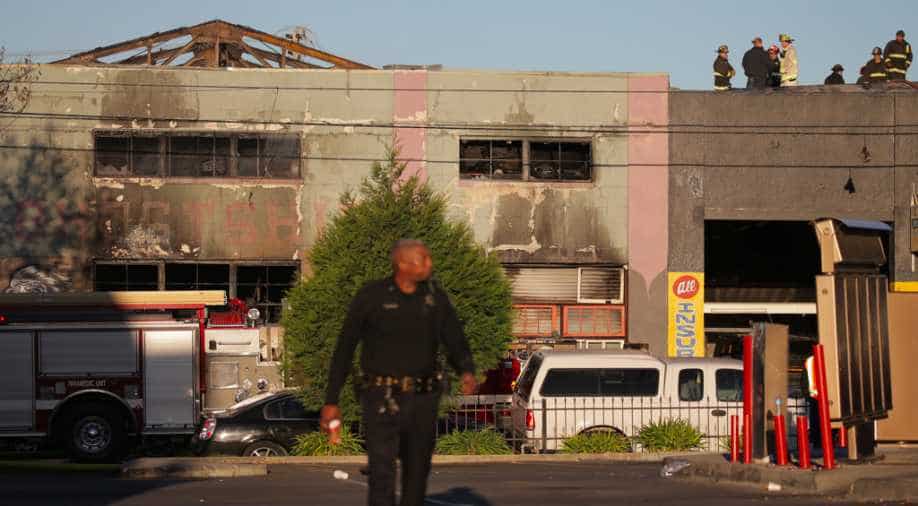 Firefighters and police at the scene of the overnight fire. Photograph:( Getty )

Up to 40 people are feared dead in a huge fire that tore through a party in a warehouse near San Francisco, authorities said. The toll rose to 24 on Sunday, AFP quoted police as saying.

Oakland fire chief Teresa Deloach Reed told reporters that most of those who died in the blaze, that started about 11:30 pm local time on Friday, were thought to have died on the upper floor of the two-storey warehouse known as Oakland Ghostship.

"It must have been a very fast-moving fire," she said.

An estimated 50 to 100 people were in the building attending an electronic dance music party. The cause of the fire is not yet known.

Fire crews had not been able to fully sweep the scene by mid-Saturday and officials were bracing for more casualties once rescuers entered the building.

"We are prepared for several dozen fatalities," Sergeant Ray Kelly, of the Alameda County Sheriff’s department, told reporters. "We are prepared to deal with 30, 40 deceased people."

According to Kelly, some of the missing are from overseas, making it difficult to identify the victims. Most of the people attending the party were in their 20s and 30s.

The warehouse housed an artist collective with numerous partitions that were added and a makeshift stairwell built from pallets.

Some of the structural changes made it extremely difficult for people to escape, Reed said.

"There wasn’t a real entry or exit path," she said. "I don’t know where the fire started, but I do know that the way the building was situated made it difficult for people to escape."

Firefighters were hampered in their efforts to put out the blaze by clutter, news agency AFP reports.

"It was filled end to end with furniture, whatnot, collections," Reed said. "It was like a maze almost."

She said that it apparently no smoke detectors were activated in the building, which had no sprinkler system. The inferno raced through the structure quickly and got out of control at one point, forcing firefighters to pull back.

"I literally felt my skin peeling and my lungs being suffocated by smoke," Bob Mule, a photographer who lives in the building, told Fox television affiliate KTVU. "I couldn’t get the fire extinguisher to work."

Video footage posted by the fire department overnight showed orange flames shooting into the sky from the roof and flaring out of the large windows.

Drones equipped with thermal imaging capabilities would be flown at the scene to detect "hot spots" that might still be burning inside the building.