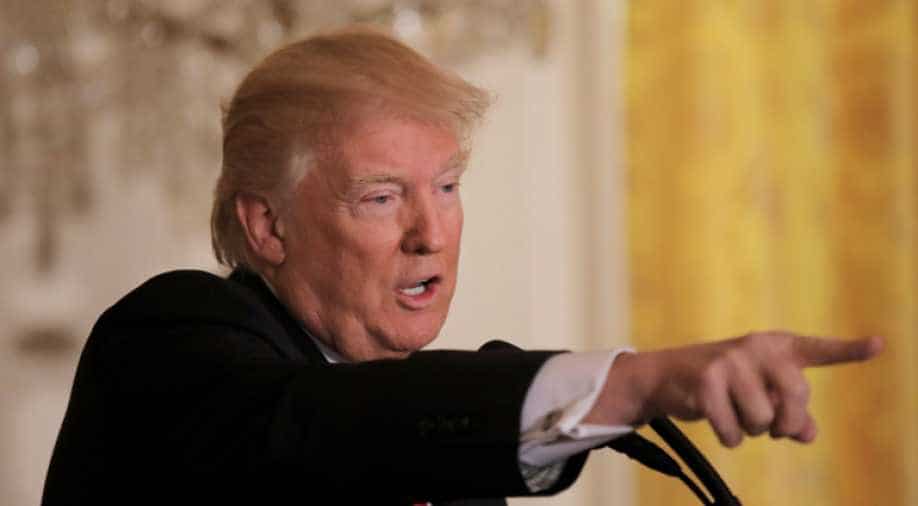 In a news conference on Thursday, Trump said his rollout of the travel ban was 'very smooth' but the administration got a bad court decision. Photograph:( Reuters )

It said the other nations being considered for new rules were Belarus, Eritrea, Kyrgyzstan, Myanmar, Sudan and Tanzania.

US President Donald Trump said Wednesday his administration was preparing to add a "couple of countries" to the controversial list of states whose citizens are subject to travel bans or severe restrictions on entry to the United States.

"We are adding a couple of countries to it. We have to be safe. Our country has to be safe," he said at the World Economic Forum in Davos, adding that the names of the new countries would be announced "very shortly".

The Wall Street Journal reported earlier that the administration planned to add seven countries including Nigeria, Africa's most populous country, and others in Africa and Asia.

It said the other nations being considered for new rules were Belarus, Eritrea, Kyrgyzstan, Myanmar, Sudan and Tanzania.

These countries would not necessarily face blanket bans on US travel but could see certain types of visas curtailed, the paper said, quoting administration officials.

Some of these countries could see their nationals barred from participating in a visa lottery programme, which Trump has repeatedly railed against, saying he would prefer a skilled immigration policy along the lines of the systems in Canada or Australia.

Unlike the nations covered by the current ban, most of these new additions do not have Muslim-majority populations.

The paper added that administration officials were still debating whether to include one or two of the countries, and the new list would be announced on Monday.

- Broad powers -
Trump repeatedly promised during his election campaign to implement a complete ban on Muslims entering the US, and announced his first package of travel bans and restrictions shortly after taking office in January 2017.

The move outraged critics and was struck down by a federal court which ruled it amounted to religious discrimination. The administration moved a second version of the policy in March 2017, which was struck down again for similar reasons.

But the third version of the policy was upheld by the US Supreme Court in June 2018 in a 5-4 ruling that affirmed the president had broad power to set immigration policy based on national security justifications.

The countries currently covered are Iran, Libya, Somalia, Syria, Yemen and North Korea, and political officials from Venezuela. The administration argued the inclusion of non-Muslim majority countries proved the policy was not driven by religious animus.

Speaking to reporters in Jamaica, where he is on a regional tour, Secretary of State Mike Pompeo said it was the administration’s policy "to make sure that we are getting security right, to make sure that we work with every country to have processes in place" that ensured the security of the US.

The Journal's reporting, including the naming of seven new countries, ties in with earlier reporting by US media, including BuzzFeed News which said earlier this month it had obtained a draft presidential proclamation about the expansion, but names of the countries were left blank.