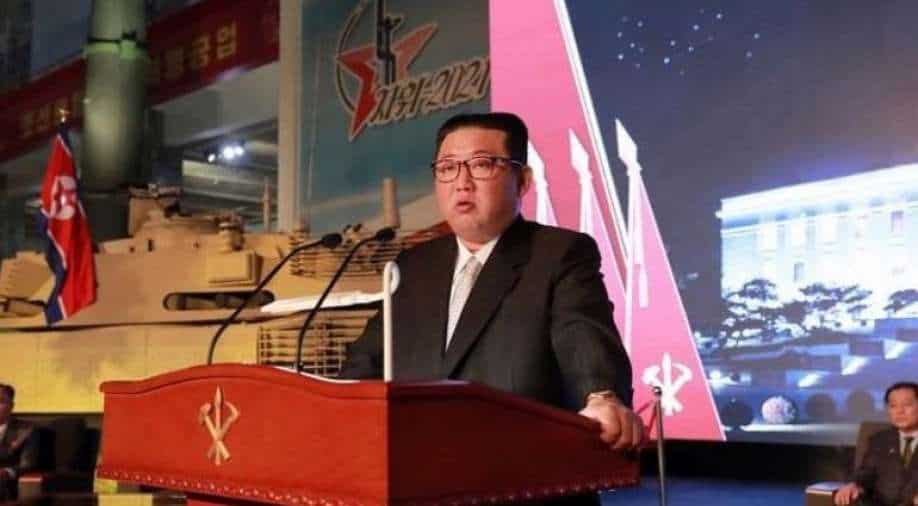 North Korean leader Kim Jong Un said the US is the "root cause" of instability on the Korean Peninsula. He said Pyongyang is only increasing its military capabilities as a deterrent.

On Tuesday, North Korean leader Kim Jong Un criticised the US for hostile actions and stated that his country is beefing up its military capabilities to preserve national sovereignty.

Kim accused the US of being the "root cause" of the Korean Peninsula's instability.

He stated that there is no reason to assume that Washington's attitude toward Pyongyang is anything other than "hostile."

"We are not discussing war with anyone, but rather to prevent war itself and to literally increase war deterrence for the protection of national sovereignty," he said at a defense exhibition amid reports that the country recently tested a hypersonic missile.

While US President Joe Biden's administration has maintained that the US has no hostile intentions toward the country, Kim stated at the Defense Development Exhibition, "I am extremely interested if there are individuals or countries who believe that."

Kim made his latest remarks while standing in front of a variety of weapons, including a Hwasong-16 intercontinental ballistic missile (ICBM), according to photos published in a local newspaper.

The Hwasong-16, North Korea's biggest intercontinental ballistic missile, was presented during a military parade late last year but has yet to be tested.

As the weapons race heats up, both Koreas have begun testing increasingly sophisticated short-range ballistic missiles and other weaponry.

The North has continued to advance its missile programme, with some speculating that it has launched a significant expansion of its primary nuclear reactor.

This may then be used to create fuel for nuclear weapons.

South Korea, on the other hand, has successfully tested its first submarine-launched ballistic missile.

It also intends to construct new weaponry, like as aircraft carriers, and has bought F-35 stealth fighters from its American friends.

The US has also stationed around 28,500 troops in South Korea to deter any North Korean attack.

Washington and Seoul have conducted joint military drills as recently as August, a move denounced by Kim's North as preparations for war.

In 2018, at the headline-grabbing Singapore summit, Kim became the first North Korean leader to meet a sitting US president.

However, the negotiations process has essentially stalled since a second summit in Hanoi the following year failed over sanctions relief and what Pyongyang is ready to give up in exchange.

In its attempts to achieve denuclearisation, the Biden administration has stated that it is prepared to meet with North Korean officials at any time or location, with no preconditions.

Washington and Seoul are security allies, with Washington stationing approximately 28,500 troops in the South to defend it from its neighbour, which invaded in 1950.

Despite the fact that the US has stated that it is open to have diplomatic discussions with North Korea at any moment, the process has come to a halt.

Pyongyang has stated that it will not engage in negotiations unless sanctions are lifted and Washington stops its military operations in South Korea.