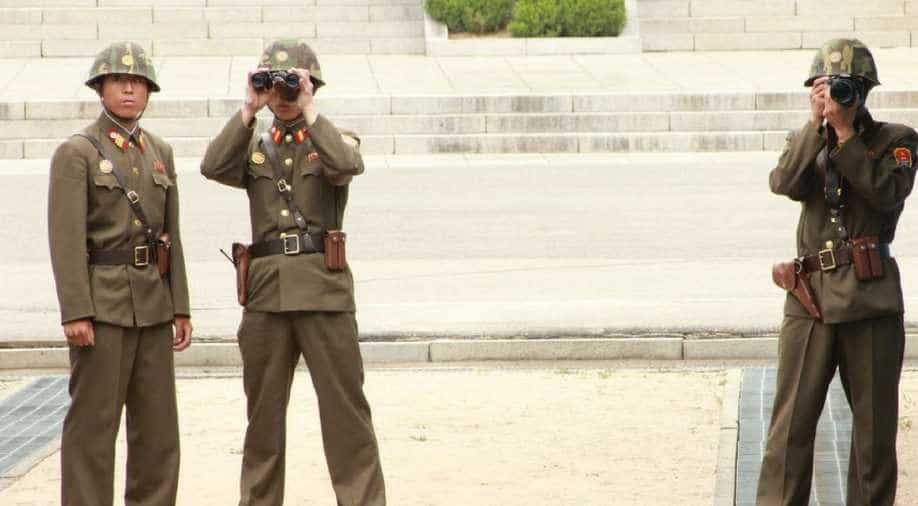 'Our military has taken in a North Korean soldier after he crossed from a North Korea post towards our Freedom House,' Seoul's Joint Chiefs of Staff (JCS) said in a statement, referring to a building on the South side of the village.? Photograph:( Reuters )

A North Korean soldier was shot and injured by his own side Monday while defecting to South Korea at the border truce village of Panmunjom, the South's military said.

The soldier, thought to be low ranking, was shot in the shoulder and elbow and was picked up bleeding on the South side of a portion of the border known as the Joint Security Area (JSA).

It is rare for the North's troops to defect at the truce village, a major tourist attraction bisected by the borderline and the only part of the frontier where forces from the two sides come face-to-face.

"Our military has taken in a North Korean soldier after he crossed from a North Korea post towards our Freedom House," Seoul's Joint Chiefs of Staff (JCS) said in a statement, referring to a building on the South side of the village.

A JCS official quoted by Yonhap news agency said the South's soldiers heard a gunshot and then retrieved the unarmed soldier in the mid-afternoon.

He was evacuated to a private hospital by a UN helicopter, the official added, saying the solider had regained consciousness but declining to comment on whether his injuries were life-threatening.

No personal details have been released but the soldier's uniform suggested he was low-ranking, Yonhap said.

No tourists were in the Joint Security Area at the time because tours do not run on Mondays, a spokesman for United States Forces Korea, which approves the visits, said.

There was no exchange of gunfire between the two sides, but the South's military said it has raised its level of alertness against any North Korean provocations.

Also on Monday, South Korean police arrested an American for entering a restricted zone -- in a separate border area -- with the apparent intention of crossing to the North, Yonhap reported.

The man, identified only as a 58-year-old from Louisiana, had arrived in South Korea last week and wanted to enter the North for "political purposes", but was reported by a local villager, Yonhap said.

He is currently under questioning by the South's police, army and spy agency.

- Tense relations -
Relations on the peninsula have been tense for months as the North has stepped up its missile tests. In September, it carried out its sixth and largest nuclear test -- of what it described as "a hydrogen bomb".

Military officials from the North and South have used Panmunjom frequently in the past for talks. Unlike the rest of the frontier, Panmunjom is not fortified with minefields and barbed wire and the border is marked only by a low concrete divider.

Dozens of North Korean soldiers have fled to the South through the DMZ over the decades since the peninsula was divided, including two soldiers who crossed the frontier in June.

More than 30,000 North Korean civilians have also fled their homeland since the two nations came into being in 1948, but it is rare for civilians to cross the closely guarded border.

Most flee across the North's porous frontier with China and then move on to a third country to seek passage to South Korea.