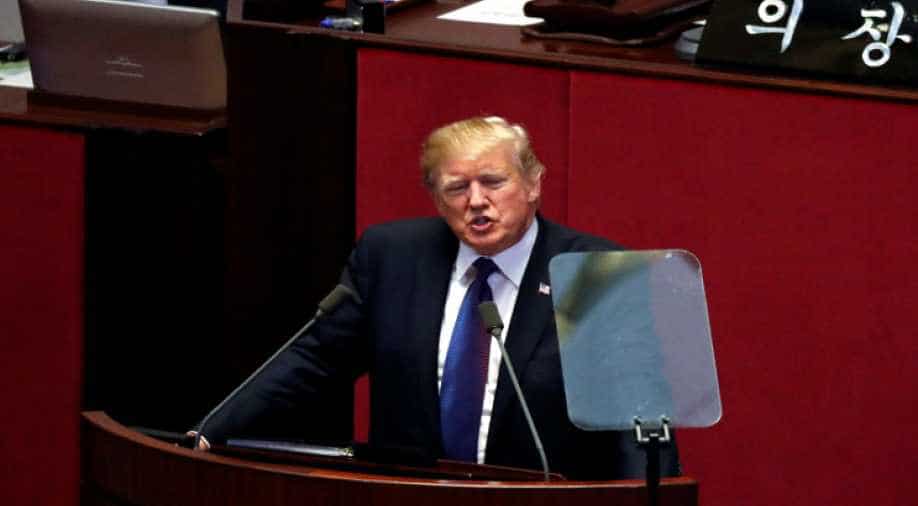 The US leader's tone in Seoul, just an hour from the DMZ and a city whose 10 million inhabitants would find themselves on the frontline of any conflict, has been in marked contrast to his previous warnings of 'fire and fury'.

Donald Trump slammed North Korea's "cruel dictatorship" and the severe political oppression inflicted on its people in a speech to Seoul's parliament on Wednesday.

South Korean lawmakers applauded as the US president, whose tour of Asia has been dominated by fears over the nuclear-armed North, vowed not to be intimidated and warned Pyongyang that it should not test American resolve.

He called for global solidarity against the isolated nation, but he also offered leader Kim Jong-Un a possible "path towards a much better future".

"Far from valuing its people as equal citizens, this cruel dictatorship measures them, scores them, and ranks them based on the most arbitrary indication of their allegiance to the state," Trump said in the address.

The North, which this year carried out its sixth nuclear test, generating by far the largest yield to date, has also fired dozens of missiles in recent months.

Two have overflown key US ally Japan, and the regime has claimed that it now has the technology to mount a nuclear warhead on a missile that can travel as far as the US mainland.

We will not "allow American cities to be threatened with destruction," he said in Seoul.

"America does not seek conflict or confrontation, but we will never run from it.

"We will not permit America or our allies to be blackmailed or attacked," he added.

The mercurial US president, who earlier Wednesday aborted a visit to the Demilitarised Zone (DMZ) that separates the two Koreas, heads later in the day to China, Pyongyang's sole major diplomatic ally and protector.

Ahead of his meeting with Chinese President Xi Jinping, Trump said the world had to unite to counter the threat from North Korea.

"All responsible nations must join forces to isolate the brutal regime of North Korea," he said.

'A much better future'

While the speech was heavy on Trump's usual anti-North Korean bombast, he also offered an olive branch, in what he said was a direct message to the country's young leader.

"The weapons you are acquiring are not making you safer," he said. "They are putting your regime in great danger.

"Yet despite every crime, you have committed against God and man, we will offer a path towards a much better future."

The US leader's tone in Seoul, just an hour from the DMZ and a city whose 10 million inhabitants would find themselves on the frontline of any conflict, has been in marked contrast to his previous warnings of "fire and fury".

"Ultimately, it will all work out," he said on Tuesday. "It always works out. It has to work out."

Even so, the North's Rodong Sinmun newspaper, the mouthpiece of the ruling Workers' Party, condemned his visit Wednesday.

In an article published before his parliamentary address, the paper called the trip "a deliberate scheme aimed at strengthening military threats against us and to light the fuse of nuclear war".

"War maniac Trump is pushing tensions to the extreme by spewing threats of war against us," it said in an editorial.