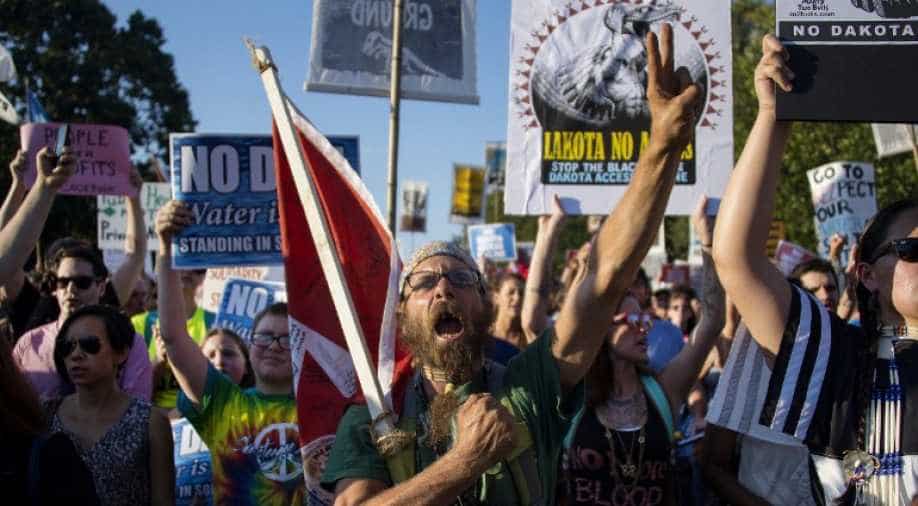 On Monday more than 4,600 people used the location tagging feature on the social media site to confuse police. Photograph:( AFP )

Thousands of people "checked in" at the Standing Rock Indian Reservation on Facebook to support the activists fighting construction of an oil pipeline in North Dakota on Monday.

On Monday more than 4,600 people used the location tagging feature on the social media site to confuse police who they believe are using the social network to track the protesters. The Reservation is near the site of the $3.8 billion Dakota Access pipeline. The Facebook "check in" boosted the number of people actually present.

The local sheriff's department refused they were using social media to locate the demonstrators in a Facebook post.

The pipeline threatens sacred sites and local water supplies, say the Sioux Tribe and other objectors. They suggest that transporting oil by road or rail would be safer and more cost-effective. The 1,172-mile (1,885-km) pipeline is being built by a group of companies led by Energy Transfer Partners LP, Reuters reports.

Most of the check-ins at the site were made remotely. The cell phone reception is actually poor at the protest camp in rural southwestern North Dakota. People walk up a small mound dubbed "Facebook Hill" to get a signal.

"It is a lot of people showing their support for Standing Rock," Horinek said on Monday by telephone from North Dakota, reported Reuters. "They can't be with us here physically, but they are with us in spirit and prayer."

The police have arrested more than 400 protesters in demonstrations against the pipeline since Agust 10. The movement has attracted support from celebrities as Mark Ruffalo, Shailene Woodley, and Chris Hemsworth. Horinek was among the 142 protesters arrested by police last week at an encampment set up on private land, Reuters said.

There were also demonstrations at banks linked to the pipeline's financing on Monday.

Environmental activists and protesters have been carrying out protests since April, which even prompted the US government to halt construction of the pipeline in September.