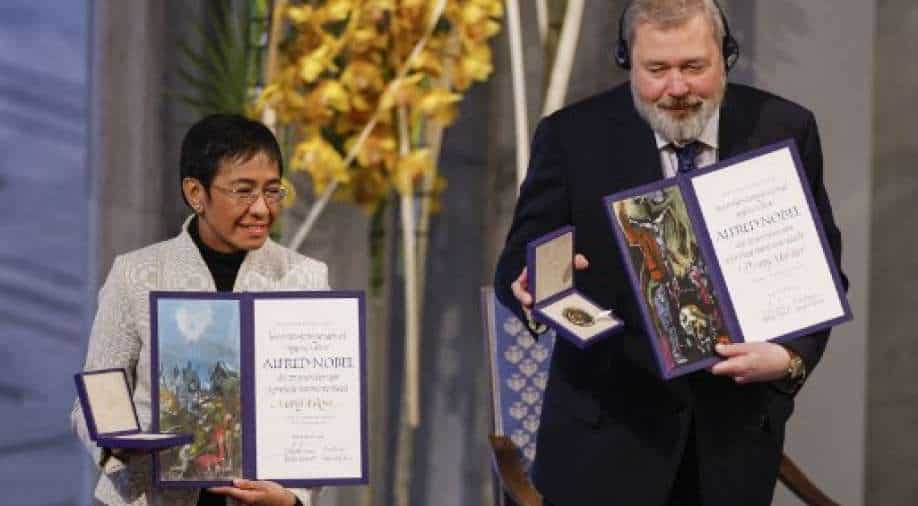 Journalists Maria Ressa and Dmitry Muratov won the 2021 Nobel Peace Prize for their separate fights for freedom of expression in countries where reporters have faced persistent attacks, harassment and killings

Filipina journalist Maria Ressa, while accepting her Nobel Peace Prize, launched a tirade against US social media giants holding them responsible for fuelling a flood of “toxic sludge” in the social platform.

Without naming “American internet companies” such as Facebook and Twitter, the 58-year-old said that they are “making more money by spreading hate and triggering the worst in us.”

“With its god-like power, their technology has allowed a virus of lies to infect each of us, pitting us against each other, bringing out our fears, anger and hate, and setting the stage for the rise of authoritarians and dictators around the world,” she said to a scaled-down audience to due to pandemic at Oslo’s City Hall.

“Our greatest need today is to transform that hate and violence, the toxic sludge that’s coursing through our information ecosystem, prioritised by American internet companies that make more money by spreading that hate and triggering the worst in us,” Ressa, the co-founder of news website Rappler, said.

Ressa highlighted the importance of reliable facts at a time when the world is battling the COVID-19 pandemic or facing upcoming elections in countries like France, the United States, the Philippines and Hungary.

Ressa, a vocal critic of Filipino President Rodrigo Duterte and his deadly drug war, is herself facing seven criminal lawsuits in her country, which she said could see her sent to prison for 100 years.

Currently on bail pending an appeal against a conviction last year in a cyber libel case, she had to apply to four courts for permission to travel to Norway for Friday’s ceremony.

Her co-laureate Dmitry Muratov, the editor-in-chief of Novaya Gazeta, meanwhile called for a minute of silence during the Nobel ceremony to honour all journalists killed in the line of duty.

Novaya Gazeta is one of the rare independent newspapers in a Russian media landscape largely under state control, reports news agency AFP.

Known for its investigations into corruption and human rights abuses in Chechnya, Novaya Gazeta has seen six of its journalists killed since the 1990s, including famed investigative reporter Anna Politkovskaya, murdered in 2006.

The Norwegian Nobel Committee awarded them the 2021 Nobel Peace Prize for their separate fights for freedom of expression in countries where reporters have faced persistent attacks, harassment and killings.