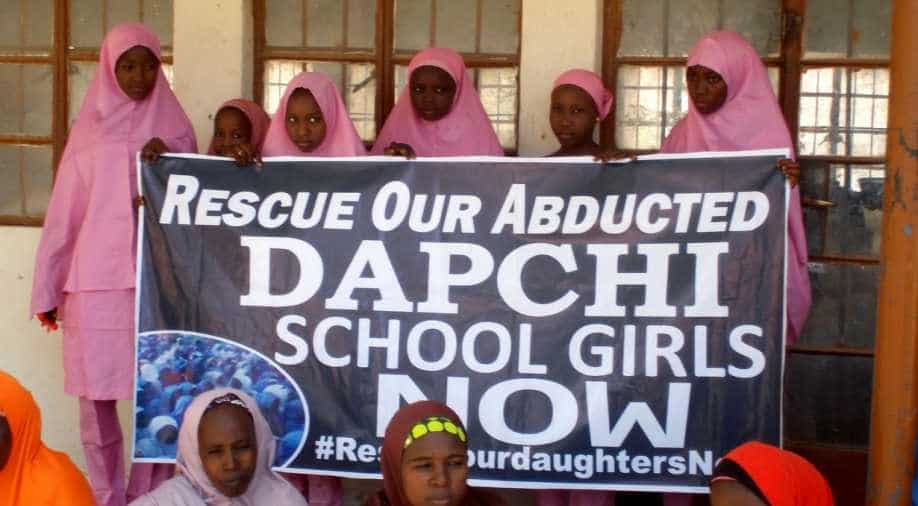 Schoolgirls wait for the arrival of Nigeria's President Muhammadu Buhari at the Government girls' science and technical college in Dapchi. Photograph:( Reuters )

No ransom was paid for the release of scores of Nigerian schoolgirls by Islamist militants on Wednesday, Nigeria's information minister said.

"No ransom was paid to them to effect this release. The only condition they gave us is not to release (the girls) to the military but release them in the town of Dapchi without the military presence," Information Minister Lai Mohammed told Reuters in Abuja.

Boko Haram insurgents freed the students in the northeastern town of Dapchi, from where 110 girls were taken on February 19 in the biggest mass abduction since Chibok in 2014, witnesses told.

Some of the released students said five of their friends had died in captivity and another was still being held.

The fighters from the Boko Haram group, some of them shouting `God is greatest`, drove the girls back into the northeast town of Dapchi in a line of trucks in the morning, dropped them off then left, witnesses told.

"Five among us taken away were dead. One is still with them because she is a Christian," one of the freed girls, Khadija Grema, told.

Dapchi resident Muhammad Bursari said his niece Hadiza Muhammed, another of the freed girls, told him the remaining student was still in captivity because she had refused to convert to Islam.

Witnesses said more than 100 of the 110 girls seized in Dapchi on February 19 were returned, though the government issued a statement saying 76 girls had been freed in an "ongoing process".

Nigeria had secured the release "through back-channel efforts and with the help of some friends of the country," Lai Mohammed, minister of information, said in a statement, without elaborating.

"For the release to work, the government had a clear understanding that violence and confrontation would not be the way out as it could endanger the lives of the girls, hence a non-violent approach was the preferred option," he said.

The kidnapping of the girls aged 11-19 was the biggest mass abduction since Boko Haram took more than 270 schoolgirls from the town of Chibok in 2014 - a case that triggered international outrage.

There were no immediate details from the government or from Boko Haram on why the girls were taken. Commentators feared the Dapchi girls had been taken for ransom after Boko Haram received millions of euros for the release of some of the Chibok girls last year.

The Dapchi abduction has piled pressure on President Muhammadu Buhari, who came to power in 2015 promising to crack down on Boko Haram`s nine-year-old insurgency and could face the voters again next year.

Mohammed Dala said he had found his 12-year-old daughter in a crowd of the girls in the centre of town.

"Some motors painted in military colour came with our girls," he told. "They (the militants) ... said we should not flee. They dropped the girls at the centre of town, near Ali`s tea shop. I found my daughter and left."

Most of the other girls were taken to a hospital guarded by the military, witnesses said.