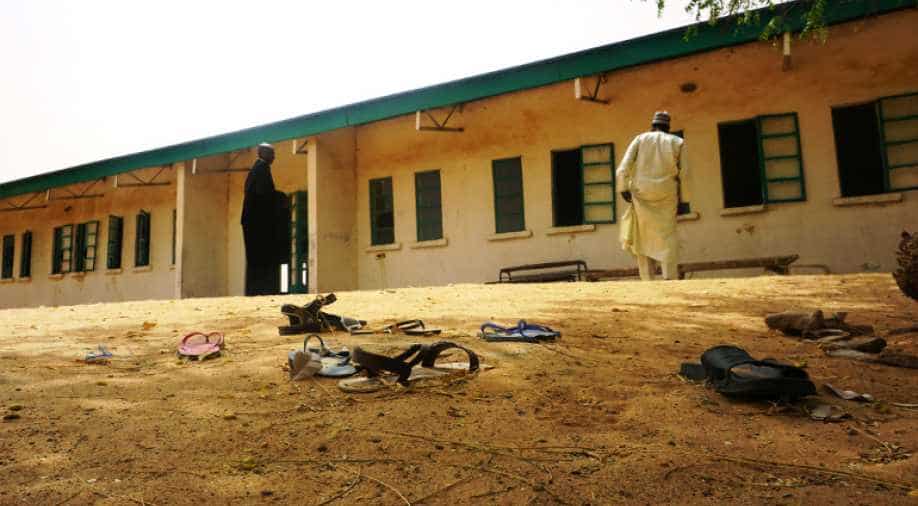 Sandals are strewn in the yard of the Government Girls Science and Technical College staff quarters in Dapchi, Nigeria. Photograph:( AFP )

The Nigerian government on Sunday confirmed that 110 girls were missing after a Boko Haram school attack in the northeast, following days of silence on the children's fate.

"The Federal Government has confirmed that 110 students of the Government Science and Technical College in Dapchi, Yobe State, are so far unaccounted for, after insurgents believed to be from a faction of Boko Haram invaded their school on Monday", the information ministry said in a statement.

The statement came after authorities were unable to account for 110 of the school's 906 students, the ministry said.

The kidnapping has raised questions about the military's repeated claims that the Islamist militants are on the verge of defeat, after nearly nine years of bitter fighting.

It has also revived memories of the 2014 mass abduction of more than 200 schoolgirls from Chibok that shook the world.

The authorities initially denied that any student had been kidnapped.

On Friday, President Muhammadu Buhari apologised to the girls' families, saying: "This is a national disaster. We are sorry that this could have happened."Former military ruler Buhari was elected in

2015 on a promise to defeat Boko Haram, after the jihadists grew in strength under his predecessor, Goodluck Jonathan.

Jonathan was lambasted for his tardy response to the Chibok abduction, which saw 276 girls from the town in Borno state taken in the dead of night.

In his first expanded comments on Dapchi, Buhari said: "This is a national disaster. We are sorry that this could have happened."

A teacher at the school, Amsani Alilawan, said there were soldiers in Dapchi until last month but they were then redeployed.

"One month back, they carry (take away) all soldiers, they transferred them to another side, they leave us without security," he said.

Enraged relatives of the missing girls this week tried to surround the convoy of the state mayor of Yobe, only to be pushed back by the security forces.

The kidnapping is the worst jihadist assault to have hit Nigeria since Buhari came to power.

Schools, particularly those with a secular curriculum, have been targeted by Boko Haram, whose name roughly translates from Hausa as "Western education is forbidden".

Boko Haram's quest to establish a hardline Islamic state in northeast Nigeria has left at least 20,000 dead and made more than 2.6 million others homeless since 2009.

The jihadists have increasingly turned to kidnapping for ransom as a way to finance their operations and win back key commanders in prisoner swaps with the Nigerian government.