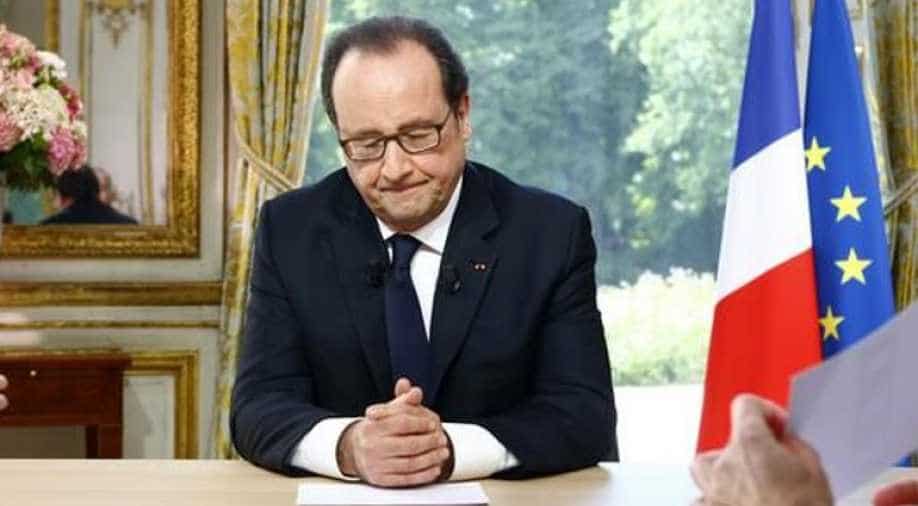 There was a sense of deja vu in France as the visibly moved President took to the airwaves to address a nation once again in mourning. Photograph:( Reuters )

Follow Us
French President Francois Hollande said Thursday's lethal attack on the southern city of Nice was clearly a terrorist assault and that the state of emergency imposed since since jihadists killed 130 in Paris on November 13, 2015 would be extended for another three months.

Speaking after an emergency meeting in the early hours of Friday morning, Hollande said at least 77 people were killed in an attack in which the assailant drove a big truck at high speed into dense crowds who were watching a fireworks display on the country's national Bastille Day holiday.

"There's no denying the terrorist nature of this attack of yet again the most extreme form of violence," the French leader said in a national television address at 4am (0200 GMT), about five or six hours after the carnage in Nice. There was a sense of deja vu in France as the visibly moved President took to the airwaves to address a nation once again in mourning.

As an act of terror, the incident will be the third major attack on French soil in 18 months - with several smaller-scale jihadist killings also having taken place.

No group has claimed responsibility for the attack yet.

President Francois Hollande had called on reservists to boost the ranks of police and gendarmes after the attack.

France's "operational reservists" include French citizens with or without military experience as well as former soldiers. Hollande said they would in particular be used to boost "border controls".

'France will strengthen role in Iraq and Syria'

Hollande also vowed to strengthen his country's role in the fight against the Islamic State group in Iraq and Syria after a deadly attack on Nice, which has not been claimed by any group.

"Nothing will make us yield in our will to fight terrorism. We will further strengthen our actions in Iraq and in Syria. We will continue striking those who attack us on our own soil," he said, in reference to the Islamic State group.