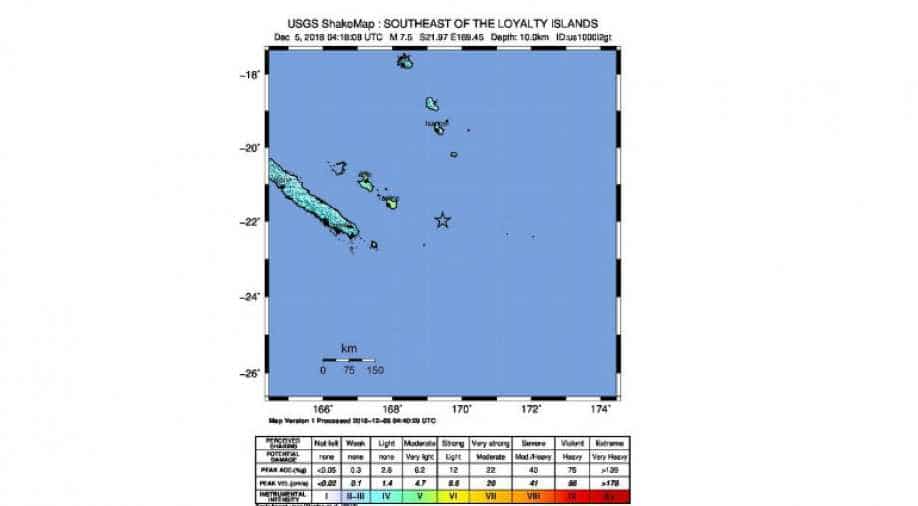 A handout picture made available by the United States Geological Survey shows the location of an earthquake that hit off the east coast of New Caledonia, on December 5 . Photograph:( Agencia EFE )

The quake was reportedly followed by three other termors with magnitudes ranging from 5.7 to 6.1.

According to the US Geological Survey, a 7.7-magnitude earthquake struck in South Pacific on Thursday generating a small tsunami as New Zealand authorities told residents to move away from waterfront areas due to expected ocean surges.

Fiji had also issued a tsunami warning after a wave of 0.3 metres, however, later it was cancelled even as the Australian Bureau of Meteorology said that a tsunami has been generated while issuing an alert for Lord Howe Island, but added that no evacuation was needed.

There were no reports of casualties or damages due to the tsunami. The European Mediterranean Seismological Centre (EMSC) said the quake's epicentre was 417 km east of Tadine, a town in the French territory of New Caledonia, while adding that there were no immediate reports of damage in the area.

The Pacific which is located in the "Ring of Fire"  experiences frequent earthquakes. Three years ago an earthquake and a  tsunami on Indonesia's Sulawesi island had over 4,300 dead and several missing.

In 2004, a 9.1-magnitude quake off the coast of Indonesia's Sumatra island had led to large scale destruction with the tsunami killing 220,000 people in the region.