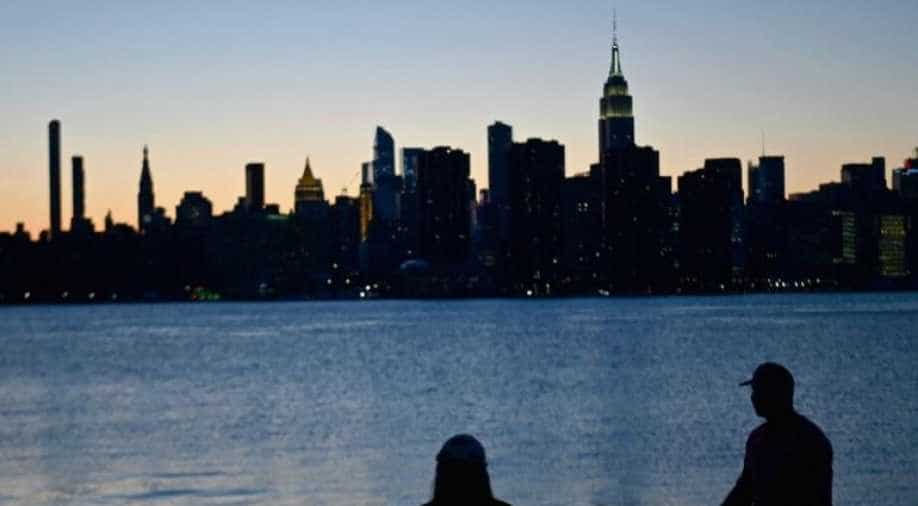 (Fiel photo) People look at the Manhattan skyline before watching a movie at the Skyline Drive-In NYC cinema experience on June 16, 2020 in the Brooklyn Borough of New York City, amid the novel coronavirus pandemic.  Photograph:( AFP )

The plan to give permanent status to thousands of "streateries" outside of restaurants and bars has the support of Mayor Eric Adams and the New York Hospitality Alliance, an industry association

The New York City Council held a hearing on Tuesday to consider a plan to make sidewalk dining - first allowed in 2020 as a temporary measure to help blunt economic fallout from the coronavirus pandemic - part of the new normal.

The plan to give permanent status to thousands of "streateries" outside of restaurants and bars has the support of Mayor Eric Adams and the New York Hospitality Alliance, an industry association.

The Uniformed Firefighters Association has complained the sheds have narrowed streets so much as to delay their response and prevent them from safely raising ladders to windows.

The Coalition United for Equitable Urban Policy, an alliance of local businesses and residents, held a "Chuck the Sheds" protest rally over the weekend.

The 51-member council body will vote on the bill at a later date if it makes it through a committee vote.

The outdoor cafes were first permitted on a temporary basis under an “Open Restaurants” initiative to help offset the closure of indoor dining because of the pandemic, and later when severe capacity restrictions were imposed.

Restaurants were quick to set up makeshift structures of plywood and plastic sheeting, and many later installed more elaborate structures, some with heaters, suggesting they hoped the program was here to stay.

City officials and the restaurant industry have lauded the initiative for saving thousands of restaurants from closing permanently and enabling tens of thousands of workers to keep their jobs.

More than 12,000 restaurants and bars across New York, once the pandemic epicenter, take part in the program and 360 streets have been shut down to cars to expand space for outdoor restaurant eating, according to an online tracker.

"Beyond its positive economic impact, outdoor dining reimagined what the city could do with our streets," said Velázquez, who chaired the committee holding the hearing.

Council members at Tuesday's hearing questioned whether the city transportation department had the capacity to oversee such a program.

Some, concerned about the thousands of complaints logged against some restaurants, questioned what standards and enforcement measures would be put in place to ensure safety and cleanliness.