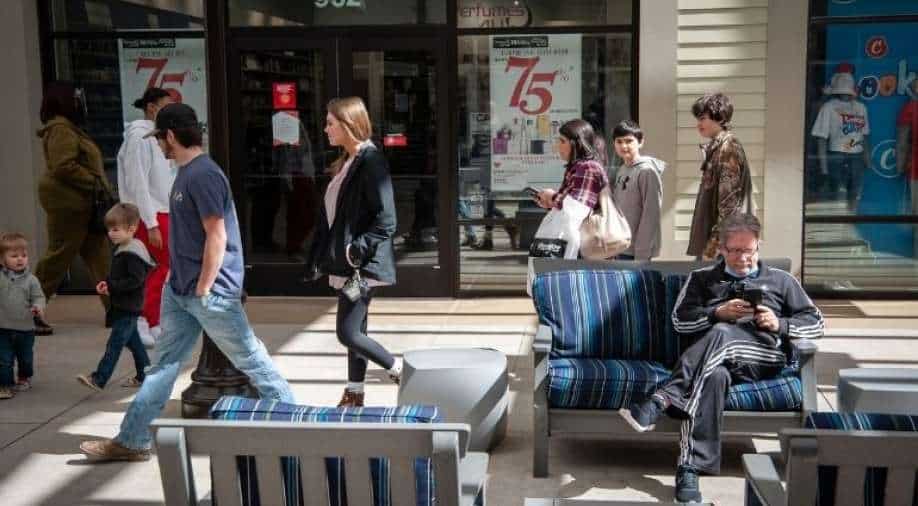 Shoppers an outlet mall in Southaven, Miss., March 6, 2021. The economic relief plan that is headed to President Joe Biden’s desk has been billed as America’s most ambitious anti-poverty initiative in a generation, but inside the $1.9 trillion package there are plenty of perks for the middle class too. (Rory Doyle/The New York Times) Photograph:( The New York Times )

An analysis by the Tax Policy Center published this week estimated that middle-income families, those making $51,000 to $91,000 per year, will see their after-tax income rise by 5.5% as a result of the tax changes and stimulus payments in the legislation.

The economic relief plan that is headed to President Joe Biden’s desk has been billed as the United States’ most ambitious antipoverty initiative in a generation. But inside the $1.9 trillion packages, there are plenty of perks for the middle class, too.

Whether they are direct stimulus payments, an array of tax benefits or an expansion of the Affordable Care Act, the bill will bring a big economic lift to middle-income families. In some cases, those households will have weathered the pandemic relatively unscathed, and those who are concerned about the cost of the legislation have suggested that the definition of the middle class has expanded to include families who are actually well-off.

An analysis by the Tax Policy Center published this week estimated that middle-income families, those making $51,000 to $91,000 per year, will see their after-tax income rise by 5.5% as a result of the tax changes and stimulus payments in the legislation. The increase for that income group is about twice as generous as what it received after the 2017 Tax Cuts and Jobs Act.

Targeting a relief package more narrowly to help those solidly in the middle class has been challenging, given the cost of living varies widely in different parts of the United States.

“For a lot of the country, $160,000 buys you the house on the hill,” said Howard Gleckman, a senior fellow at the Urban-Brookings Tax Policy Center, who pointed out that a couple making that level of income in New York City, for example, would be stretched.

Marc Goldwein, the senior policy director for the Committee for a Responsible Federal Budget, estimated that a family of five with a household income of $150,000 could receive about $10,000 from the federal government this year, suggesting that the stimulus package would do much more than alleviate poverty.

Many economists argue that directing aid to the poorest will have the biggest benefit because they are most likely to quickly turn around and spend the money on groceries, rent and other necessities, stimulating the economy. However, after a year of avoiding travel and dining, middle-class families are also likely to splurge as the pandemic subsides.

The Biden administration and Democrats in Congress are betting that by flooding the economy with cash they can kick-start a faster recovery.

Here are some of the ways that the bill will help the middle class.

This time around, Americans will receive stimulus checks of up to $1,400 per person, including dependents.

Those thresholds are lower than in the previous relief bills, to better ensure that those who need the checks the most receive them. But they will still be one of the biggest benefits enjoyed by those who are solidly in the middle class.

The relief package, known as the American Rescue Plan, includes some important changes to existing tax policy to help families with children who have been struggling to care for them as the pandemic closed schools.

The legislation also bolsters the tax credits that parents receive to subsidize the cost of child care this year. The current credit is worth 20% to 35% of eligible expenses with a maximum value of $2,100 for two or more qualifying individuals. The stimulus bill increases that amount to $4,000 for one qualifying individual or $8,000 for two or more.

The value of the credit will be calculated by taking up to 50% of the value of eligible expenses, up to certain limits, depending on household income. The law would begin to reduce the credit below 20% for households with income of more than $400,000.

After four years of being on life support, the Affordable Care Act is expanding, a development that will largely reward middle-income individuals and families, since those on the lower end of the income spectrum generally qualify for Medicaid. The relief legislation expands the subsidies for buying health insurance. As a result, a 64-year-old earning $58,000 would see monthly payments decline to $412 from $1,075 under current law, according to the Congressional Budget Office.

The legislation will now make upper-middle-income Americans eligible for aid to buy plans on the government exchanges, and premiums for those plans will cost no more than 8.5% of an individual’s modified adjusted gross income.

Another benefit to the middle class is that the stimulus package makes it easier for newly unemployed workers to get insurance through a federal program called COBRA, which allows people to buy their former employers’ health benefits. COBRA premiums will be fully paid for through September.

A Rescue for Pensioners

One of the more controversial provisions in the legislation is the $86 billion allotted to fixing failing multiemployer pensions.

The money is a taxpayer bailout for about 185 union pension plans that are so close to collapse that without the rescue, more than 1 million retired truck drivers, retail clerks, builders and others could be forced to forgo retirement income. The plans cover about 10.7 million active and retired workers, many of whom are middle class and work in fields like construction or entertainment where the workers move from job to job.

The legislation gives the weakest plans enough money to pay hundreds of thousands of retirees — a number that will grow in the future — their full pensions for the next 30 years.

But the measure has drawn criticism because the pensions were failing well before the pandemic.