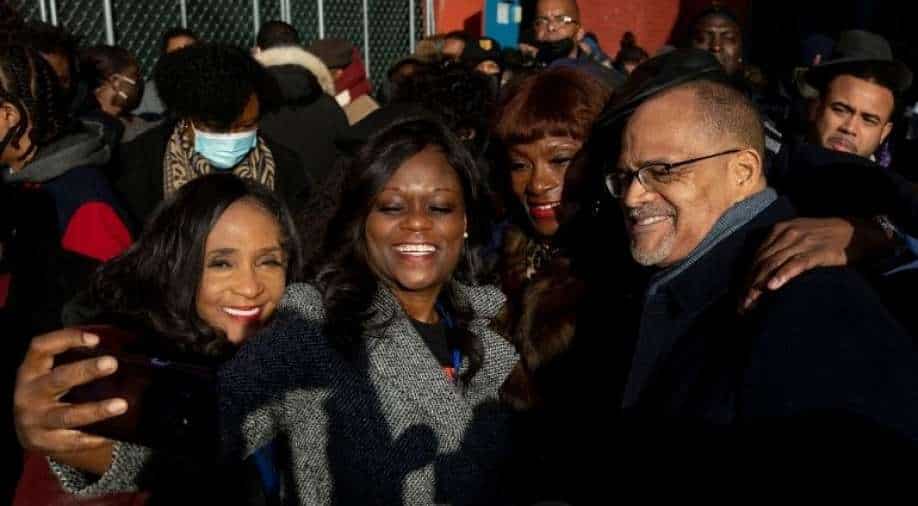 Mayor-elect Eric Adams introduced Banks, his first cabinet-level appointment, at a news conference on Thursday with stern warnings about the state of the nation’s largest school system

David C Banks began his first morning as New York City’s schools chancellor-in-waiting with a warning to the city’s educational bureaucracy: The nation’s largest school system had betrayed too many of its students by paying the salaries of administrators who did not improve the lives of children, funded by a bloated budget that produced abysmal results for too many Black and Latino students.

Speaking at a packed, celebratory outdoor news conference at Public School 161, the elementary school he attended as a child in Crown Heights, Brooklyn, Banks thundered: “I have a message for a lot of folks who are down at Tweed who think they know me,” referring to the Department of Education’s downtown headquarters.

To laughter and cheers, he issued a rhetorical question to administrators: “If you left, and your job disappeared tomorrow, would that change anything that’s going on in any of our schools?”

Banks, a longtime friend and adviser to Eric Adams, is the mayor-elect’s first commissioner-level appointment, and his remarks, along with Adams’, were feisty opening salvos that signal their plans for major changes in the sprawling system.

Saying that “65% of Black and brown children never achieve proficiency” on state standardized exams, Banks said that statistic reflected “a betrayal,” adding: “Think about if everybody in the Department of Education went home and all the kids went to school, you could get those same results,” he said.

But Mayor Bill de Blasio’s three schools chancellors all made similar promises. While test scores and graduation rates have risen citywide during the current mayor’s tenure, profound problems remain, from entrenched racial segregation to lack of support services for the city’s roughly 100,000 homeless students. Bringing sweeping change to a system that commands a $38 billion annual budget and employs 150,000 adults inside schools alone has always been more aspiration than reality for chancellors.

Adams said there was no alternative to bold action. “Let me tell you something, if 65% of white children were not reaching proficiency in this city, they would burn the city down,” he said. The mayor-elect said there has been “no urgency” about improving schools, in what appeared to be a veiled swipe at the de Blasio administration.

Banks created a network of all-boys public schools, the Eagle Academy for Young Men, that helps demonstrate just how challenging it is to improve performance on standardized exams among the city’s neediest children.

The network, which has five schools in each New York City borough and one in Newark, New Jersey, stands apart from neighboring public schools by employing many male teachers of color, instituting a strict discipline code and holding longer school days and gatherings on Saturdays. The schools encouraged students to have frequent discussions about racial identity and cultural pride long before culturally responsive education was a subject of national debate.

But while two of the schools have done well on standardized tests, three have extremely low test scores and are considered some of the lowest-performing schools in the state.

The lowest scores are concentrated in the middle school grades, when students are new to the Eagle schools. The schools, which serve students in grades 6 through 12, have relatively high graduation rates, indicating that many students improve over their years there.

Banks spoke broadly about exams and accountability Thursday, without mentioning his own schools’ struggles. “The very fabric of how we’re actually measuring our children, and measuring progress for our schools, is fundamentally flawed,” he said. “It doesn’t mean that test scores don’t mean anything; they do. They just don’t mean everything.”

The lagging standardized test performance in some Eagle schools — despite their strong leadership and focus on structure — shows just how much work Banks has ahead of him as he seeks to improve hundreds of schools that have struggled for decades.

How Banks and Adams will actually go about addressing the segregation, discrimination and a long list of failed initiatives that have helped create the city’s extremely uneven school system is an open question.

Adams has immense power to change any aspect of the sprawling school district, with its nearly 1 million children and 1,600 schools. But he pledged Thursday to empower Banks and to disagree only behind closed doors.

What was left unsaid during Thursday’s news conference was that fundamental changes to city schools typically require at least tacit approval from the United Federation of Teachers. The union did not endorse Adams during the Democratic primary, and the mayor-elect’s support for charter schools and skepticism toward education bureaucracy do not bode well for the union.

Michael Mulgrew, the UFT’s president, who is a constant presence at major announcements, did not attend Thursday’s news conference. The leader of the city’s principals’ union, which has had a good relationship with Banks since he was himself a principal, was in the crowd.

As messages of support for Banks poured in from various organizations and advocacy groups Wednesday evening, the union was quiet. After the news conference, the union issued a statement that said, “We have worked well with David in the past, and we look forward to continuing that relationship as he takes on the challenge of running 1,600 schools still suffering from the effects of the pandemic.”

The UFT, which is encountering an unusual moment of political pressure as parents in New York and across the country raise questions about school closures during the pandemic, already knew it would not have a strong ally in City Hall.

But union officials are especially concerned about the appointment of Daniel Weisberg, a top official under former Mayor Michael Bloomberg, to first deputy chancellor. Weisberg helped lead Bloomberg’s push to move weak teachers out of the system and has become something of a villain at the UFT. His appointment is a signal that the incoming administration, which owes the union nothing politically, intends to focus on teacher quality in ways that may prove uncomfortable for the UFT.

Other statements were much more effusive, including from the leaders of organizations focused on supporting children with disabilities and key figures in the city’s charter school movement. De Blasio has wavered between ambivalence and straightforward hostility toward charters.

Basil Smikle, a professor of public policy and longtime Democratic strategist, said Banks’ support for charters aligned with his mission at Eagle. “He is very understanding of the history, that communities of color seeking equity have always found alternatives to traditional public schools,” he said.

Adams, acknowledging the sky-high expectations and lofty promises he and his chancellor were making, said it would be fair to judge his track record on education only at the end of his full first term.

Adams and Banks did not speak much about specific policies during Thursday’s event, and Banks went so far as to ask reporters not to ask about hot-button issues like the future of the city’s gifted and talented program, since the day’s message was intended to be broader than any one policy.