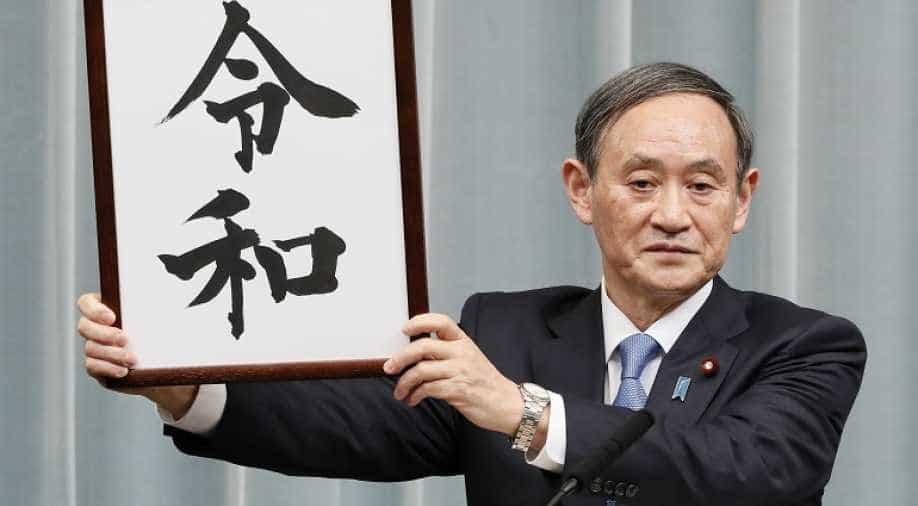 The era name, or " gengo ," is used widely in Japan - on coins, calendars, newspapers and in official paperwork. Although use of the Western calendar has become widespread, many Japanese count years by gengo or use the two systems interchangeably

Japan's new imperial era to begin on May 1, when Crown Prince Naruhito becomes emperor, will be called Reiwa, the government said on Monday, adding that Prime Minister Shinzo Abe would explain its meaning in a national address.

The era name, or "gengo," is used widely in Japan - on coins, calendars, newspapers and in official paperwork. Although use of the Western calendar has become widespread, many Japanese count years by gengo or use the two systems interchangeably.

Naruhito's ascension to the Chrysanthemum Throne will come a day after his father, Emperor Akihito, abdicates on April 30, ending the Heisei era, which began in 1989. Akihito will be the first emperor to abdicate in Japan in over two centuries.

Suga made the announcement a month early so government offices and companies can update computer software and make other preparations to avoid glitches when it comes into effect next month.

Guidelines stipulate that the era name should be appropriate to the ideals of the nation, consist of two "kanji," or Chinese characters, and be easy to write and read. It cannot be in common use or have been used previously.

The two characters used in the new name mean "order" or "command" and "peace" or "harmony".

Scholars and bureaucrats had drawn up a list of candidates, and the cabinet made the final decision after consulting an advisory panel.

Traditionally, the characters have been selected from ancient Chinese texts, but this time they were from the Manyoshu, an ancient collection of Japanese poetry.

City offices and government agencies have been preparing for the new era name for months, aided by computer systems firms such as Fujitsu Ltd and NEC Corp.

Many computer programmes have been designed to make it easy to change the gengo.

The gengo system was imported from China centuries ago but the era name is more than just a way of counting years.

Over time, it comes to symbolise the national mood of a period, similar to how "the '60s" evokes certain images, or how historians refer to Britain's "Victorian" or "Edwardian" eras, tying the politics and culture of a period to a monarch.

The three decades of the Heisei era saw the collapse of Japan's frothy "bubble" economy, years of economic stagnation, a series of natural disasters and the spread of social media.